The replacement of dilapidated bridges will also severely affect the flow of traffic in the more than 2,200-kilometer-long North Rhine-Westphalian motorway network in the new year. 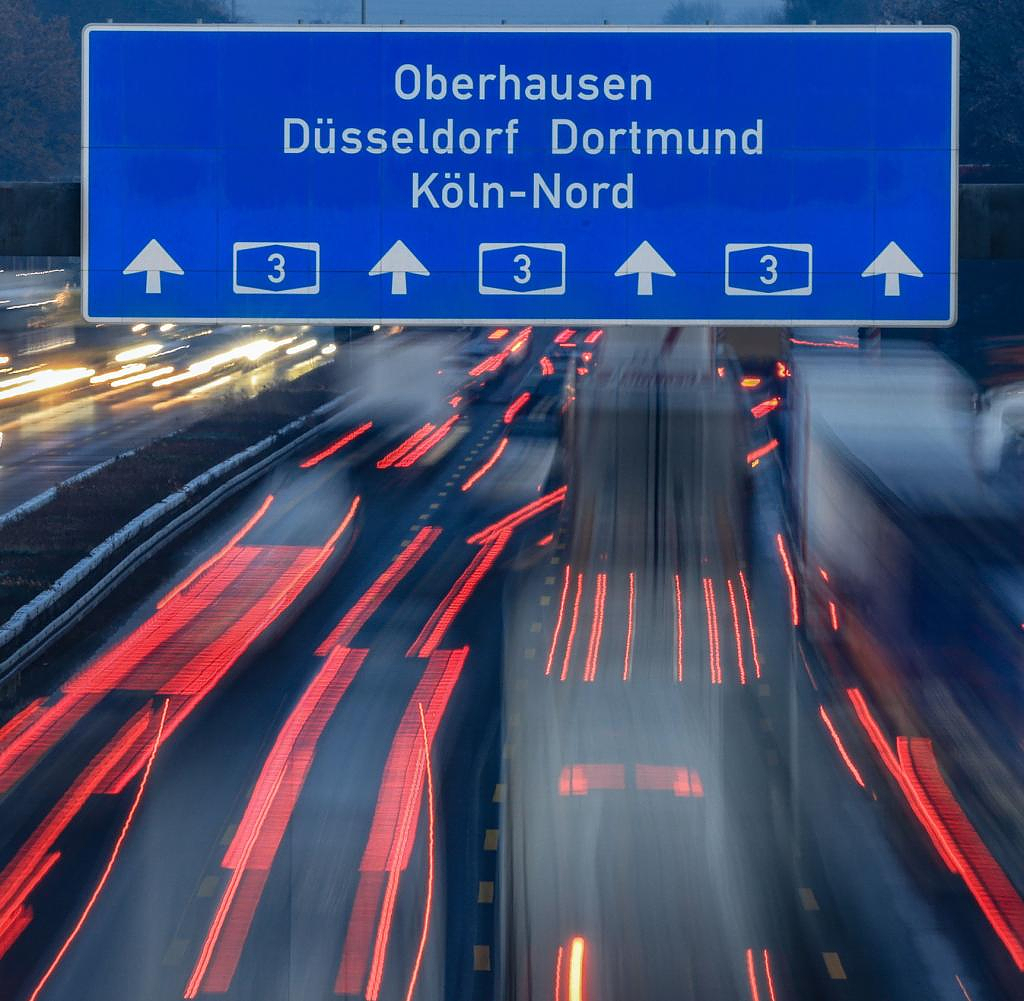 The replacement of dilapidated bridges will also severely affect the flow of traffic in the more than 2,200-kilometer-long North Rhine-Westphalian motorway network in the new year. The Rhineland branch of Autobahn GmbH des Bundes has listed the construction sites with the highest risk of congestion at the neuralgic junctions (AS), motorway junctions (AK) and motorway triangles (AD) for the German Press Agency in Düsseldorf for 2023.

Many bottlenecks are familiar to commuters and truck drivers. Almost all of the "Top 10" traffic jam routes have something to do with the replacement or new construction of dilapidated bridges. The metropolitan areas of the Ruhr area and the Rhine line continue to be the hardest hit. Here are the expected traffic jam leaders for the new year:

A1 AK Köln-Nord - AS Burscheid: The first part of the bridge for the new construction of the Rheinbrücke in Leverkusen is expected to be completed by the end of 2023. The barrier system is then to be dismantled, the dilapidated old Rhine bridge torn down and the second new Rhine bridge, which runs parallel to the first new building, is to be built on the same site. Until then, the diversions of truck traffic and construction work on the Cologne ring road will continue to cause problems on the A1 between Burscheid and the Cologne-North junction in the two-way approach to the Rhine bridge.

A1 area AS Wuppertal-Nord - AK Münster-Süd: In this long section of the A1, the structures "Linderhauser Straße" (AK Wuppertal-Nord), "Hengstey" (in the Hagen area probably until mid-2023), the overpass structure in the Westhofen junction (A1/A45) and the “Liedbachtal” structure (Dortmund/Unna junction) renewed. In addition, the multi-year six-lane expansion of the A1 between Kamen and Münster has begun (first section between AS Münster-Hiltrup and AS Ascheberg).

A2 AD Bottrop - AK Oberhausen: In this section, the entire roadway will also be renovated beyond 2023. With the very high traffic volume there of around 120,000 vehicles per day, traffic jams - caused by the lanes being narrowed in the construction site area - are difficult to avoid, says Autobahn GmbH. "The traffic jam sometimes extends back to the A31."

A3 AD Cologne-Heumar: By 2029, all bridge structures here must be replaced. Work on replacing the existing KVB bridge has already begun. Since mid-October 2021, there have been two narrowed lanes in each direction at the level of the A3/A4 ramp. All four lanes were transferred to the lane in the direction of Frankfurt. This traffic routing is expected to remain in place until the end of 2023.

A3 junction Breitscheid – junction Oberhausen: In this section of the A3, the Kaiserberg motorway junction will be expanded from the beginning of 2023. In order to make the highly frequented junction fit for the future, Autobahn GmbH Rheinland is renovating all routes, bridges and ramps here. In addition, both motorways will have an additional lane in each direction at the intersection. "This should improve the traffic situation in the already heavily used and traffic jam-prone junction, which will be even more frequented in a few years," explains the GmbH - according to its own statements, Europe's largest motorway operator. "The extensive work requires several traffic jam-prone interventions on both the A3 and the A40 and will last for several years." The Leverkusen traffic center also expects traffic jams on the alternative routes in the Duisburg area.

A42 AS Duisburg-Beeck – AS Duisburg-Neumühl: Several bridges are also due to be repaired on the A42. At the same time, noise protection walls will be renewed there and the road will be renovated. Meanwhile, short-term closures must be expected again and again. The work should be completed by mid-2023.

A43 AK Recklinghausen – AS Bochum-Riemke: The A43 will be expanded to a total of six lanes. The measure also includes the construction of more than 20 new bridges and a new tunnel in the Herne nuclear power plant, expected to be completed by 2030. In addition, the bridge over the Rhine-Herne Canal has only limited load-bearing capacity and was closed to motor vehicles over 3.5 tons.

A45 Hagen junction – Olpe-Süd junction: The “Rahmede” viaduct between the Lüdenscheid-Nord and Lüdenscheid junctions will remain closed until it is replaced. Since the diversions in the subordinate network are overloaded, long-distance traffic should use the large-scale diversions. This applies to both directions.

A46 AS Haan-Ost – AS Wuppertal-Oberbarmen: The Westring bridge between AS Haan-Ost and AS Wuppertal-Cronenberg has been completed. Remaining work on the new building is currently underway. In the entire area of ​​the A46 from the Haan-Ost junction to Wuppertal-Oberbarmen, further lanes and bridges will have to be renovated in the next few years. From the spring of 2023, a surface renewal lasting several months is due from Junction Wuppertal-Wichlinghausen in the direction of Dortmund. In the low-traffic times at night and on weekends, single-lane traffic routing is planned. The entire renovations are expected to last until 2026.