The strike continues at TotalEnergies, the first holidaymakers line up at service stations

In front of a Boulogne-Billancourt station, west of Paris and at the gates of the A13 motorway which leads to Normandy, a line of vehicles stretched, engines off and warning lights on. 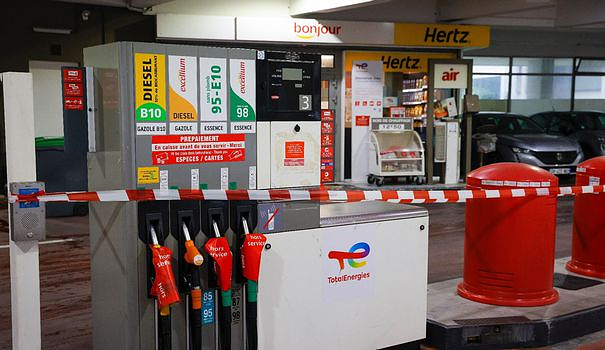 In front of a Boulogne-Billancourt station, west of Paris and at the gates of the A13 motorway which leads to Normandy, a line of vehicles stretched, engines off and warning lights on.

“I have left the car in the garage as much as possible in the last few days, I have been working from home”, explains to AFP Mickael Grumen, 43, who is waiting to collect gasoline at 2.040 euros per litre. "I really waited for the last moment, to be in the red to fill up because I plan to go on vacation to Deauville".

Service stations are facing significant supply difficulties due to the strike movement initiated on September 27 in the refineries and depots of TotalEnergies, where employees are demanding a salary increase in the face of inflation and the giant profits garnered by the oil company.

If the strikers at the Donges refinery (Loire-Atlantique), the "Flandres" depot, near Dunkirk (North), and the La Mède biorefinery (Bouches-du-Rhône) decided on Wednesday to resume work after a agreement with management, two oil sites renewed the strike on Thursday.

In Gonfreville in Normandy, it is renewed "until October 27", the day when TotalEnergies must announce its results for the third quarter, "unless the management contacts us before", announced Ludovic Desplanches, elected CGT.

The movement was also renewed at the fuel depot in Feyzin (Rhône).

After a peak in shortages last week, gasoline and diesel shortages were reduced this week, while remaining unprecedented in recent history. According to Francis Pousse, representative of service stations at Mobilians, which brings together 5,800 traditional stations (excluding mass distribution), around 17% of service stations still lacked fuel on Friday.

“It is improving significantly,” he argued on Classic Radio, estimating that a return to normal should take place within “five to seven days”.

But the pressure on the government is mounting as schools close on Friday evening for a two-week holiday.

"I'm not going to tell you that the situation will be 100% settled for departures on vacation, but the French can leave confident", assures Elisabeth Borne in an interview with Liberation.

The Vinci Autoroutes group for its part announced on Wednesday that at least 90% of the service stations in its network were able to supply fuel.

On the side of Eiffage, which manages another network of motorways, "continuity of service is ensured at 82% for unleaded gasoline and 88% for diesel".

The government promised on Friday that "the busiest service stations in the context of holiday departures will be served as a priority". He also called for the end of "prefectural ration orders" and mobilized "tank trucks from the operational energy service of the Ministry of the Armed Forces" in the most tense areas, he said in a press release.

In a hurry to speed up deliveries to the stations, the government once again requisitioned employees to work on the Feyzin site on Thursday, which should help the entire Auvergne-Rhône-Alpes region.

The CGT says it proposed Wednesday, without success, a "protocol for the end of the conflict" to the management of the group, providing in particular for "local negotiations on the specific problems raised by the strikers".

But TotalEnergies argued that there was no reason to reopen negotiations, an agreement having been concluded with the two majority unions of the group, the CFE-CGC and the CFDT. A text that the CGT has not signed.

The agreement provides for a general increase of 5% in salaries, accompanied by individual increases and an exceptional bonus of between 3,000 and 6,000 euros. The CGT is demanding a 10% wage increase.

A movement had also taken place within Esso-ExxonMobil, before being lifted last week after the conclusion of a wage agreement.