The sportswoman Elnaz Rekabi welcomed as a heroine in Tehran

Her participation in the competition without a veil in a shirt in the colors of Iran, wearing only a bandana, had been interpreted as a gesture of solidarity with the demonstrations sparked a month ago by the death of the young Iranian Kurd Mahsa Amini after his arrest by the vice police. 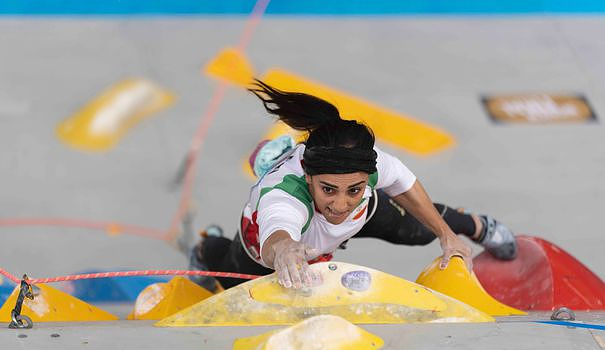 Her participation in the competition without a veil in a shirt in the colors of Iran, wearing only a bandana, had been interpreted as a gesture of solidarity with the demonstrations sparked a month ago by the death of the young Iranian Kurd Mahsa Amini after his arrest by the vice police.

The Islamic Republic indeed imposes on Iranian sportswomen the wearing of the veil even in competitions abroad.

"Elnaz is a heroine", shouted dozens of people massed in front of the airport terminal to welcome the young woman to applause and cheers, brandishing cell phones to film the scene.

The crowd, where there were women not wearing the veil, then surrounded a white van and a car where the sportswoman and members of her team would have been seated, who left the airport, still to applause, for a destination unknown.

Dressed in a black hooded jacket and a baseball cap, Elnaz Rekabi was welcomed into the terminal by her relatives, before speaking to the media.

"Due to the climate during the finals of the competition and the fact that I was called to start when I was not expecting it, I found myself entangled in my technical equipment (...). Because of that, I didn't pay attention to the headscarf I should have worn," she said.

"I returned to Iran in peace, in perfect health and according to the planned program. I apologize to the Iranian people for the tensions created," she said, adding that she had "no intention of saying goodbye to the national team".

The Islamic Republic has been accused several times by human rights defenders of provoking forced confessions or statements on television or on social networks.

Already on Tuesday, the sportswoman had presented on her Instagram account, with more than 200,000 subscribers, "apologies for the concern" that she may have caused and assured that the decision to remove her veil was "not intentional" but motivated. by the call to perform the test earlier than scheduled.

Human rights defenders outside Iran had expressed concern over her fate, with several of her friends saying they could not reach her.

The Iranian embassy in Seoul had denied "all false information and disinformation" about her situation and said she had left South Korea with her teammates on Tuesday.

Elnaz Rekabi wore a bandana during the bouldering event and a headband showing his hair during a second event, according to images released by the International Climbing Federation.

The competition, where she placed fourth, took place on Sunday, a month to the day after the death of Mahsa Amini, arrested on September 13 in Tehran by the morality police who accused her of having broken the strict dress code of the Islamic Republic for women, including the wearing of the veil.

His death on September 16 sparked a wave of protests across the country. These continue a month later despite the crackdown which has left at least 122 dead, according to a report by the NGO Iran Human Rights (IHR), based in Oslo, while hundreds of people have been arrested.

Sport has become an extremely sensitive topic in Iran since these protests, with several prominent Iranian sportswomen speaking out in support of women's rights. Famous footballers have also come under fire for comments about the move, such as soccer legend Ali Daei, who had his passport briefly confiscated.