The Sky ECC affair, a dizzying dive into the methods of drug traffickers

"It's as if we were at the table with the criminals", summarized the director of Europol Catherine De Bolle. 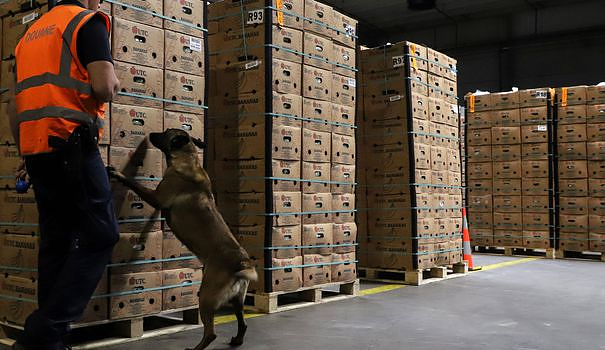 "It's as if we were at the table with the criminals", summarized the director of Europol Catherine De Bolle.

Named after a Canadian brand of "cryptophones" allowing secure exchanges, the Sky ECC dossier, which has enabled the dismantling in recent weeks of a cocaine "super-cartel" in Dubai and Europe, has emerged at large day in March 2021.

Belgium and France then simultaneously announced a first large-scale raid made possible by the deciphering of the network security code, a technical feat with which Dutch investigators were associated.

In Belgium, 48 people were arrested on March 9, 2021 after more than 200 searches, a mega-operation presented as the culmination of work analyzing several hundred million messages.

The police had been working there for several years. It reveals that the peaks of activity on this network are observed around Antwerp, the first point of entry into Europe for cocaine from South America. In 2021, security forces seized 90 tons.

French justice is also involved. An investigation was opened in 2019 on this "undeclared" communications system, hosted on servers installed in France.

Twenty months later, Belgians and French agree that "there is a before and after Sky ECC" in the fight against drug trafficking in Europe.

The mass of information is phenomenal, "more than a billion messages", explains, in an interview with AFP, Eric Snoeck, the head of the federal judicial police in Belgium.

“We used a relatively small part of the available information,” he adds. "It's a work that is ongoing and will take years."

For a year and a half, more than 1,200 people have been arrested and questioned in Belgium, and 510 judicial investigations launched or enriched thanks to information taken from Sky ECC, according to the latest official figures.

Europol announced Monday that the exploitation of messages exchanged on the network has allowed the dismantling of a "super-cartel" which alone controlled a third of cocaine trafficking in Europe. Result: 49 suspects arrested in five countries, including six drug "barons" in their Dubai lair.

More than half of the investigations are the responsibility of the Antwerp judicial police alone, which opened 257 new files.

The port city is in the foreground but "organized crime extends to all regions of the country", underlined Belgian Prime Minister Alexander De Croo in September, announcing reinforcements in the investigation services.

First observation in the study of the messages exchanged: the extreme violence to which the criminal organizations resort.

"They imported into Europe behaviors that were believed to be confined to South America," notes Rémy Heitz, attorney general at the Paris Court of Appeal. "Terror, assassinations, people being executed live in front of hilarious spectators. This is how this traffic is managed."

The Belgian Eric Snoeck evokes for his part "a completely unprecedented violence" by citing as an example the discovery of containers fitted out in torture rooms in the Netherlands.

"For a few thousand euros, because the contract has not been respected, we do not hesitate to kill, after sometimes hours of suffering, people with whom we were cooperating a few hours earlier, it sends shivers down the spine. “, he says.

Reading the messages exchanged on the encrypted network also made it possible to locate in Serbia, near the capital Belgrade, a "house of horror", where victims were dismembered and their remains crushed in a meat grinder.

Along with Dubai, where many network leaders have taken refuge, the Balkan region is also flashing on the international traffic map. After English, Albanian is the second most used language on Sky ECC, investigators have found.

Data from the application has been shared with at least 22 countries, including several Latin American states where cocaine is produced or transited (Colombia, Brazil).

In addition to the "Mocro-mafia" (traffickers of Moroccan origin acting from the Netherlands) and the Calabrian "Ndrangheta", Sky ECC revealed the presence on Belgian soil of "representatives of South American cartels", according to Eric Snoeck.

“I am very worried”, confides a French magistrate. "We underestimate the dangers of this traffic in terms of destabilization of States and violence propagated to all of society."