The Sierra de Baza's 1,200 deer population is not affected by the punctual mortality.

The deer mortality in Sierra de Baza Natural Park over the past two months seems to have diminished and is now back to normal. 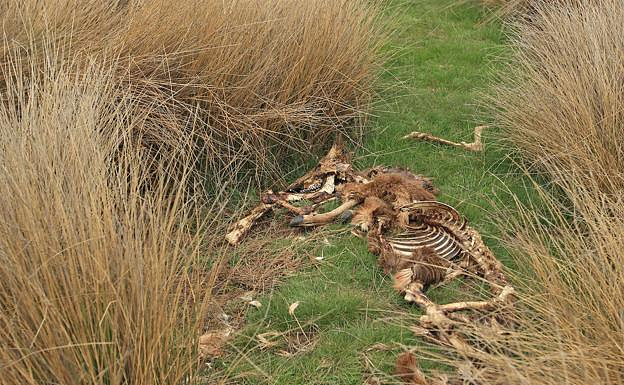 The deer mortality in Sierra de Baza Natural Park over the past two months seems to have diminished and is now back to normal. The Sierra de Baza Project Association has been traveling a large part of the park in the past three days and has not seen any deer carcasses. Yes, there are still remains of deer carcasses that were eaten by vultures, foxes and eagles.

Although the details of the episode, which led to the deaths of 100 to 200 deer, are still unclear, it seems that the incident is over. The deer that have been sighted seem to be healthy. Jose Angel Rodriguez, the president of Sierra de Baza Project Association, stated this. He and other members of his association toured the park last Saturday and Sunday, but did not find any new bodies. On Sunday, however, they were able to see 16 deer females with their young and two males. Although all the animals were healthy, the nervousness and restlessness displayed by the deer caught their attention. They fled in terror, sometimes even colliding with the hunting valleys in other parts of the park. Rodriguez, a passionate nature photographer and connoisseur of fauna in this protected area, said that he'd never seen deer behave so fearfully and scattering like he did the past two days.

The association members only discovered a few deer skulls on their tour of the park's 52,337 hectares. They began the tour in Cortijo de Santaolalla.

Rodriguez said that the deaths of deer in such bizarre circumstances, without violence, is unlikely to affect the Sierra de Baza population, which has an estimated 1,200 deer. There were many more in other times.

It is now known that the first dead deer appeared at the Natural Park Management Board meeting, which was held to address the grave problem of the Mistletoe Plague.

The Junta de Andalucia is yet to rule on the fate of a significant portion of the deer population or the causes of their deaths. Results from various analyses that were performed are still awaiting the results. Results of necropsies on at least three dead animals.

If the Directorate of the Natural Park anticipates that the results will arrive within the next few days it is correct. They were expected to arrive last week.

The Natural Park directorate did not issue instructions to the shepherds about stopping putting their sheep flocks in the park. However, word quickly spread about the indiscriminate killing of deer. It was the shepherds who decided to not allow their cattle to graze. The situation has changed already and the herds have been increasing in the Sierra de Baza Natural Park in an area with a lot more grass. It is now that contracts are being signed for their use.

The Sierra de Baza Project proposes several hypotheses about the causes of mortality. These include the drought effects last autumn-winter that affect the animals' health and vitality and leave them extremely weak. They point out that the drought period in March and April was followed by heavy and persistent rains. This could have led to these deaths.

This is the first instance of something similar happening in Sierra de Baza Natural Park. However, there are other evidence that similar events have occurred in Zamora and in Sierra de La Culebra Natural Parks in Cadiz. It is believed that these deaths were caused by stress in animals after an abrupt change in their environment.

Sudden changes in immunosuppression can lead to a decrease in the animal's defenses. This can cause some internal imbalances that can end in their death. Nature was doing its job by choosing the best-prepared specimens.

‹ ›
Keywords:
MortandadPuntualComprometePoblacionCiervosSierraBaza1200Ejemplares
Your comment has been forwarded to the administrator for approval.×
Warning! Will constitute a criminal offense, illegal, threatening, offensive, insulting and swearing, derogatory, defamatory, vulgar, pornographic, indecent, personality rights, damaging or similar nature in the nature of all kinds of financial content, legal, criminal and administrative responsibility for the content of the sender member / members are belong.
Related News