He had already laid out the second scalp. 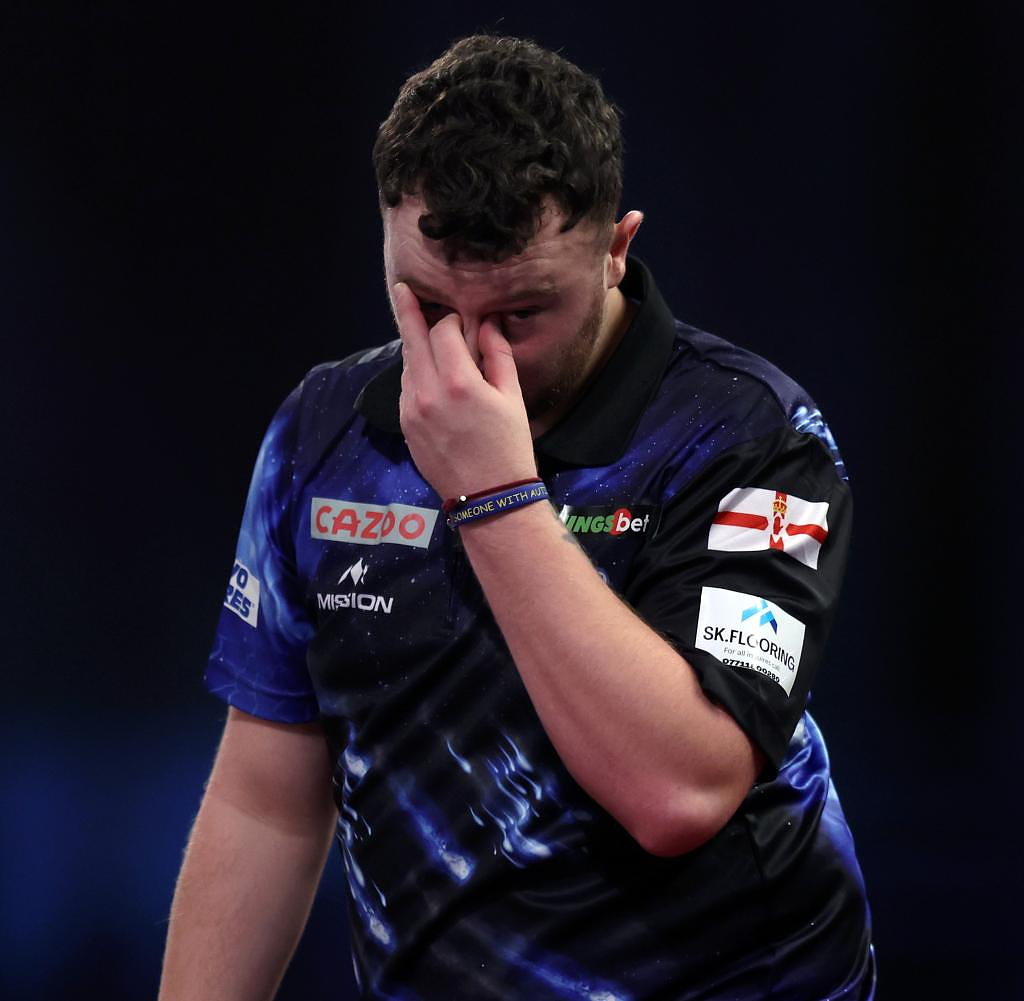 He had already laid out the second scalp. Josh Rock, shooting star on the darts pros' tour, was on the verge of taking Jonny Clayton, the second top 10 player out of the world championship after Nathan Aspinall. The 21-year-old Northern Irishman led in his round of 16 against number seven in the world rankings 2-1 and 3-2, had several chances to make a preliminary decision, but had to learn the hard way in the decisive moments of the match and lost to number seven in the world rankings End with 3:4.

"Rocky", already considered by many to be the future world champion, started his fourth match furiously, overran Clayton with an average of almost 110 points in the first set and followed up with the fourth leg in a row after the break. His clearly experienced opponent blew through, but appeared unimpressed on the board.

The 2021 Premier League winners took set two 3-1 and checked 104 points to win the third round. “The pressure was so great. But I started quite well, then had a little hitch in the middle and was there again at the end,” Clayton summarized later.

Rock used the weak phase to lead again. First he missed three chances in the decider to make it 2:2, but after two mistakes by Clayton he was allowed to go back to the oche and defended his throw-off to make it 2:2. The level remained high despite a few missed opportunities. Clayton, who spectacularly checked 86 points via double 18 and the bullseye in the fourth round, had an average of 97.17 points, while Rock had an average of 96.76 points.

It went the full distance in the fifth set as well, and Clayton once again missed an opportunity to win his third set, this time on double 16. Rock made it 3:2 and now threw to win the match. Clayton nodded his approval.

Rock, who made an impressive World Cup debut at the end of his first season, initially stayed on track, checked to make it 1-0 and attempted a break on the bullseye, but clearly missed. Instead, he then conceded the loss of serve himself. Clayton cleared 122 points with nerves of steel and saved himself a leg later in the seventh set. Ultimately the decisive moment.

Because the 48-year-old also fulfilled his duty at the start of the decisive round, brought his serve through to make it 1-0 and then benefited from his opponent's five mistakes in a row. Clayton made the preliminary decision to make it 2-0 and then it was all over very quickly. The winner's first words were, however, directed at the opponent. "He's a rising star. What a guy, what a player,” Clayton said, raising an eyebrow.

Acknowledgment and also amazement rang in his words. In the quarter-finals on January 1, he meets one of the two Belgians who remained in the tournament, Dimitri van den Bergh or Kim Huybrechts. The World Cup was also worthwhile for Rock, who was still working on a chicken farm in September due to financial problems. With prize money of £35,000, he jumped eleven places in the world rankings to 36th.

With Gerwyn Price, the Welsh number one made the round of the last eight perfect. In the 4:1 win against José de Sousa, however, the "Iceman" had significantly less trouble than his compatriot. At the beginning of the evening, Luke Humphries was the last player to qualify for the round of 16. The number five in the world rankings won 4:3 against Vincent van der Voort from the Netherlands and plays on Friday on Stephen Bunting, who prevailed in a close duel 4:2 against Dave Chisnall. In the afternoon, Rob Cross also qualified for the round of 16 with a clear 4:1 win over Mervyn King. Dirk van Duijvenbode survived six match darts in a marathon match against Ross Smith and won 6:5 in overtime of the seventh set. He now meets Michael van Gerwen.

‹ ›
Keywords:
DartsProfessional Darts Corporation (PDC)PriceGerwynClaytonJonny
Your comment has been forwarded to the administrator for approval.×
Warning! Will constitute a criminal offense, illegal, threatening, offensive, insulting and swearing, derogatory, defamatory, vulgar, pornographic, indecent, personality rights, damaging or similar nature in the nature of all kinds of financial content, legal, criminal and administrative responsibility for the content of the sender member / members are belong.
Related News