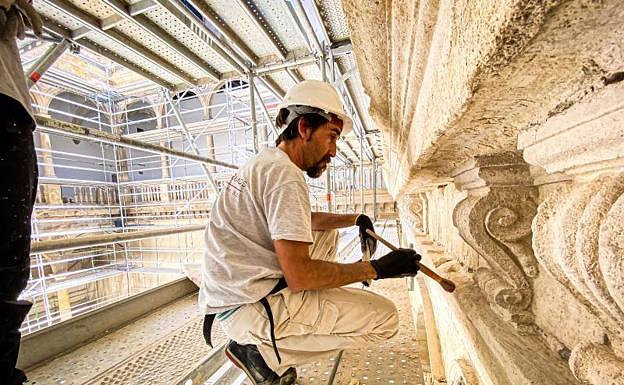 Since the 1980s, The Royal Hospital has been the home of the Rectorate, and also the repository for the many treasures of the university library. Over the centuries, workers have intervened in many instances between these magnificent walls and ceilings. The Royal Hospital was founded in 1504, but it is the result of a combination of styles that reflect the evolution and development of architecture between the 15th century and the 18th centuries. Part of the dependencies of the Royal Hospital are currently being restored to give it strength and to show off the connection between the Hall of Rectors (library) and it.

The Hall of Rectors, the iconic red hall, is where you will see the library and the dome. This wall will now be surrounded by a large glass measuring 3.94 by 3.94 metres. The library, which is truly a temple of architecture and reading, will be visible from the outside. The scaffolding now in place will connect two spaces previously connected by a door that was nearly always shut. Nothing was visible like it will now.

Diego Garzon, the construction manager, stated that they will keep the beams in good condition. From the inside, you can now see the sky. They were able to support approximately four hundred kilos per square mile. This intervention is intended to restore the original gap in dividing wall, which connects the high transept (a space that was previously part of the general library) and the aforementioned room.

They explained that the goal was to save the dome's axial reading and to prevent direct transmission of loads from it to the wooden cladding supporting it, which is currently experiencing some deformations and other pathologies due to the wall's weight. Sources from universities.

This project is funded entirely by the Alhambra plan of the Ministry of Culture and Historical Heritage. The budget amounts to 255,934.98 EUR. Yesterday, Pilar Aranda, the rector, visited the works with Antonio Granados, the regional delegate for Development, Infrastructure, Culture and Historical Heritage of Junta de Andalucia, Granada, and Rocio Diaz, the general director of Board of Trustees of Alhambra and Generalife.

Aranda stated that the Cervantes Institute's international meeting of directors will take place at the Rector’s Office at the end the year. This will be an opportunity to showcase the library heritage and infrastructures to the rest of the world. There will likely be more than one director interested in the Codex Granatensis, an extremely rare document that is kept in the Royal Hospital library.

In November 2021, the last restoration work began. The Junta de Andalucia authorities and the rector were also able see the progress of the performances in the Patio de la Capilla. The earthquakes of last year caused extensive damage.

They also pointed out that the work to renovate the flooring in the upper gallery is being considered as a complementing project. This does not comply with the technical building code required for high-rise buildings. public use; cleaning and restoration the gallery ceiling's wooden cladding; restoration of the portal at the landing of stairs; and some actions around the central fountain of patio. This additional action will require a budget of 630,002.47 euro, also from Alhambra Plan.

The University of Granada's rector highlighted the Board's collaboration to preserve the heritage.

The Board's delegate applauded the University for putting out a tender and executing the Alhambra Plan money. He asked the City Council for their support. "I invite other administrations, especially the City Council with 15 million euros. It is not just about the regeneration of assets. I insist, it's the other essential leg. Employment in a city which has suffered a lot because of the pandemic," Granada stated. He said, "It's an important rehab."

In this collaboration agreement with Alhambra, the University of Granada also received money for the rehabilitation of the Cartuja swimming pool.

Rocio diaz stated that the renewal of Alhambra Plan is currently underway and cost more than 20 millions euros. She stated that "from there, it is possible to continue investing in the City through collaboration agreements."

‹ ›
Keywords:
HospitalRealGanaVentanasPierdePeso
Your comment has been forwarded to the administrator for approval.×
Warning! Will constitute a criminal offense, illegal, threatening, offensive, insulting and swearing, derogatory, defamatory, vulgar, pornographic, indecent, personality rights, damaging or similar nature in the nature of all kinds of financial content, legal, criminal and administrative responsibility for the content of the sender member / members are belong.
Related News