The right to vote for foreigners, the next test for the left wing of the majority

"I'm not going to hide from you that it was not a good surprise", dropped, Wednesday on Franceinfo, the deputy Sylvain Maillard, vice-president of the Renaissance group (ex-LREM), questioned on the initiative of his colleague new president of the Commission of the Laws. 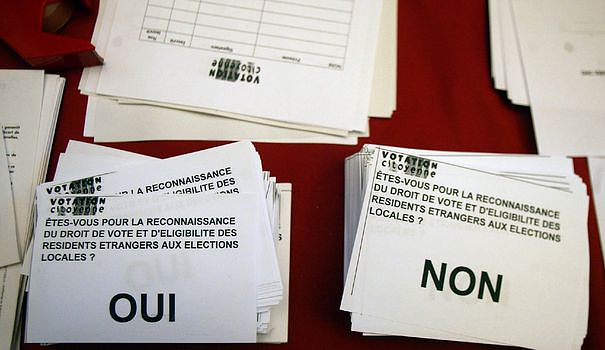 "I'm not going to hide from you that it was not a good surprise", dropped, Wednesday on Franceinfo, the deputy Sylvain Maillard, vice-president of the Renaissance group (ex-LREM), questioned on the initiative of his colleague new president of the Commission of the Laws.

A member of the left wing of the presidential movement, Mr. Houlié tabled a constitutional bill in early August aimed at granting non-EU foreigners the right to vote in municipal elections. "Personally", is it specified in the explanatory memorandum.

This "old sea serpent of the left", according to the unanimous expression, which succeeded neither under François Mitterrand, nor under François Hollande, is without surprise rejected on the right, strongly denounced on the far right and supported by the opposition of all tendencies within the Nupes.

At Renaissance, if there is "no taboo subject", it is the method that would get stuck. "It makes the system turbulent for nothing", judges Mr. Maillard for whom "it is important that we have a debate", that "internally, we can clarify our position in relation to different subjects".

The president of the group, Aurore Bergé, said in Le Parisien that she would like to launch a working group on immigration.

But for the moment, within the majority, the reactions are rather negative. According to those around him, Interior Minister Gérald Darmanin is "firmly opposed". Secretary of State MoDem Sarah El Haïry is there, "in a very personal capacity, not in favor".

"In my opinion, the debate should rather be around citizenship," said in Le Figaro MP Sabrina Agresti-Roubache, spokesperson for the Renaissance group. The same argument as Emmanuel Macron when he was questioned on the subject during the "big debate", in February 2019.

- "Everyone takes a position" -

The only support supported in the camp of the president, but far from the Palais-Bourbon, the former PS minister François Rebsamen committed a platform in the JDD to recall the existence of a text adopted in 2011 in the Senate, then dominated by the left.

A valid vote of this text which lies dormant in the Assembly would open the way to a referendum. And would be "a perfect opportunity to show that the National Assembly can vote for left-wing texts that strengthen the Republic", hopes Mr. Rebsamen.

Can the Assembly "vote left-wing texts"? If, with Elisabeth Borne, Emmanuel Macron has for the first time appointed a Prime Minister from this side of the majority, the scene remains largely dominated by defectors from the right Bruno Le Maire and Gérald Darmanin. And it is mainly with the right that the majority agreed to adopt the first measures of the five-year term.

In this context, why this personal initiative? "No doubt the desire to recall the existence of a more humanist line within the majority", considers a parliamentary source, who underlines that "Houlié had already stood out during the Joint Joint Commission of the health bill. Everyone positions themselves."

But for five years, "there has not been a victory that can be credited to any left wing of macronie", stings Aurélien Taché, who left the presidential party in 2020 and now sits in the environmental opposition.

This initiative on the right to vote for foreigners, "it's a bit of a crash-test for the start of this five-year term", he believes: "will things be a little different, with regard to the less hegemonic political configuration for the majority, in which case (this left wing) will manage to obtain results?Or are we in something that is more a matter of strategies or internal competitions, but which will only have a very limited scope? "

Start of response at the start of the school year, with a new photograph of the lines of cleavage within the majority.