The recipes from the contest for children 'Pequechef Del EVOO' are collected in a book.

The Olivar y Aceite Interpretation Center compiled in a book recipes from the winning dishes of the 'Pequechef des EVOO' Children's Cooking Contest. 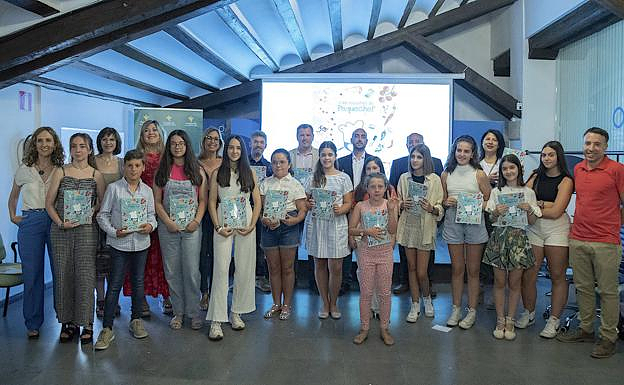 The Olivar y Aceite Interpretation Center compiled in a book recipes from the winning dishes of the 'Pequechef des EVOO' Children's Cooking Contest. This contest is held every year within the framework the Agricultural Machinery Fair, which is organized annually by the City Council of Ubeda. The final product was presented at an event which brought together sponsors, organizers and participants. Manager of the center, Soledad Roman, said that it was a project in the which they have put a lot love, enthusiasm, and dedication.

Pequechef's Recipes contains 23 recipes for children to learn how to cook healthy meals. It creates a collection of delicious, simple and healthy recipes that are easily accessible to the youngest members of the family. It encourages children to be involved in the kitchen and promotes a healthy diet. Roman said that it serves as a "basic manual on olive oil culture, to foster culture and knowledge among children and their families."

Javier Gamez (President of Olivar y Aceite, and Councilor for Agriculture) stated that they had been working for a while so that food lovers can find the recipes that some of the finalists in the last five editions "Pequechef Del AOVE" culinary contest. He added, "A work done by the smallest, which we feel particularly proud of, since the Interpretation Center works to promote and disseminate the culture of extra-virgin olive oil. It is vital that this work be carried out amongst the smallest."

Gamez reminded that registration is now open for the sixth edition "Pequechef Del EVOO" Children's Cooking Contest. The final will be held within the context of the 40th edition Agricultural Machinery Fair on September 17, in the multipurpose warehouse at the fairgrounds.

Pedro Bruno, deputy for Agriculture, Livestock, Environment and Climate Change, was happy to be present at the presentation. "This is just one of many activities that Olivar y Aceite has been carrying out with the children, to instill in them the culture of olive groves and oil," he said.

Some of the winners and finalists of 'Pequechef Del EVOO' were present at the event, which was held since 2017. The winners' recipes are included in the book, including red tuna tartare and Marta's EVOO pearls Romera (winner 2017), red mullet sashimi with Ana Rascon's extra virgin olive oil juice (winner 2020) and land and sea zucchini spaghetti (winner 2021).

The presentation concluded with the projection and distribution of a video that gathered the five years of contest results.

‹ ›
Keywords:
LibroRecogeRecetasConcursoInfantilPequechefAove
Your comment has been forwarded to the administrator for approval.×
Warning! Will constitute a criminal offense, illegal, threatening, offensive, insulting and swearing, derogatory, defamatory, vulgar, pornographic, indecent, personality rights, damaging or similar nature in the nature of all kinds of financial content, legal, criminal and administrative responsibility for the content of the sender member / members are belong.
Related News