The Radschnellweg Ruhr does not work as it should

This is the end of the last section of the Ruhr cycle expressway, which was only released in July. 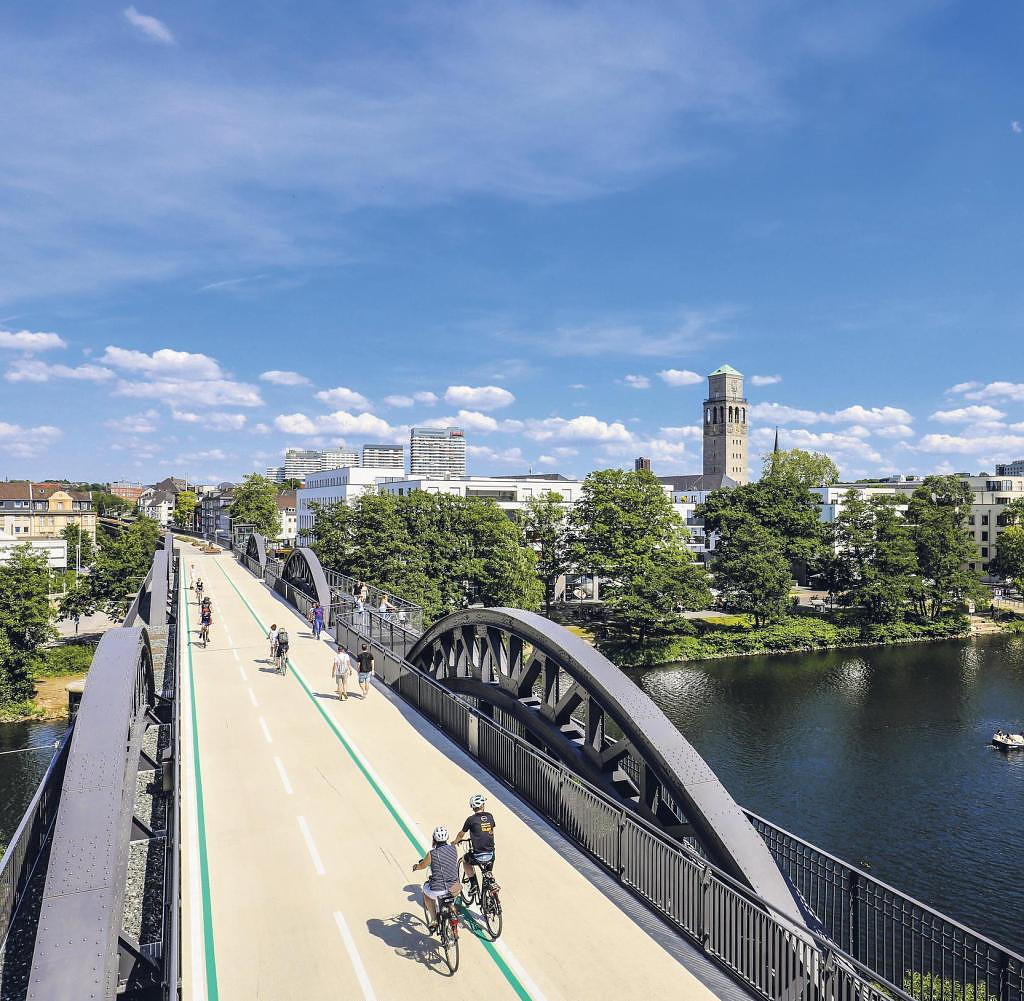 This is the end of the last section of the Ruhr cycle expressway, which was only released in July. Almost 700 meters long, it connects Bessemerstrasse with Windhausstrasse in Bochum. The structure consists of two paved lanes for cyclists and a pedestrian path. Lanterns are waiting to light the way for cyclists at night. The size of everything is reminiscent of the practice areas where children used to use kettcars to learn how to behave in traffic under the supervision of police officers.

Dirk Ernesti from Bochum is enthusiastic about the idea of ​​the Ruhr cycle expressway. He leaned his bike against a sign on Bessemer Strasse. "A cycle path that runs through the entire Ruhr area is a good thing. Many would use it to get from one city to another,” he says. With e-bikes, that would also be faster today than it used to be. In addition to a historic Opel, Ernesti himself also owns an everyday car, but he uses it less and less: "Whether I drive to work or to go shopping: the bike is usually faster and often more comfortable," says the 62-year-old employee at Bochum University. There, more and more colleagues got on their bikes. "And I'm sure more would do that if the connections were better."

The history of the Ruhr cycle expressway began with a great deal of euphoria: in 2010, when the Ruhr area was the European Capital of Culture, the idea of ​​building a “radautobahn” was born. It should connect the big cities in the center of the district and enable cycling in a new dimension for Germany.

There were already successful examples of such a project back then: more than 300 kilometers of “bicycle highways” had been built in the Netherlands since the 1980s. They were already in Belgium and even in the USA, the car country par excellence. The idea was well received by both politicians and the people in the district.

The Ruhr Regional Association (RVR), the merger of the towns and districts in the district, commissioned a feasibility study that was completed in 2014. Two years earlier, Martin Tönnes (Greens), head of the RVR planning department at the time, was convinced of the project's success in an interview: "The Ruhr area could play a pioneering role in Germany with the Ruhr Expressway and open up new avenues in the mobility discussion," he said. Tönnes even saw the growing importance of e-bikes: "A cycle highway could help establish e-bikes in commuter traffic."

Also with Karola Geiß-Netthöfel, head of the RVR, the euphoria knew no bounds. She cheered in 2017 at the opening of a section of the Radschnellweg in Mülheim: "All the major cities in the world are currently looking to the Ruhr area to see how we are building this 100-kilometer-long Ruhr cycle highway." She is particularly pleased "that we are starting a positive and modern project to transport a new picture and an innovative image for the Ruhr area to the world". The people are behind the project, "and the entire Ruhr area can be proud of it".

If the metropolises of the world looked at the Ruhr area today, they would hardly be able to see a coherent cycle path, but only piecemeal. At the moment, the State Ministry of Transport informed WELT AM SONNTAG that only 15 of the actually planned 114 kilometers are passable in the cities of Mülheim an der Ruhr, Essen, Dortmund and Gelsenkirchen.

The furthest is in Mülheim and Essen: the model route between Mülheim train station and the Essen campus of the University of Duisburg-Essen was completed in 2015. However, it does not yet meet the standard of the Radschnellweg. The route was planned as a normal cycle path at the time. According to the state, the RVR is now working on a corresponding "upgrade".

An approximately three-kilometer stretch in Gelsenkirchen was released in the summer of 2021 after a good year and a half of construction. Also in the summer of 2021, a steel bridge built by the RVR was put into operation in Essen to close the gap between Krupp Park and the university for traffic. In Bochum, the city opened an approximately 700-meter-long section to the west of the city to traffic in October 2021. In December 2021, a section of around one kilometer in length was converted and completed as a cycle lane in Dortmund.

While the RVR has massively expanded other cycle paths on old railway lines across the area in recent years, things are not progressing quickly on the Ruhr Expressway. However, it is not planned as a cycle path, but as a country road. With all the associated hurdles such as environmental impact assessments and building law procedures, which take a lot of time. In addition, there is chaos in the areas of responsibility: Although the state authority roads.NRW is responsible, the planning was handed over to the cities. Sometimes the cities build it themselves, sometimes the regional association. And they all struggle with a lack of engineers. In Dortmund people are already talking about a "decade project" - which roughly means that you don't know when it will be completed. So far there is not even a binding route on which the cycle highway is to be built across the district. While the completion of the Ruhr cycle expressway is still in the stars, the state has started planning further cycle expressways outside the Ruhr area: Six are to be built in Westmünsterland, Ostwestfalen-Lippe, the Aachen region, between Neuss, Düsseldorf and Langenfeld and between Cologne and Frechen . There is also a cycle expressway in the middle of the Ruhr area.

It is unclear when they will be finished. This is a nuisance for the state government. The express cycle lanes are important to them as part of the traffic turnaround. The people in Düsseldorf are correspondingly dissatisfied. Transport Minister Oliver Krischer (Greens) said to WELT AM SONNTAG: "The seven cycle expressways are important building blocks of future and sustainable mobility." The fact that the realization is taking so long reveals the problems with the planning and construction of such measures. "We will therefore have to think about more modern structures overall and also examine a reorganization in this area in the ministry. One thing is clear: things cannot go on as before.”

‹ ›
Keywords:
GrüneReiseNordrheinWestfalenEssenDüsseldorfDortmundGelsenkirchenFahrradtourenFahrradwegeMülheimWestmünsterlandHochschule BochumRVRBessemerstraßeWindhausstraßeRadschnellwegRheinische BahnRadautobahn
Your comment has been forwarded to the administrator for approval.×
Warning! Will constitute a criminal offense, illegal, threatening, offensive, insulting and swearing, derogatory, defamatory, vulgar, pornographic, indecent, personality rights, damaging or similar nature in the nature of all kinds of financial content, legal, criminal and administrative responsibility for the content of the sender member / members are belong.
Related News