Jorge Sanchez Cabrera (PSOE) will be the candidate for Cullar Vega's mayor for the next municipal elections. 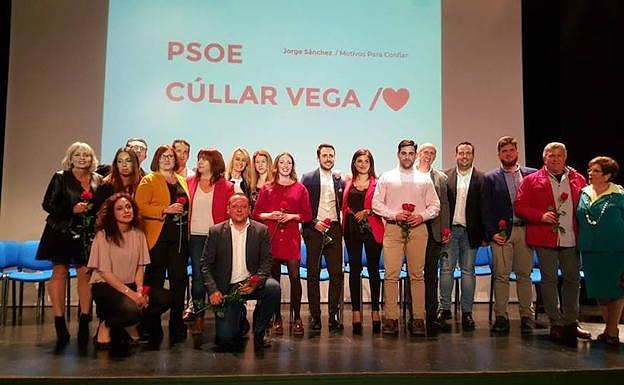 Jorge Sanchez Cabrera (PSOE) will be the candidate for Cullar Vega's mayor for the next municipal elections. He is currently the mayor.

More than 300 people have visited the House of Culture's theater. Socialists presented a "young and equal and balanced candidacy" that combines experience with renewal. There is also a clear commitment towards education since many of the candidates are either professors, teachers, or opponents in this field.

Jorge Sanchez outlined the pillars of PSOE's candidacy to seek support in municipal elections in May. He stated that "the management performed by the City Council during the last legislatures, work that the party is carrying out in Cullar Vega, and a program participative electoral process, which has collected hundreds and suggestions from neighbors," explained the Socialists.

The candidate stated that the PSOE had fulfilled more than 90% of its electoral program. He also highlighted that its current Government Team has "transformed Cullar Vega with new public spaces like the Plaza del Ayuntamiento and the Paseo de la Aurora and completed all educational cycles in the municipality with the expansion and start-up El Aljibe Nursery school>>.

Culleros' current mayor, Juan Jose Martin, the Andalusian Parliamentarian of the PSOE and Javier Aragon the Senate candidate, stated that the municipality has "become a benchmark in metropolitan Area because of its dynamism, its incessant activities: cultural agendas and sporting events, solidarity propositions and traditions>>.

Sanchez believed that Cullar Vega's PSOE "has always been on Cullar Vega's street, working tirelessly for its neighbors and coming to this process with all their homework done." If he is elected mayor, he will continue to work for Cullar Vega's success.

‹ ›
Keywords:
PSOECullarVegaPresentaCandidaturaEleccionesMunicipales
Your comment has been forwarded to the administrator for approval.×
Warning! Will constitute a criminal offense, illegal, threatening, offensive, insulting and swearing, derogatory, defamatory, vulgar, pornographic, indecent, personality rights, damaging or similar nature in the nature of all kinds of financial content, legal, criminal and administrative responsibility for the content of the sender member / members are belong.
Related News