If the city of Lyon is an exception by offering a roof to dozens of young people on the move, associations and elected officials are calling for the "presumption of minority" which would open rights to these migrants plunged into legal uncertainty while waiting for the establishment of their minor status. 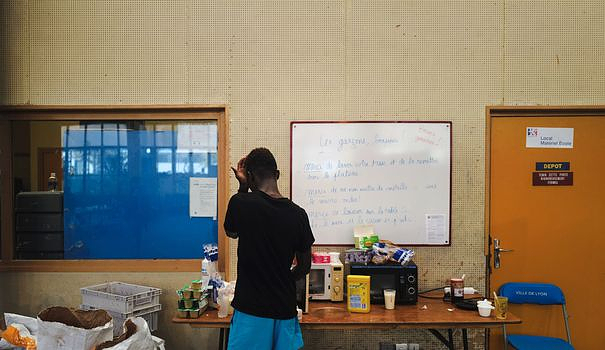 If the city of Lyon is an exception by offering a roof to dozens of young people on the move, associations and elected officials are calling for the "presumption of minority" which would open rights to these migrants plunged into legal uncertainty while waiting for the establishment of their minor status.

"Before coming here a week ago, I slept outside," Michel told AFP, a slender silhouette, his face marked by acne. This son of a teacher, a native of Yaoundé, says he is "16 and a half years old" and arrived "four-five months ago" in Lyon.

"I have just read messages from my father on my phone. He tells me to stay strong", says the young man, who has recently benefited from a camp bed like 65 other boys - all from sub-Saharan Africa - in a municipal gymnasium in the 8th arrondissement.

In small groups, the young people come and go in the building, transformed into a vast dormitory delimited by large screens.

The distribution of meals, laundry, registration in French classes and appointments with lawyers now punctuate their daily lives, with the help of several citizen groups and associations including LAHSo, which specializes in social inclusion.

"We are quiet. We are given food, we can take our shower", says Lamine, almost 17 years old according to him, who arrived last May from his native Guinea. Like Michel, he says little about his migratory journey.

Before the opening of the gymnasium at the end of September by the ecological municipality, the young man lived with dozens of companions in misfortune in squats and in tents in a park near the city center, with the support of residents and associations.

After a five-day social assessment conducted with the help of the Forum Réfugiés association, Lamine was not recognized as an unaccompanied minor (MNA). He is therefore not entitled to accommodation or care under the jurisdiction of the metropolis of Lyon, which holds part of the competences of the Rhône department.

Lamine is not considered to be an adult either by virtue of his appeal to the children's judge, which will be examined at best "in four months", according to the associations. He is therefore in a total legal fog.

"In fact, we have everything that the State and the Metropolis refer to each other", notes Sandrine Runel, PS deputy to the mayor of Lyon in charge of solidarity and social inclusion.

“We normally have no skills for sheltering these young people but we cannot let them sleep outside”, underlines the elected official who launched the “Zero child on the street” plan last winter. Lyons.

"Today, this gymnasium is a buffer, the time to be able to direct these young people towards specialized structures", greets Damien Delahaye, general manager of LAHSo.

For its part, the metropolis has nevertheless set up in 2020 the "Station", a reception center with 92 places intended for young migrants in recourse. But the place is fully occupied.

In addition to the occupants of the gymnasium, Ms. Runel indicates that the town hall has also made it possible to accommodate 37 other young people in the appeal phase, but she claims an obligation to support the State.

"We must ensure that there is a law requiring the State to take charge of these young people during the period of their appeal", underlines the deputy, who signed a petition to this effect with about forty parliamentarians. Nudes.

At present, there is no assessment of the number of young people in this situation in France. In the Rhône, half of them do not obtain the status of minor, even if 80% of those who bring legal proceedings obtain it, however, we specify in the Metropolis.

In its draft budget presented at the end of September, the government plans to finance 186,000 emergency accommodation places at the end of 2023, against 193,000 at the end of 2022. Last week, ten mayors of large cities in France were alarmed by this drop in a letter. to Prime Minister Elisabeth Borne.