The PP's victory is based on the harshness of Olona’s message and fear of a PP–VOX pact.

On Sunday, all eyes were focused on El Ejido municipality, not just from Almeria but also from across Spain. 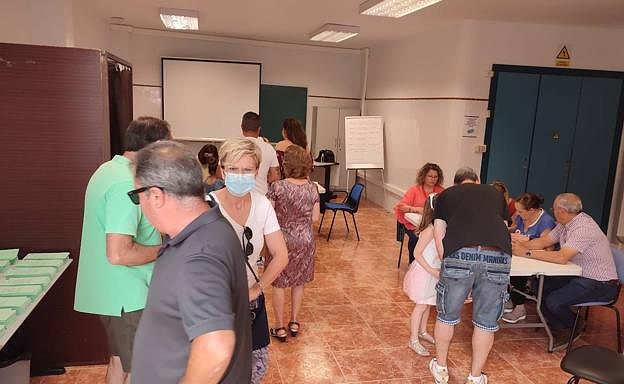 On Sunday, all eyes were focused on El Ejido municipality, not just from Almeria but also from across Spain.

This city of over 84,000 people was used as a thermometer to determine if the VOX message was getting through to its voters. It was also possible to see if it was possible increase the blow delivered by the ultra-right formation in previous Andalusian elections. Or if there was a decline in support for Santiago Abascal's formation. It was in 2018 that El Ejido took over the fortification of VOX. He won it, and was almost three points ahead than the PP.

The popular sentiment in El Ejido was positive on Sunday. The beginning of the electoral recount was what brought out the positive feelings and lowered them among others.

It was clear that Santiago Abascal's message did not generate more supporters in Ejido. Its results showed a 1.75 point decrease in votes received in the previous regional elections. 27.76% of the votes were cast on Sunday, as opposed to 29.51% four year ago. This is also considering the population growth in the four-year period in El Ejido.

VOX is still the second most powerful political force in opposition to a PP, which not only resurfaced but also increased its results by more than 20 percent four years ago.

The results also leave one more piece of information for Macarena Olona. It is the fact that El Ejido was the only municipality in Almeria that they failed to increase their support. This was not the case in Almeria capital Nijar or Roquetas de Mar. However, they were reduced.

So, if Saturday was a day for reflection on the election, Monday was the day for reflection and analysis about the reasons behind the results in El Ejido. The messages that were shared among voters and citizens were varied but they were recurring.

Despite the fact that VOX lost 262 votes, the overwhelming reason for those who voted to switch from Macarena Olona's formation to the PP was their aggressiveness during the campaign. They also sent messages to the Ejidense.

These elections weren't to vote for VOX. We were clear about that. Because we don't like the way they treat us, they leave me in a bad spot and many of their claims are false. It's true that there are many immigrants in this country. But they need to regulate them and not punish us again. They share their lives, the children go to school and the park. They are trying to prove that integration is impossible, which is a lie. Pepa Ruiz from Santa Maria del Aguila, a retired farmer, explained that my grandson has a friend named Josef. He doesn't understand racism but that he must share and play.

Soledad Ruiz, a VOX voter who voted in previous elections but decided to vote for the PP this time, says that "they cannot go with their aggressiveness in the electoral campaign." "We all need protection, whether it's in our health, in our company, or in our way of living. But that aggressive message is not good for us. El Ejido has suffered a lot of harm and we don’t want it to end," stated this neighbor.

VOX has many supporters in the agricultural sector. However, there are also people who have fled Santiago Abascal's party during this election.

I was already afraid of how they would use us to win votes. For us to be able work in the fields, we need immigrants. They also need us as they don't have enough food in their country. Jose Luis Rodriguez, a young farmer in El Ejido, says that even though VOX claims that illegal immigrants must be expelled, it's difficult. We need the help from governments to do this.

Others may have voted for them but regret it. "I voted again for VOX, but I was wrong." Paco Perez says that they have run a terrible campaign and that he is very happy that the PP won.

The votes that increased Sunday's PP numbers did not come only from people who voted against VOX. Everybody knows that the Cs vote went not only to the popular candidates, but also to votes cast by the PSOE. The reason this changed is the fear of a PP government with VOX by the socialist voter. They knew that only a majority of the PP could elude it. Many Moroccans can vote as PP punctual voters, Mohamed A. explains. He points out that despite voting for the PSOE in these elections, they knew they had to support PP.

"The Juanma-Moreno effect can be felt in Andalusia as well as El Ejido."

Although VOX did not make any statements regarding the results in El Ejido due to the fact that provincial assessments have yet to be made, they did speak from the popular ranks.

Francisco Gongora, El Ejido's mayor and President of Campaign Committee of PP of Almeria was cited in the first place for the reason that led to victory of PP. This effect has been observed throughout Andalusia, El Ejido and elsewhere for his spirit, his closeness, and his moderation as well as his work style and management.

Gongora also cites the PP campaign. "She was positive, respectful, and very sporty. She also listened to the street a lot."

Gongora explains that people will eventually realize that work and investment are worth it. That has been the case at City Hall for a year with VOX government.

The mayor emphasizes that the PP achieved the best results in Ejido and the province as a whole.

Gongora, on the other hand, acknowledges that "all the media at national level were focused upon El Ejido today (yesterday), in all the media there was El Ejido." They tried to set an example at the national level by creating a feud, but it didn't work out because they don't respect El Ejido. And this is what works: work, affection, and respect for El Ejido" and adds, "even though it's in an Andalusian Key, El Ejido is doing things well and are able to attract investment."

‹ ›
Keywords:
DurezaMensajeOlonaMiedoPactoPpvoxClavesVictoria
Your comment has been forwarded to the administrator for approval.×
Warning! Will constitute a criminal offense, illegal, threatening, offensive, insulting and swearing, derogatory, defamatory, vulgar, pornographic, indecent, personality rights, damaging or similar nature in the nature of all kinds of financial content, legal, criminal and administrative responsibility for the content of the sender member / members are belong.
Related News