"Hunger is not a game", says cacique Inacio Martins, of the Ava-Guarani people, who lives in the Mangaratu village, a piece of land where more than 200 indigenous families are crammed together, in the Brazilian state of Parana (south). 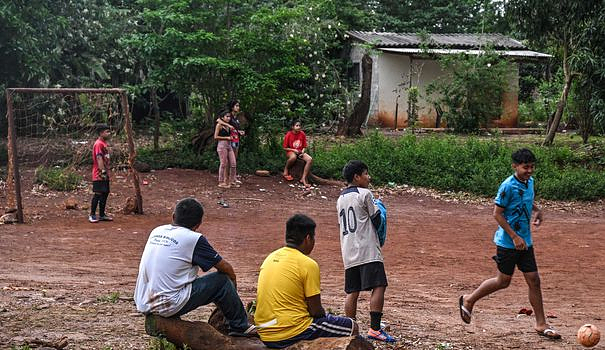 "Hunger is not a game", says cacique Inacio Martins, of the Ava-Guarani people, who lives in the Mangaratu village, a piece of land where more than 200 indigenous families are crammed together, in the Brazilian state of Parana (south).

Like many indigenous communities in Brazil, his village is sinking into hunger, unemployment and despair, the ancestral lands of his people not yet having the status of protected reserves.

The demarcation of indigenous lands in Brazil has been at a standstill since far-right President Jair Bolsonaro came to power in 2019: he promised not to cede "one more centimeter" to the peoples who inhabited his country long before the arrival of the Portuguese colonizers in the 16th century.

"We need arable land. We know how to cultivate the land, but here there are only stones," laments the 51-year-old cacique, pointing to the dusty ground around the hovels where the inhabitants of his village live. .

The noose has only tightened on the Ava-Guarani over time: the landowners of the region offer them less and less work on their farms and the latest arrival of food from the public body Fondation of the Indian (Funai) goes back three months.

"Before, when the whites arrived, we fled in the opposite direction, but now we have nowhere to go", insists the cacique, whose village is wedged between the Brazilian city of Guaira and the Parana river, which marks the border with Paraguay.

Daniela Acosta, 27, is one of the few Ava-Guarani women to have landed a job in a chicken meat processing plant, 65 km from the village. She goes there in a company bus which picks her up at 2:30 in the morning.

This mother of a child spends almost all of her salary in repaying a student loan for a course in pedagogy at a private faculty.

She has almost nothing left to buy food, but she is "ashamed" to beg in town, where the natives "are undesirable".

"No one comes here to see our reality. I hope that one day we will obtain the demarcation of our lands so that we can be self-sufficient", says the young woman, who has barely room for a bed and what cook in his modest home.

“The situation worsened when the Ava-Guarani began to formally claim their lands”, explains to AFP Marina Oliveira, of the Indigenous Missionary Council (Cimi), a Catholic NGO.

The natives are seen as a threat by local farmers, most of whom have inherited land that the government granted to their ancestors in the 1940s.

"We just want to get back what is rightfully ours. These lands are ours, we didn't sell them to white people," said cacique Martins.

Funai has already delimited a territory of 27,000 hectares supposed to become an indigenous reserve, based on documents attesting to the presence of members of the Ava-Guarani people from the 16th century.

But the reserve was never approved and the demarcation was canceled in court in 2020, a "totally atypical" decision, according to Marina Oliveira. Last June, the prosecution asked Funai to take the necessary legal measures to appeal this cancellation.

Inacio Martins says that in 2018, most of the inhabitants of his village had voted for Jair Bolsonaro, who is trying to be re-elected next Sunday against the left-wing ex-president Luiz Inacio Lula da Silva.

And despite the policy of "not a centimeter more" of the far-right president, the cacique, disillusioned, still says he is "undecided" as the second round approaches, on October 30. As if he no longer hoped for anything from the government, whatever its political color.

"My stepfather died at over 100 years old and he did not obtain the demarcation. I am soon 60 and I will surely experience the same fate", he says, disillusioned.

According to the NGO Socio-Environmental Institute, 237 of the 725 indigenous lands recognized in Brazil have not yet been approved.