The Plenary has given green light for the transfer of a large, 10,000-meter plot to be used for future barracks

Vicar continues to make efforts to establish a large headquarters within its municipality to provide service to the area. 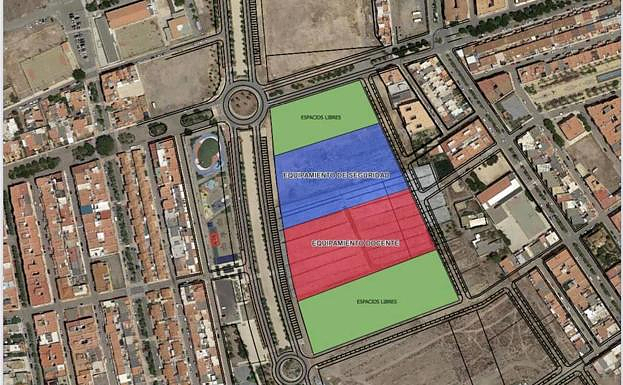 Vicar continues to make efforts to establish a large headquarters within its municipality to provide service to the area. After meeting with and visiting senior officials from the Ministry of the Interior this week, the Corporation's plenary approved the transfer of a large parcel of land (10,000 square meters) for the construction of a new barracks. The Government now has the plans.

Antonio Bonilla, the mayor of Vicar, has proposed the proposal. This historic decision will ensure greater security for Vicar's residents and vicars in the rest of the region.

The good location of this land was also mentioned by the first mayor. Also, the City Council will have the ability to provide the necessary facilities for the execution of project. This includes the preparation of the project. A budget of 50,000 Euros has been planned. The plot is located in Las Cabanuelas on the left-hand side of the Bulevar de La Paz. It is easily connected to the A-7's future junction, as well as the Variante de Roquetas y Vicar, and the coast.

Bonilla called the decision "historical and of particular importance in terms of how it affects the security municipality". He commented while celebrating the unity of the whole Vicariate Corporation. "We have all agreed that the transfer of land was vital to ensure the safety of Vicar and other municipalities of Poniente."

He stated that he was conscious of the need for a "greater police presence" due to increased population and development in the Poniente area. "The presence of the Civil Guard is essential, both for the rural population of the region as well as the urban population. There is growing concern about the increasing number of robberies in farms and warehouses, he added.

The City Council's decision is consistent with plans that have been in place for many years in the area. These included the construction of a National Police Station in Roquetas, and large barracks at Vicar from which the Civil Guard of Vicar would be centralized. La Mojonera, the rural and agricultural areas of Roquetas De Mar. Those plans were thwarted by the limitations of the crisis and the PP government’s commitment to a large Roquetas barracks. Vicar now wants to use the lack of definition which has marked the police policies in the area over the years to propose the rescue of the large barracks, for the Mayor Antonio Bonilla will give all the facilities the Ministry.

Other business of plenary

The plenary also approved, unanimously, the modification to the Anti-Fraud Measures Plan, in the framework of Recovery, Transformation and Residual Plan for the management City Council's European resources. It also authorized the designation of two new urban roads by the municipality, Calle Proa and Santa Isabel, which integrate the extension of the former in the same street.

The decision-making portion of the session was devoted to the motions of groups. There were seven in total, but only two were rejected. Izquierda Unida performed one for Pozo Navarro's lighting. Vox also approved one on urban transport proposals. This will be transferred to Transport Consortium.

The Popular Party presented two options, but only one was approved. It was abstained by Rafael Ruda, the non-attached Rafael Ruda and was defeated with the votes of the PSOE, Vox, and the abstentions from Vox. A new Organic Regulation of the Plenary was also rejected. Yes, the motion of Alfonso Santiago (non-attached) was approved for an increase of Local Police. Rafael Ruda was also approved for a monument to the Victims of Terrorism. Another request for better spending management was rejected. Before the recent celebration of a workshop about female sexuality.

‹ ›
Keywords:
VerdePlenoCesiónGranSolar10000MetrosFuturoCuartel
Your comment has been forwarded to the administrator for approval.×
Warning! Will constitute a criminal offense, illegal, threatening, offensive, insulting and swearing, derogatory, defamatory, vulgar, pornographic, indecent, personality rights, damaging or similar nature in the nature of all kinds of financial content, legal, criminal and administrative responsibility for the content of the sender member / members are belong.
Related News