These poultry, pig and duck breeders entered the building of the Directorate General for Food (DGAL) in the 15th arrondissement at the end of the morning. 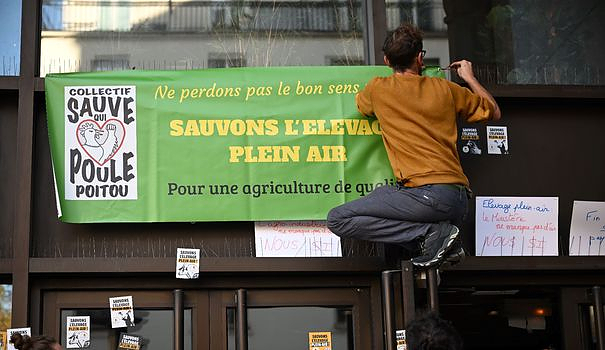 These poultry, pig and duck breeders entered the building of the Directorate General for Food (DGAL) in the 15th arrondissement at the end of the morning. Armed with flags in the colors of the third agricultural union, they calmly took over the hall, which they covered with hundreds of fake white feathers.

"No pigs in prison", "ducks in the pond", they chanted, lining the windows with stickers "Let's save outdoor farming", and settling down for a picnic based on "farm products ".

These breeders believe that the confinement measures decreed by the authorities to fight in particular against avian flu are useless for poultry raised outdoors, and "raise fears of the death of outdoor farming".

Some representatives of the Confédération paysanne immediately obtained an appointment with the general director of food, Maud Faipoux, still in progress around 2:00 p.m.

The union, which had dissociated itself from the government's roadmap this summer, has since been campaigning against "absurd regulations" and calling for adaptations to protect the farming method.

"If it's to do the outdoors indoors, I stop", defended Hubert Anquetil, who refused to cloister his 4,000 poultry last year in Vendée and "did not have a case" of flu.

The breeders refer the responsibility to the mode of industrial breeding, which according to them, causes an increase in the transport of animals and personnel, all in high-density sheds.

Last Wednesday, the Ministry of Agriculture called for the confinement of open-air poultry in Brittany and in the Pays de la Loire. The level of risk linked to avian flu had actually been raised from "negligible" to "moderate" at the beginning of October, forcing farmers to shelter poultry in risk areas.

Between autumn 2021 and spring 2022, more than 20 million poultry were slaughtered on farms, and the virus started to strike again in an exceptional way from the end of July.

Between August 1 and October 18, the ministry has already counted 25 breeding outbreaks resulting in the slaughter of 300,000 poultry, mainly in the west.