The paradox of Suriname and Guyana, oil eldorados with neutral or negative carbon balances

Oil could allow them to go from poverty to ecologically exemplary developed countries on condition that they avoid the "curse" of black gold, which has seen many producing countries squander fortunes without emerging from underdevelopment. 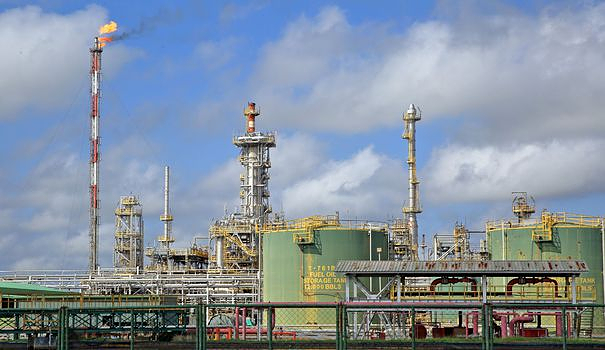 Oil could allow them to go from poverty to ecologically exemplary developed countries on condition that they avoid the "curse" of black gold, which has seen many producing countries squander fortunes without emerging from underdevelopment.

The numbers give the spin. Guyana has reserves of over 10 billion barrels with possible new discoveries.

Guyana (800,000 inhabitants) is already the country with the most reserves per capita in the world, even ahead of Brunei, Kuwait or the United Arab Emirates.

Even if the reserves have not yet been confirmed - the decision to exploit has still not been taken by the oil companies - Suriname (600,000 inhabitants) should follow closely, according to many experts.

Both countries are waiting for a shower of petrodollars.

"It's called Texas because it was a bit like the Wild West before. People carried guns, there were fights... There was no electricity, we used kerosene lanterns . Like the cowboys", says Edison Poekitie, 23, musician,

He lives on at most 50 US dollars a week. Is he sometimes hungry? "Not sometimes! Every day. You have to have grown up here to support it," he retorts.

The country is plunged into a serious economic crisis, with galloping inflation and an exploding foreign debt.

“We need pipes, electric cables, roads without holes, schools, houses, basketball courts, music studios …”, he continues before summarizing in rap: “No distraction on my way. Only destruction".

In Georgetown, the capital of Guyana, in the popular district of Annandale, Brian Braithwaite, 45, who runs a food stand is more "optimistic": "We live from day to day. Oil is good, but we don't feel the benefits yet. We are afraid that the money will be used for personal purposes. We must take the money to develop the country... People need work... If I don't see no progress, I'll leave," he concludes.

The interior of the two countries is even less developed than the coasts with landlocked villages often without electricity and minimal health services.

The presidents of the two countries promise to manage the windfall with rigor and emphasize that Sovereign Funds have been set up for future generations at the same time as mechanisms to control expenditure.

"We are aware of the curse of oil," said Surinamese President Chan Santokhi, assuring that the money will not be swallowed up in "the current crisis" but will also be used "for the future".

"The existence of oil is limited, we must use the income to diversify our economy, to invest in agriculture, tourism, housing, infrastructure. For sustainable development (...) for food security", he believes.

"We must use these revenues to build sectors that will give people opportunities."

The two Heads of State believe that this economic take-off can be achieved without affecting the carbon footprint, by relying on the vastness of their virgin forests (more than 90% of their territory) and thanks to an ecological transition financed by the oil money.

“Use dirty energy to finance clean energy”, sums up Timothy Tucker of the Georgetown Chamber of Commerce and Industry, who assures that the emissions generated by growth will be offset by the reduction in major polluting emissions.

Both countries are aiming for negative carbon balances to benefit from international funds. Irfaan Ali estimates carbon credits at 190 million dollars per year for Guyana.

But Monique Pool, a Surinamese figure in the defense of the environment in the sub-region, rightly believes that it would have been necessary to give up - like France in Guyana - to exploit this oil to devote herself solely to the quest for " carbon credits, a better path than oil".

“It will bring us money faster and for longer. Because it is sustainable. As long as we stay green we will have credits. Forever”.

"Offshore is a risk" in terms of pollution in this "virgin and high biodiversity" region, she adds.

In Georgetown, activist and lawyer Christopher Ram quips: "Right now it's Pompoms! Pompoms! Frivolities (like ecology) are not important."

Above all, he criticizes successive governments for having sold off the country's "sovereignty" by signing "bad and unbalanced" contracts in favor of the oil companies.

"The curse of oil seems inevitable (...) We have no economic policy and we need good governance".

In Paramaribo, the economist Steven Debipersad, from Anton de Kom University, underlines that the 10 billion dollars (revenue projection over 10-20 years) for a GDP of 3.5 billion will bring growth but there is will have an impact on the environment.

"It's not just the platforms to take into account, but growth, the resulting increase in population, car traffic, electricity consumption. It's going to be hard to keep the carbon footprint neutral. But it's is possible," he said.

Cynthia Neel, 53, an employee of a children's home, separated from her daughter when she was 6 to send her to study in the Netherlands: "If Suriname was going well, I would have kept her with me. I hope that with the oil the children won't have to leave."

His daughter Sheryva Winter, 29, who works in Rotterdam in logistics, believes: "If Suriname is better, I will think about returning".

Annand Jagesar, the CEO of Staatasolie, the Surinamese oil company, who studied in his country before completing his training in Maastricht, sweeps away the lesson givers: "When it suits, we change. Today in Europe, we are reopening coal plants so let us produce oil. We will do it while participating in the fight against global warming", he promises.