The trio of septuagenarians is rewarded for their discoveries on "quantum entanglement", a phenomenon where two quantum particles are perfectly correlated, whatever the distance which separates them, announced the Nobel jury. 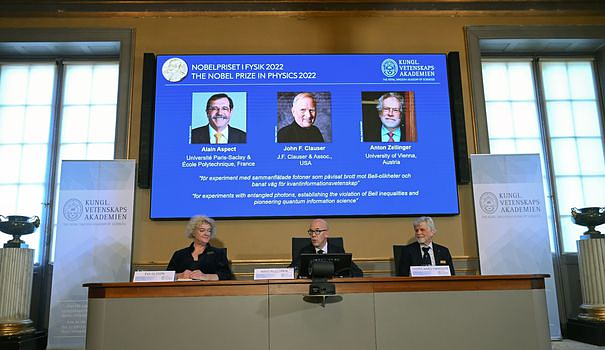 The trio of septuagenarians is rewarded for their discoveries on "quantum entanglement", a phenomenon where two quantum particles are perfectly correlated, whatever the distance which separates them, announced the Nobel jury.

The demonstration of this astonishing property has paved the way for new technologies in quantum computing and ultra-secure communications, or even ultra-sensitive quantum sensors that would allow extremely precise measurements, such as that of gravity in the atmosphere. 'space.

This puzzling mechanics was predicted by quantum theory. However, even Albert Einstein did not believe it: two particles joined at the start - like twins could be - could keep the mark of their common past and behave similarly, at a distance.

Affiliated with the French University of Paris-Saclay and Polytechnique, Alain Aspect is 75, while John Clauser, based in California, is 79 and Anton Zeilinger, from the University of Vienna, is 77.

"I was very surprised to receive the call," said the latter, joined by the jury during the prize announcement conference in Stockholm.

Despite the name "quantum teleportation" used for the mechanism of entanglement, "it's not like in Star Trek" with teleportation of objects or a fortiori of people, explained the scientist.

Quantum mechanics is a counterintuitive science that describes the world on the scale of the infinitely small, where things can simultaneously exist, not exist, and be somewhere in between.

Global economic giants like Google are currently mobilizing a large number of researchers to shape a next generation of so-called "quantum" computers.

They will look nothing like what we have in our pockets or on our desks, but their unparalleled computing power should solve problems that would otherwise be unsolvable.

Aspect, Clauser and Zeilinger, who together won the prestigious Wolf Prize in 2010, are being awarded for their "experiments with entangled photons, establishing violations of Bell's inequalities and paving the way to quantum computing," according to the official motivation of the Nobel jury.

In an experiment that has remained famous, Alain Aspect succeeded in entangling two photons for the first time at a distance of 12 meters in 1981.

Clauser's work dates back to the 1960s, while Zeilinger nurtured the field from the 90s, according to the Clarivate Institute specializing in the prediction of Nobel scientists.

The prize is endowed with 10 million Swedish crowns (approximately 920,000 euros) in each discipline, to be shared in the event of co-winners.

An award for quantum physics had been awaited for many years, with the names of the winners of the day among the favorites in the event of a crowning in this field.

The award was given last year to two experts in climate change modeling, the American-Japanese Syukuro Manabe and the German Klaus Hasselmann, as well as the Italian Giorgio Parisi, a specialist in complex physical systems.

On Monday, the Nobel Prize for Medicine or Physiology had crowned the Swede Svante Pääbo, discoverer of the DNA of Neanderthals and Denisova and founder of paleogenomics.

The Nobel Prizes in Science end on Wednesday with the Nobel Prize in Chemistry and then give way to the highly anticipated Literature Prizes on Thursday and Peace Prizes on Friday, the only ones to be awarded in Oslo.

The economy prize, a more recent creation, will close the ball next Monday.