The new youth of the Grand Rex, symbol of a capital of cinema that resists

On the Grands Boulevards, it's time for the last brushstrokes on the facade of the listed Art Deco building, modeled on the architecture of the early days of cinema in the United States. 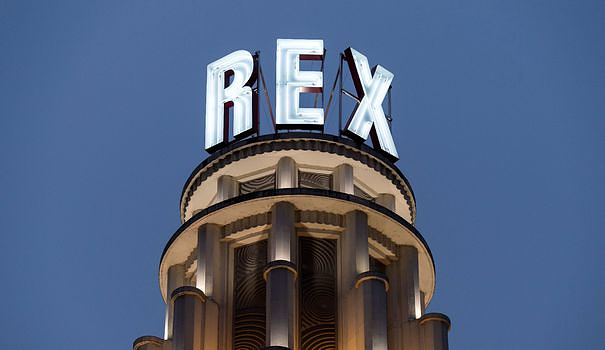 On the Grands Boulevards, it's time for the last brushstrokes on the facade of the listed Art Deco building, modeled on the architecture of the early days of cinema in the United States. The goal: to recapture the look of the 1930s, swapping the flashy red for the original cream and silver mix.

"Since the cinema has existed, we have counted 71 rooms larger than the Rex and its 2,700 seats. They have all closed", explains its manager, Alexandre Hellmann, impatient to press Thursday, for the inauguration, on the button which will relight the imposing rotating sign "Rex", which will once again be the only one rotating in the sky of the capital.

Queues that sometimes form in the early morning, an expected decline of only 10% in 2022 compared to before Covid... The success of the independent juggernaut is enough to make you green with envy. many exhibitors around the world who fail to bring their audiences back.

Especially since it is located a quarter of an hour's walk from the 27 screens of the UGC Ciné Cité-Les Halles, one of the busiest multiplexes in the world.

"If we had to live only with the cinema, we would close the doors", agrees Mr. Hellmann, who has played the card of diversification to the full, with his club, his escape game and above all his concerts-event, of Madonna to Bob Dylan.

As far as cinema is concerned, the Grand Rex has convinced the public to get off their sofa with "event" screenings, manga previews or film marathons until the end of the night, which allow you to attach loyal fan communities. And for glamour, prestigious previews, including the next, that of the latest Spielberg, "The Fabelmans".

- Farewell to the Champs-Élysées -

The Salle des Grands-Boulevards, in the heart of the capital, is also benefiting from the decline of another historic place of cinema, the Champs-Élysées. The Marignan will soon lower the curtain there, after the George-V,

The famous avenue, surveyed by Belmondo and Jean Seberg in "A bout de souffle", was "THE cinema district in Paris, but is disappearing", in particular because of "a disproportionate cost of land", analyzes Michel Gomez, the M. Cinema of the town hall of Paris.

"It's hard to see cinemas close, but cinema in Paris is a living fabric", dependent on private actors, who follow the "sociological and geographical evolution of the city", he tempers.

Even if the fate of certain small independents, such as La Clef or Luminor, remains threatened by real estate speculation, the art and essay network, unique in the world, "resists" globally, underlines Mr. Gomez. This is the case of the famous halls of the Latin Quarter and their ultra-sharp or heritage offer.

Places that refer to the other side of the Atlantic, as confided to AFP, director Damien Chazelle ("La La Land"), passing through Paris where he did his education as a cinephile.

"As a high school student, I went to old cinemas in the Latin Quarter, to watch retrospectives, screenings of old films from Hollywood, France or Japan. The first time I saw Fritz Lang's Metropolis was here. It won't be forgotten!"

The center of gravity of cinema in Paris could still shift. In 2024, a mega-project entrusted to star architect Renzo Piano by Jérôme Seydoux, boss of Pathé, is due to open near the Opera. And on a completely different scale, La Pagode will reopen, a high place in the history of cinephilia, bought by an American patron.