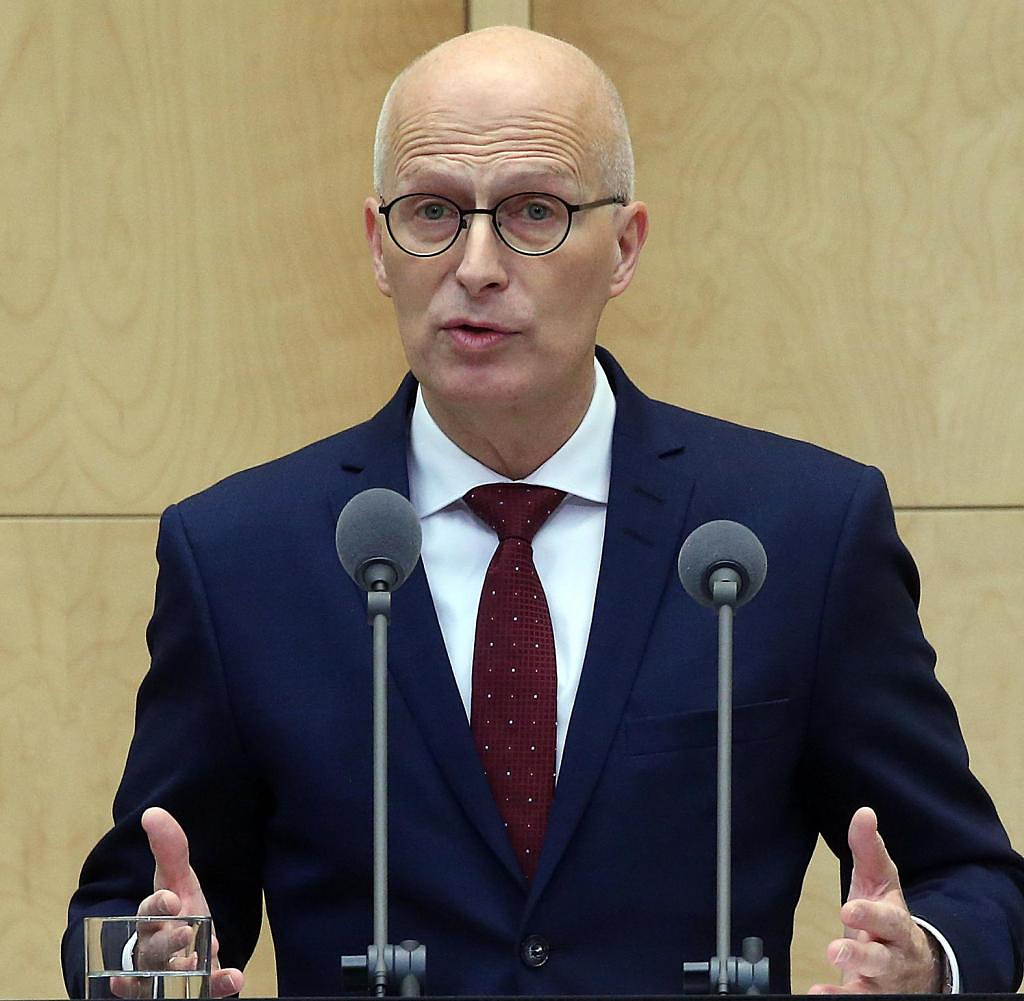 It is 9.36 a.m. when Mayor Peter Tschentscher steps up to the lectern of the Federal Council. He wears a red tie with a dark blue suit, matching the colors of Hamburg and the SPD. The speech was originally supposed to be his first major appearance after taking office as President of the Federal Council, but day-to-day business didn't allow for that.

The votes on the gas price brake and the dispute over citizen income pushed Tschentscher into the new role and responsibility of the office as early as mid-November. These are turbulent times, said the 56-year-old and added – as laconically as the people of Hamburg know him: “Sometimes decisions have to be made very quickly.”

In his inaugural speech on Friday, Tschentscher is primarily concerned with the challenges facing Germany and the world. The Russian President's aggression is shaking the European security order and calls for "quick decisions to take in refugees, to secure the energy supply and to avert damage caused by skyrocketing energy prices," stressed the Social Democrat in his twelve-minute speech.

He tries to fill the content of the motto "Open horizons" chosen for his presidency. Progress and change need "strength and motivation," and that "also has something to do with psychology and a positive mindset," he says. According to the First Mayor, the Hanseatic City of Hamburg stands for all of this.

The basis "for economic development, for growth and prosperity, for a good life for all citizens" has always been the willingness "to keep up with the times, to always break new ground". This is particularly important in times of crisis and upheaval. And bringing this mentality into the work of the Bundesrat is the contribution that Hamburg is making in the year of its presidency.

Tschentscher is the sixth mayor of the Elbe metropolis to take over the office of President of the Federal Council. It all started with Kurt Sieveking (CDU) in the mid-1950s. The SPD politicians Herbert Weichmann (1968/69), Hans-Ulrich Klose (1979/80) and Henning Voscherau (1990/91) followed, before Ole von Beust (CDU) held the presidency of the Federal Council in 2007.

Von Beust was particularly committed to ensuring that cooperation between the federal and state governments worked together. There was no room in the Bundesrat for party political games, he warned at the time.

This is where Tschentscher starts in his speech to the state chamber on Friday. Plenary debates are rarely the stuff of hot spots and headlines, but it's always worth listening. A "beneficial objectivity" determines the discourse, which sets it apart "from the increasingly confrontational discussion in public and social networks". "We should continue to cultivate this style," appealed Tschentscher, "as a counter-movement to the trend towards excitement and escalation."

This style is basically his style. His leadership, which is mostly based on facts, could help him in the office of President of the Bundesrat, even if he does not always meet with goodwill in Hamburg. According to the red-green Senate, some cannot deal with his penetratingly precise work and constant questions. Because Tschentscher tries to penetrate every topic down to the last detail, to dissect every problem, because he sees everything else as a sign of incompetence.

He is currently not said to have any federal political ambitions, not even because of his new role as President of the Federal Council. Tschentscher simply wants to help set the course for the federal government from the Elbe metropolis. It is also said from those close to the 56-year-old that Tschentscher would like to use his role as President of the Federal Council to emphasize the role of large cities and their potential.

In addition, comrades emphasize, the structures in Hamburg are much more closely linked due to the dual function as state and municipality, whether in politics, administration or science. Similar problems nationwide, for example in climate, energy and skilled labor issues, would become apparent more quickly in the city-state than in a rural area.

Hamburg is sometimes understood as "Bavaria of the North", as a functioning metropolis, according to the Senate, in which experience has shown that the opposition in the citizenry intervenes, for example on issues such as transport and infrastructure or the equipment of the courts and public prosecutor's office.

However, a current conflict within the Senate, in which the debate about the siltation of the Elbe is coming to a head, seems to be even more explosive. "The ninth fairway adjustment has finally failed," said the Greens parliamentary group leader in the citizenship, Dominik Lorenzen, these days. Now it is high time for a "sludge summit" at which "everybody is looking for a way out of this crisis and finding sensible solutions for large-scale shipping in the north."

In assessing the Elbe deepening, the Greens are clearly distancing themselves from their alliance partner, the SPD, who promptly countered in the form of parliamentary group leader Dirk Kienscherf: “The concept of adjusting the fairway has not failed, the federal government has not fulfilled its tasks more difficult.” This is “an absolute negligent handling". According to Kienscherf, Hamburg expects the federal government to finally carry out its tasks.

It will be a balancing act for Tschentscher to keep the coalition in Hamburg together in conflicts like this and to moderate the interests of the Bundesrat in the structure of the constitutional bodies. From a purely institutional point of view, however, not too much should be expected of him in his new role.

In any case, the sphere of influence of the President of the Bundesrat, who is elected by the Chamber of States from among the 16 Prime Ministers in a fixed order every year in November, is limited. The rotation always begins with the head of government of the most populous country. The tasks of the President of the Federal Council are less political and more representative.

And last but not least, according to Article 57 of the Basic Law, the President of the Bundesrat represents the Federal President if the latter is prevented from holding office or resigns prematurely. In terms of protocol, Tschentscher is fourth in the state after the Federal President, the Bundestag President and the Federal Chancellor, although there is no binding definition of the ranking of the constitutional organs in the Federal Republic.

It follows from this function, which is important in terms of protocol, that the President of the Federal Council and thus now Tschentscher does not speak for all federal states politically and in terms of content, especially not in difficult negotiations between the federal states and the federal government, such as this week on citizen income. The President of the Federal Council does not act as a kind of mediator, as there is a mediation committee in disputes.

Tschentscher is not in the chair there in his new role, but since Wednesday Mecklenburg-Western Pomerania's Prime Minister Manuela Schwesig (SPD) for the federal states and Lower Saxony's Bundestag member Hendrik Hoppenstedt (CDU).

In addition, the President of the Bundesrat differentiates himself in his office from the Chairman of the Prime Ministers' Conference, which is tailored to the heads of government. Tschentscher took on this function from 2018 to 2019 and attracted nationwide attention in the course of the pandemic when he informed the public about the corona rules alongside his successor Markus Söder (CSU) and Chancellor Angela Merkel (CDU). A role that the laboratory physician gladly accepted in order to strengthen the influence of science on politics.

It will be a challenging year for the President of the Federal Council, Peter Tschentscher is aware of this and, in addition to the Ukraine war and the effects of the pandemic, on Friday he described climate protection and digitization as a "Herculean task that demands a lot from us".

"We don't have much to lose," says the native of Bremen, the bad mood comes by itself. "As government officials, we have to counteract this with something positive." : It's about "courage and confidence that we in Germany, as the fourth largest economy in the world, that we can manage and even lead the major transformation processes with our economic strength, with scientific and technological excellence."

‹ ›
Keywords:
WernerJanaWittegenanntVedderJuliaBundesratBundesratspräsidentenTschentscherPeterBundesratspräsidiumRamelowBodo
Your comment has been forwarded to the administrator for approval.×
Warning! Will constitute a criminal offense, illegal, threatening, offensive, insulting and swearing, derogatory, defamatory, vulgar, pornographic, indecent, personality rights, damaging or similar nature in the nature of all kinds of financial content, legal, criminal and administrative responsibility for the content of the sender member / members are belong.
Related News