The Mother Brotherhood is greeted by the rocieros from Baza and their godmother, the Gelves

Yesterday afternoon, the Brotherhood of Rocio de Baza presented itself to the Mother Brotherhood. 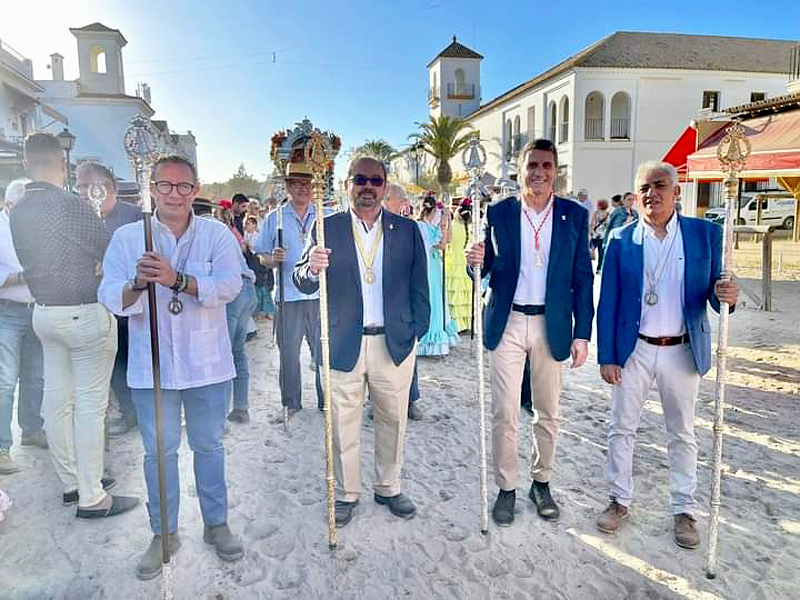 Yesterday's 30 Bastetan pilgrims made the journey this year, and were joined by dozens of Baza rocieros, who traveled to Baza in the chartered bus to accompany the Bastetan brotherhood.

Bastetano pilgrims are very grateful for the warm welcome from the Brotherhood of El Rocio de Gelves, who have shared their path which was not always easy. This included sections that were difficult for strollers, some of whom were stuck in the sands, and it was very difficult to get out.

After traveling 90 km, Gelves and Baza pilgrims arrived in the village Friday afternoon. They had passed through Pinares de Aznalcazar, Villamanrique de la Condesa, or the Vado del Rio Quema. This route is one of the most beautiful that brotherhoods use before they take the Raya Real to Rio Ajoli bridge.

The Holy Mass of Pentecost is attended by the Brotherhood Godmother of Gelves as well as the Brotherhood of Baza. This morning, banners from the 125 branches of the rociera family will be displayed. Santiago Gomez Sierra (Bishop of Huelva) preside over the celebration, with the brotherhood chaplains serving as concelebrants. A Mass of Romeros with the musical participation of Mother Brotherhood of Almonte.

‹ ›
Keywords:
RocierosBazaPresentanAnteHermandadMatrizJuntoMadrinaGelves
Your comment has been forwarded to the administrator for approval.×
Warning! Will constitute a criminal offense, illegal, threatening, offensive, insulting and swearing, derogatory, defamatory, vulgar, pornographic, indecent, personality rights, damaging or similar nature in the nature of all kinds of financial content, legal, criminal and administrative responsibility for the content of the sender member / members are belong.
Related News