The man with the balls from Fire 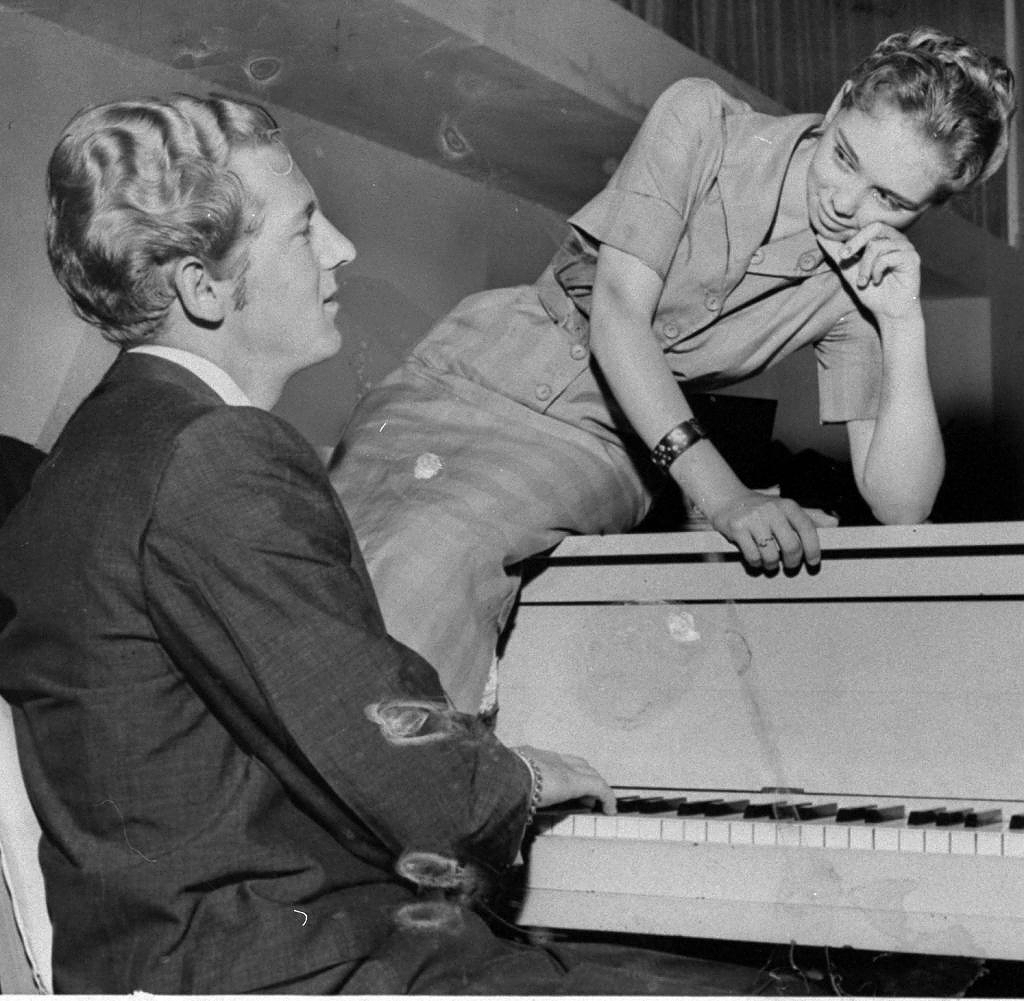 Reprinted in Greil Marcus' book Mystery Train is an amazing dialogue between Jerry Lee Lewis and Sam Phillips, founder of the Sun record label. They were in the studio in October 1957 and were about to record the single "Great Balls of Fire" as a follow-up to the hit "Whole Lotta Shakin' Going On". The great fireballs are a religious vision of the end of the world. But of course "balls" also have a sexual meaning - especially when they are sung about with the fervor of early Jerry Lee Lewis.

Now Jerry fears he's going to hell. And Philipps, who, in addition to Lewis, also made stars of Elvis Presley, Carl Perkins, Johnny Cash and Howlin Wolf in his studio. wants to convince him that it's not all that bad. Their discussion of the nature of sin was incidentally recorded and later pressed onto vinyl records.

Lewis ended up recording the song, and it was so fervent that a standard work on eroticism in rock lyrics was named after it. Jerry Lee Lewis, who died on Friday at the age of 87, could in all innocence be both: seducer and saint. He was kicked out of the seminary, called himself the "killer", brandished pistols in concert, set his piano on fire with petrol and, in the end, a heavy drinker, which he was for a long time, he was able to take everything back, lovingly singing ironically: "It was the whisky talking, not me". At most, Little Richard was crazier than he was.

But Lewis always remained pious. When it became known in 1958 that he had married his 13-year-old cousin (this was his third marriage!), it wasn't provocative decadence, but ordinary Southern backwoods incest. In Ferryday, Louisiana, where Lewis was born September 29, 1935, began playing the piano at nine, and hung out at the local honkytonk to eavesdrop on adult musicians, such an early marriage didn't seem unusual.

Still, it ruined Lewis' career. His only major success in the years that followed was the album Live at the Star Club, Hamburg, which he recorded with German producer Siggi Loch, and which is now considered one of the best live albums of all time.

It wasn't until the late 1960s that Lewis returned permanently to the limelight as a country singer. He remarried four more times, lost two sons and two wives to accidents or overdoses, shot around outside Elvis' mansion and accidentally shot his bassist. At some point, the musician disappeared behind the headlines. And so it was overlooked that his last real studio record "Young Blood" in 1995 was fantastic.

Now Jerry Lee Lewis died two years after Little Richard. He had been wrongly pronounced dead the day before. He was the last survivor of the group of musicians who, in the 1950s, amalgamated black and white popular music into the most important cultural innovation of the 20th century: rock 'n' roll, which, unlike so many other artistic movements that wanted to but didn't make it, actually changed the world. Empires of money and sex have been built on this foundation, and empires of politics have fallen like Jericho to these sounds.

When he died, his seventh wife, Judith, was sitting by his bedside, his publicist Zach Farnum told Variety. It was at his home in Desoto County, Mississippi, just south of Memphis. "He told his wife on his last day that he was looking forward to the afterlife and was not afraid of it."

The relationship to hell, which he was still so afraid of as a 21-year-old, had apparently relaxed a bit over the course of his life: "I'm dragging the audience down to hell with me" was the Lewis aphorism that the journalist Nick Toshes at the beginning of his book Hellfire.

Celebrating the object of his performance, Toshes said, “Believe it or not, Jerry Lee Lewis is a creature of mythical substance. He was and is the heart of redneck rock 'n' roll and one of the greatest singers who ever lived. He is the last American wild man.”

Lewis himself wasn't one to hide his light under a bushel either. He happily repeated his credo that there were only four true stylists in American music: Al Jolson, with whom the first sound film "The Jazz Singer" was shot, the country myths Jimmie Rogers and Hank Williams - and of course himself.

The "Trouble" - the German "anger" is the complex, also psychological and revolutionary meaning that the word has in English, only insufficiently - he left behind on his deathbed. But for many decades, the taste for "Trouble" was Lewis' characteristic: "Trouble in Mind" is the name of the documentary about his life, which none other than Ethan Coen shot about him in 2020.

‹ ›
Keywords:
RocknRollHeineMatthiasLewisJerry Lee (Sänger)
Your comment has been forwarded to the administrator for approval.×
Warning! Will constitute a criminal offense, illegal, threatening, offensive, insulting and swearing, derogatory, defamatory, vulgar, pornographic, indecent, personality rights, damaging or similar nature in the nature of all kinds of financial content, legal, criminal and administrative responsibility for the content of the sender member / members are belong.
Related News