The former fence between protesters, the White House at Lafayette Park in the summer 2020 (also known to be the Black Lives Matter Memorial), featured hundreds of posters, artwork and signs left by protestors following George Floyd's murder. 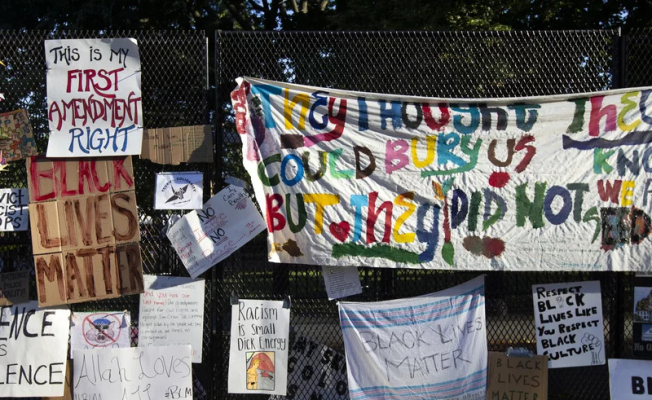 The fence was taken down by authorities in 2021. However, activists set out to preserve all artifacts -- each sign representing a piece of our nation's past.

The pieces of artwork that were once a part of the movement's memorial are now being displayed thanks to activists and archivists in an online exhibit at the Library of Congress.

The Library says that more than 30 pieces are now online.

"[The Library] wants people see those signs, the message and contextualize them with others parts of our collection that discuss similar issues," stated AlizaLeventhal Head of technical services for prints and photography division of Library of Congress.

The collection was made possible by activists and archivists working together

Leventhal was the Library's curator of artwork and signs. She worked with Nadine Seiler, the fence's de-facto curator, and other people to bring the digital collection to life.

Leventhal claims that she visited the fence every day for eight months and became fascinated by what she saw.

She stated that "every day new signs were appearing, another person sharing there story and adding valuable layers on the ongoing conversation on fence."

Leventhal started to record the experience, keeping track of emotions and the experiences that were brought about by the display as the artwork covered the fence.

Leventhal stated that the signs included crafted art made at home or on-site, as well scrap paper with hastily written messages.

Volunteers took down over 800 pieces of artwork, signs, and banners as the fence was being taken down. Each one will be preserved in the hope of being archived.

Activists spent many months monitoring the fence and its artwork.

After Floyd's May 2020 murder, protesters gathered in Lafayette Park near the White House. Federal authorities quickly set up steel barricades around various entrances to the park. The fence was put up on June 4, 2020 and removed on January 30, 2021.

New York activist Karen Irwin and Seiler spent hours at the fence, now known as Black Lives Matter Plaza. They worked together to save hundreds of protesters' pieces.

Seiler stated, "Whether it was going rain, snow, or ice, there were people who lived at the fence." "There was someone on that fence or within a few meters of it, wherever the police pushed me."

Seiler and other guards kept watch over the fence. The artwork became a symbol of the movement and a place people stopped to take pictures. This was in honor of what the fence and its signs represented.

However, the drive to save the artwork was sparked by demonstrations that saw protesters tear down signs on the fence.

Seiler says that part of her felt disregarded because people would pass and vandalize the stuff. "I made sure that the stuff wouldn't be torn down."

Some signs were distributed throughout the country

Seiler set out to save as many signs as possible after volunteers took down the 800+ signs.

They are currently being stored in a Washington, D.C. storage unit while they wait to be scanned at Baltimore's Enoch Prt Free Library, which is a joint project with D.C. Public Library.

As part of the 100th anniversary Tulsa Race Massacre, a small number of signs were displayed in Tulsa, Okla. Last year. A few of them were also collected and donated by Howard University.

The story was published by NPR in October. It was followed by the National Civil Rights Museum located in Memphis, Tenn. and the George Floyd, Anti-Racist street art archive. They expressed interest in receiving artwork for exhibitions and archival purposes.

Seiler states that once all the 800-plus items have been scanned the gifting process will officially start for the artwork.

She says that organizers of the D.C. chapter Black Lives Matter would prefer the pieces to remain in the hands Black organizations. Seiler stated that regardless of where the pieces land, she hopes that people will recognize their value and the messages they carry.

Seiler stated, "I don’t know what it will take, but whoever takes some must agree to care for them."