The lay wedding officiant or the à la carte ceremony

In front of an arch decorated with heliconias and birds of paradise, a hundred guests attend this ceremony in the open air. 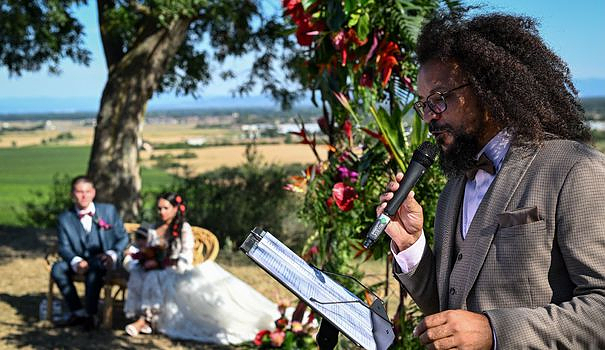 In front of an arch decorated with heliconias and birds of paradise, a hundred guests attend this ceremony in the open air.

“At the town hall, we talk about laws, rights and duties (…) now we are going to talk about love, feelings and emotions”, resumes David, retro three-piece brown checkered suit. chic and pink sneakers, facing the young couple, who chose an Alsatian-Polynesian theme, reflecting their mixed origins.

Tears and laughter are linked on the faces of the lovebirds and their loved ones, to the rhythm of the statements of the witnesses and the sometimes romantic, sometimes festive songs that David launches from his smartphone on this promontory dominated by the luxuriant Vosges.

"We wanted something original, which represents us", smiles the bride, Vaéa Haller. The 27-year-old beautician from New Caledonia says she "needs to control everything". "With a professional I can let go of everything," she adds, relieved, wedding ring on her finger.

During the celebration, the couple performed several rituals, to choose from about forty offered.

They mixed in a bottle three brown, pink, and blue sands, with their two-and-a-half-year-old daughter, Moana. A reference to their home, united "in an inseparable way", where each color represents everyone, with their "story" and their "personality".

In a box, the duo also left their wishes, a bottle of wine from the year they met that they will only open in five years or memories of the birth of their child.

Before making their exit to the universal "Happy" by Pharrell Williams, David asked the guests to throw balls of yarn at each other until they ran out and then hold them above their heads, all forming a multicolored cover, symbol of the bonds woven between families.

"These are things that we cannot necessarily do in the Church, where it is more solemn. There it was our sauce", agrees Joey Haller, 28, self-entrepreneur and happy husband, past the day before in front of the mayor.

To David, he and Vaéa told their story at length, the meaning of their commitment, and their wishes for the celebration, during several preparatory meetings, several months ago.

It is then up to the celebrant to write the story, from the meeting to the wedding. “You have to stage all of this and enhance it,” says this former Club Med DJ, with a keen sense of showmanship.

"The questionnaire gives me a framework and allows me to know where I can go and where I can't", sometimes with complicated family relationships or a painful past, explains David Bazile, 43, who writes all the speeches. It is then up to the couples to validate them, to entrust this task to a loved one, or to let themselves be surprised on D-Day, an option chosen by 80% of them.

David and his partner, Sandra Werneburg, - they are not married -, launched their wedding planning business 9 years ago, in La Wantzenau, north of Strasbourg.

After the photo, the decoration or the entertainment of the evening, the secular ceremony was added to their services in 2016. With growing success, to the point of having difficulty meeting demand. About fifty are already scheduled for 2022.

"It exploded," confirms photographer Cyrielle Beaugeois, who is delighted with these "American-style" celebrations, which are often very visual.

"Many couples do not go through the Church: either by choice, or because they have different religions, have already been married there, or because they are homosexual", also notes Sandra Werneburg who also leads some ceremonies. "Often, guests ask us if we've known the newlyweds for a long time", so detailed are the romances of each couple.

She and David have taken training from the Association of Marriage Consultants (Assocem) which is trying to structure this new profession and brings together 150 professionals. According to this organization, the service of an officiant is charged 1,000 euros on average to the spouses, for 30 to 50 hours of work, from the first meeting to the ceremony.

"The role of the officiant must be a little better known by the bride and groom, because many say that Uncle Jacques can also do things, while the ceremony remains a highlight of the day and should not be rushed. ", says the president of Assocem, Virginie Mention. His organization is now seeking to include the qualification of wedding officiant in the national repertoire of professional certification.