The landing of migrants completed, the Ocean Viking left Toulon

After 20 days at sea in search of a safe port, the 234 migrants rescued between the Libyan and Italian coasts by SOS Méditerranée were all able to be disembarked, 230 at the military port of Toulon on Friday and four in Corsica initially, before then be transferred to the mainland. 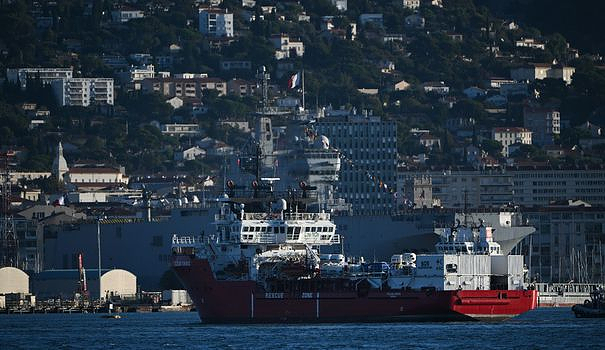 After 20 days at sea in search of a safe port, the 234 migrants rescued between the Libyan and Italian coasts by SOS Méditerranée were all able to be disembarked, 230 at the military port of Toulon on Friday and four in Corsica initially, before then be transferred to the mainland.

Among them, 189, including 23 women and 13 minors, are now in a holiday village on the Giens peninsula, in Hyères, transformed into a closed "international waiting area" created especially so that they are not considered to be in France and from which they are prohibited from leaving before an initial assessment of their asylum application.

For the moment, everyone has indicated their wish to make this request, according to the prefecture. Before that, they will have to go through security checks, in particular those of French internal intelligence, before interviews with the French Office for the Protection of Refugees and Stateless Persons (Ofpra) whose agents are expected on Saturday to check if their profiles are compatible.

First to be evacuated from the military port of Toulon because of his state of health on Friday morning, a 190th survivor was hospitalized.

The 44 unaccompanied minors on board the Ocean Viking, most of them "young adolescents", indicated the prefect of Var Evence Richard, were taken care of by French social services and relocated outside the Giens camp.

Two-thirds of the people, i.e. 175, will leave France to be relocated to eleven countries, including Germany, which is to take in around 80, Luxembourg, Bulgaria, Romania, Croatia, Lithuania, Malta, Portugal, Ireland, Finland and Norway.

This is the first time that an ambulance boat operating off the coast of Libya has landed survivors in France.

For SOS Méditerranée, this situation "must not happen again" and the NGO will go back to sea "because there have been more than 20,000 deaths since 2014 in the Mediterranean Sea and we do not accept that this sea becomes a cemetery".

Since the beginning of the year, 1,891 migrants have disappeared in the Mediterranean, trying to reach Europe, according to the International Organization for Migration (IOM).