The island of Ischia, an example of the scourge of illegal urbanization that is hitting Italy

The drama "of Ischia is an announced tragedy which has specific causes and responsibilities: an irresponsible management of the territory which, with the acceleration of the effects of climate change, has become a time bomb", denounced the Italian branch of the World Wide Fund for Nature (WWF) in the aftermath of the tragedy. 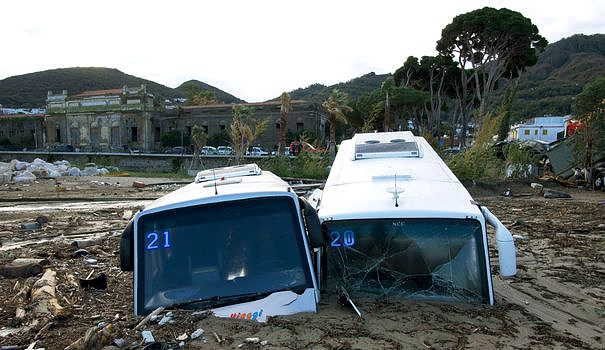 The drama "of Ischia is an announced tragedy which has specific causes and responsibilities: an irresponsible management of the territory which, with the acceleration of the effects of climate change, has become a time bomb", denounced the Italian branch of the World Wide Fund for Nature (WWF) in the aftermath of the tragedy.

"It's very hypocritical to mourn the victims now while continuing to build where we shouldn't," castigates the NGO.

According to experts, legal or illegal urbanization, combined with deforestation, prevents the soil from absorbing water from precipitation, as happened in Casamicciola Terme, a locality on the island where heavy rains soaked the land. overlooking the spa and resulted in the killer landslide.

Abusive constructions are a recurring subject of controversy on the other side of the Alps, the deadly natural disasters that frequently strike the peninsula being regularly associated with this scourge.

"The sad and widespread phenomenon of abusive constructions is, insofar as it is the cause, or one of the causes of disasters, a subject that can no longer be avoided," admitted the Minister of Civil Protection on Thursday. Nello Musumeci.

This is even more true in Ischia, an island of volcanic origin in the Bay of Naples whose soils are particularly unstable.

"49% of the territory of Ischia is classified as high or very high risk of landslides, with more than 13,000 people living in these areas," Environment Minister Gilberto Pichetto Fratin said on Wednesday.

Even more worrying figure: 93.9% of Italian municipalities are at risk of landslides, flooding or coastal erosion, according to the latest report from the Higher Institute for Environmental Protection and Research (ISPRA).

"You don't need to be a specialist to understand that illegal construction represents a risk multiplier that goes far beyond the people who live there", according to the WWF.

Faced with anarchic constructions, the solution most often chosen in Italy is amnesty. But the procedure is so long and complicated that it often takes several years to get a response from the administration.

In Ischia alone, 27,000 amnesty requests have been filed in recent years, according to the media.

And when the justice finally decides to demolish an abusive construction, its occupants often find ways to circumvent the decision.

The occupants of an illegal house "brought in the children of the whole family, in the broad sense, because the presence of minors justifies the dismissal of the destruction", he says.

Another technique used: the police when they arrive "find in the illegal rooms, the veranda or the dining room, patients connected to infusions as in a Swiss clinic".

For Sergio Piro, a 47-year-old hotelier who manages three establishments, including one in Casamicciola Terme, illegal construction is only part of the problem.

"It is true that there are illegal constructions, but in this specific case it is a section of mountain that has come off because there has been no preventive work, in particular maintenance of the canals of drainage," he notes.

"I heard a huge noise when this torrent of rocks and earth hit the first houses", tempers the hotelier, who wishes to point out that the rest of the island of Ischia, which lives mainly from tourism, works quite normally.