The Ibex leads the advances in Europe and reduces the weekly fall to 2.9%

The European stock markets have dismissed the session with a mixed sign after yesterday's crash on Wall Street and in a volatile day due to the 'quadruple witching hour'. 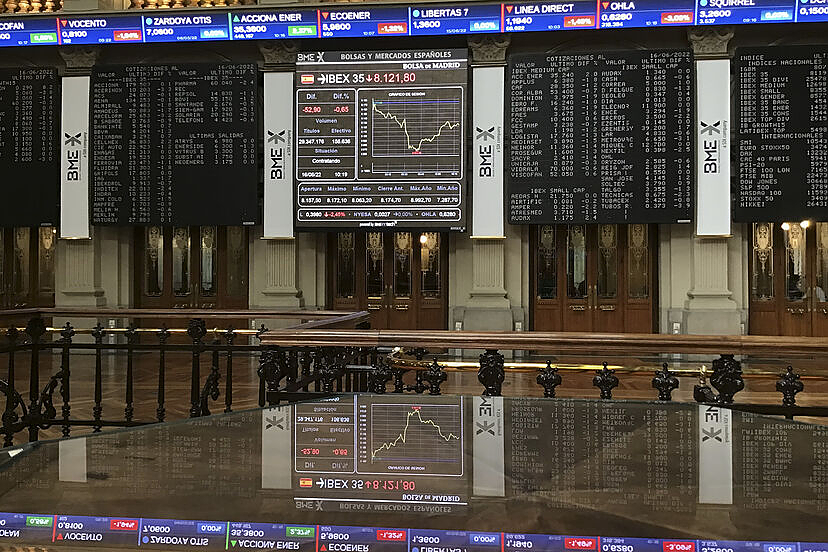 The European stock markets have dismissed the session with a mixed sign after yesterday's crash on Wall Street and in a volatile day due to the 'quadruple witching hour'. The Ibex has led the increases with a rebound of 0.88% to 8,145.90 points. In the week as a whole, marked by the actions of the central banks, the Spanish selective has lost 2.9%.

The European stock markets have dismissed the last session of the week with a mixed sign and marked by the 'quadruple witching hour'. On the third Friday of the last month of each quarter (March, June, September and December) the derivatives market takes on special prominence due to the simultaneous expiration of futures and options on stock indices and shares, which always adds turbulence and lurching to the day .

Thus, the markets have added greater volatility to the uncertainty generated by the actions of central banks, which have decided to speed up interest rate hikes to control inflation, unleashing fear of a recession.

The Bank of England and the Bank of Switzerland were yesterday the last central banks to raise rates to control inflation. On Wednesday, the US Federal Reserve raised rates by 0.75%, the biggest jump since 1994, after the new record reached by inflation in May (8.6%).

In addition, this week, the ECB called an emergency meeting due to the rise in risk premiums. The institution chaired by Christine Lagarde announced the launch of a new mechanism to relieve peripheral debt. Today the year-on-year inflation rate in the euro zone stood at 8.1% in May, compared to the 7.4% registered in April and March, the highest rise in prices in the region in the entire historical series and four times more pronounced than that registered a year before (2%). This data could lead the ECB to raise rates by 50 basis points at its next meeting.

The Ibex closed today at 8,145.90 points after an advance of 0.84%, at the head of Europe. In recent sessions, the Spanish selective has dropped 2.9%, which is its third week of falls.

The banks have come to the rescue of the selective. The sector is at a crossroads between rate hikes, which benefit it, and the depreciation of debt portfolios and fears of a recession, which harm it. Today there have been advances, led by Sabadell (5.68%). Bankinter has rebounded 5.06%; CaixaBank, 3.62% and BBVA, 2.41%. But the leading role in the sector today has been for Santander (2.30%). The entity has announced the appointment of Héctor Grisi, current chief executive of Santander Mexico and head of business in North America, as the group's new CEO, replacing José Antonio Álvarez. In addition, the American fund Dodge

In negative terrain, the 'utilities' have stood out, penalized by the recent rally in the profitability of the debt as a result of its indebtedness. Naturgy (-4.24%), Enagás (-2.94%) and Endesa (-1.55%) are among the most penalized values ​​of the session. Values ​​linked to raw materials, such as ArcelorMittal (-1.39%) and the oil company Repsol (-4.58%), have also returned to trading with cuts.

Bond yields, triggered by central banks' tightening of monetary policy, have taken a breather. The yield of the German bund falls to 1.65%, while that of the Spanish bond relaxes towards 2.75%. The risk premium drops to around 110 basis points. In the United States, on the other hand, the yield on the bond rebounds above 3.20%.

With central banks raising rates on both sides of the Atlantic, currency prices remain highly volatile. Today the dollar gains ground and the euro falls to 1.04 dollars, while the pound loses 1.22 dollars.

The price of gold has returned to its usual level of recent weeks, around 1,850 dollars. Bitcoin cannot break away from the $20,000 zone to where it fell in its crash.