The Ibex closes a turbulent year with losses of 5%

The Spanish Stock Market says goodbye to a fateful year in the markets with a negative balance, but which significantly improves the performance of the European markets as a whole. 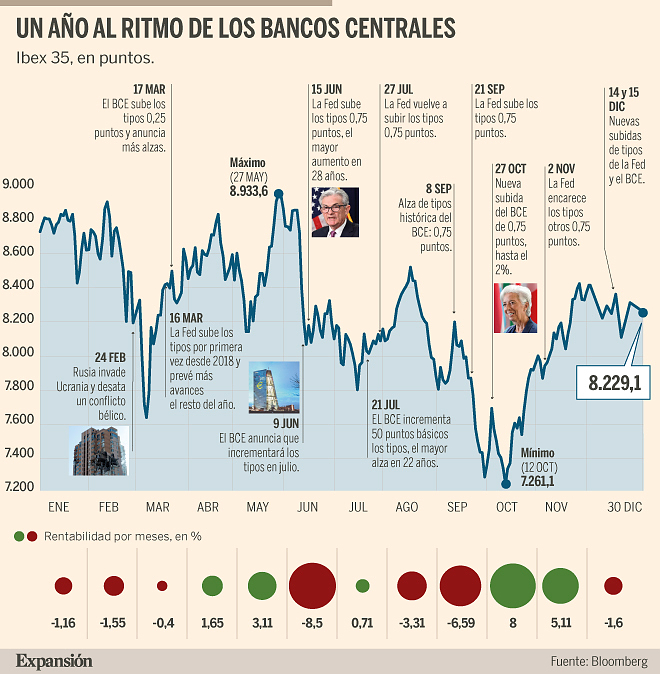 The Spanish Stock Market says goodbye to a fateful year in the markets with a negative balance, but which significantly improves the performance of the European markets as a whole. The Ibex manages to halve the losses of close to 10% prevailing in the main euro area indices. The banks' rally and the firmness of several of the companies linked to energy have moderated the downward pressures coming from abroad.

At the end of the session, the Ibex fell 1.07%. Thus, it consolidates the negative balance in December, with monthly cuts of 1.6%, and ends the year at 8,229 points. This level represents losses of 5.5% in the accumulated of 2022.

Today's session, far from serving to make up the annual balance, has been a reflection of the multiple doubts prevailing throughout the year among investors. The higher-than-expected slowdown known today in the Spanish CPI has been of little use, dropping to 5.8% in December. In recent sessions, amid a dearth of macro and monetary news, investors in Europe and the United States have redoubled their doses of caution given the impact that the current wave of Covid infections in China may have. European countries are beginning to take action given the high percentage of positives among travelers from China, and analysts are consolidating their prospects of a new contraction in economic activity in the Asian giant in December. The expected macro boost thanks to its reopening plans will have to wait.

The last portfolio adjustments of the year have had a particularly bearish bias between utilities and energy. Central banks are still contemplating several additional rate hikes in 2023, and the latest reports of a drastic drop in energy prices are not helping the sector. Naturgy and Redeia have lost more than 2%, and Enagás 1.99%.

The fear of new air restrictions as a result of the wave of positives for Covid in China has once again weighed down the price of the companies most closely linked to tourism. The shares of the IAG airline have today led the declines of the Ibex, with cuts of 2.6%. Other companies linked to air traffic such as Aena and Amadeus have lost 1.5%.

The improvement of the Ibex compared to the rest of the European indices in 2022 is mainly a consequence of the stock market rally of the banks and the firmness of the energy companies, the two sectors with the highest weighting in the index. CaixaBank and Sabadell, encouraged by the rate hikes, have shone at the end of 2022 with revaluations of 59% and 58%, respectively. Repsol, driven by oil and gas prices, has close to a 50% profit on the stock market.

At the opposite extreme, that of falls, have highlighted values ​​that accumulated strong increases in previous years. Fluidra and Rovi have lost more than 50% in the year, and Cellnex and Grifols 39% and 36%, respectively. The change in the interest rate cycle, with the consequent increase in financing costs, has deflated its rally. In the case of Rovi, investors have also discounted a lower contribution to their upcoming income statements from the agreement with Moderna for its Covid vaccine.

The rest of the European stock markets have put aside any hint of a 'Santa Claus rally'. The references from China have aggravated the pressures on the growth of the world economy today, in addition to stressing the supply chain and transferring new inflationary pressures. On the last day of the year, the pan-European Stoxx 600 index has lost 1.27%, and ends the year just below 425 points, with losses of 12.9% in 2022. The British Ftse, the only one of the large indices Europeans that closed the year positively (1%), today reduced their falls to 0.8%. For its part, the German Dax ended the year at 13,923 points, with -12% for the year, compared to -9.5% for the French Cac and -13% for the Italian Mib.

The last portfolio adjustments of the year in European equities have exceeded the 2% penalty for companies such as LVMH and Hermes with direct exposure to China, and which in previous sessions had stood out on the rise thanks to the gradual reopening of the Asian giant. In the Milan Stock Exchange, the eyes, and the share sales, have been concentrated on Telecom Italia, with final falls of 3.6%. The Government of Giorgia Meloni intends to take control of the fixed network infrastructure of the teleco, and leave "everything else" in the market.

Without major references in Europe and the United States during the week, the markets have focused their focus on Asia, and more specifically on China. The health and economic alerts with which the Asian giant says goodbye to 2022 have resulted in losses in the year of 21% in the CSI 300 index. The falls have also reached Japan, with decreases of 9.5% in the Nikkei. In Asian equities as a whole, the correction was 19%, the highest since 2008.

The 'currency effect' has played an important role in the markets in 2022, with lurches that have reached historical dimensions, for example, in the British pound. The government crisis in the United Kingdom sank the pound to the edge of its parity with the dollar. After sinking to a low of $1.03 at the end of September, the British currency ended the year at $1.20, still the result of a fall of 11% in the year. The euro has managed to reduce these losses to 6% thanks to a comeback in recent months that today returns its price to $1.06.

The lurches in the price of the dollar have been felt in the oil market, monopolized by the US currency. The 2022 financial year has brought two opposite halves of the year. The spectacular bullish rally of the first semester, with the war in Ukraine as the main trigger, has given way to a no less abrupt correction due to fears of the effects of a possible recession. The barrel of Brent is close to 84 dollars today, with an annual upward balance of close to 6% thanks to the comeback in recent weeks.

The rises have ended up being much more forceful in interest on debt than in oil. The historical inflation figures reached after the start of the war in Ukraine and the whirlwind of rate hikes have triggered the required yields on debt, which evolve inversely to its price. At the end of the year, the yield on the ten-year US bond was around 3.85%. In Europe, the interest rate of the German bund is close to 2.50%, and that of the Spanish ten-year bond is 3.60%.

The final stretch of the year has saved the annual balance of gold. The falls suffered in the midst of rate hikes and the dollar rally have given way in recent months to a rise in the price of the precious metal. Gold says goodbye to 2022 entrenched above $1,800 an ounce. The resistance of gold contrasts with the setback registered by bitcoin. The cryptocurrency remains stuck at the $16,000 threshold today, unable to stray too far from its recent two-year lows. In the year the bitcoin exceeds 60% of losses.