The Ibex activates the rebound to recover 8,000 points

The storm unleashed yesterday in the markets gives way to a session, for the time being, of recovery, except in the euro, which repeats its lows. 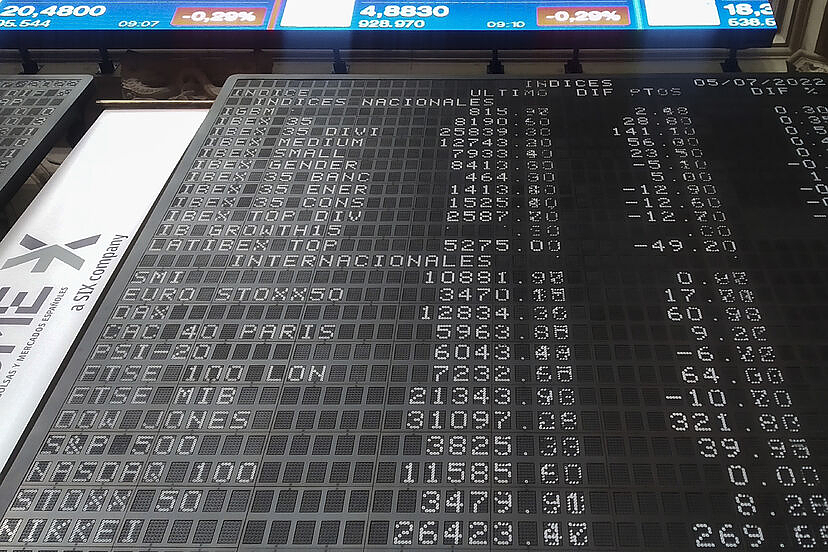 The storm unleashed yesterday in the markets gives way to a session, for the time being, of recovery, except in the euro, which repeats its lows. Oil cuts its fall, and the rebound moves to equities, with the Ibex above the 8,000 points lost yesterday.

The maelstrom of news that a single day can bring in the midst of the prevailing instability in the markets forces us to speed up and multiply portfolio adjustments. Investors no longer just have to watch the effects of interest on debt or the price of oil on the shares they hold. In sessions like yesterday's, they had to respond to a joint collapse in interest rates on debt, the euro and oil, and at the same time, an increase in recession alerts.

Europe, beset by fear of energy rationing due to supply shortages, comes out especially badly in the forecasts on the magnitude of the economic downturn. The cut off of the Russian gas tap puts Europe on the ropes. Hence, yesterday the euro led the losses in the foreign exchange market and that European equities led the falls in equities, with a corrective 2.91% in the German Dax, compared to the final advances that achieved the other side of the Atlantic the S

The firmness that moved Wall Street to yesterday's close helps today's rebound in Europe, in a session in which one of the key events of the day, the publication of the Fed's minutes, will not be known until the markets close Europeans. With inflation still skyrocketing, analysts predict that the minutes of the last meeting of the Federal Reserve will pick up a tough tone in its fight against inflationary tensions. Barring surprises in today's minutes, the market is pricing in another 75 basis point rally at the Fed's July meeting.

Europe activates the rebound, and the Spanish stock market takes advantage of the truce to recover part of the ground lost in yesterday's session. The comeback of the Ibex points above the barrier of 8,000 points erased in yesterday's corrective, when the Spanish selective index ended up deflating by 2.48%, to 7,959 points, its lowest levels since March.

The rest of the European stock markets take a breather after the setback of the previous session. The unexpected rise of 0.1% in industrial orders for May in Germany, against the -0.6% forecast, helps contain recession warnings. In return, the problem of the shortage of energy supply persists, with gas in the sights of investors. The British FTSE tries to stop its falls above the barrier of 7,000 points, on a day in which political uncertainty returns to the scene in London after the resignation of two of Boris Johnson's ministers.

Among the multiple fronts to watch, the oil market stands out. Yesterday, amid growing fears of a recession in Europe, it touched the 10% collapse, and the barrel of Brent was one step away from falling below the 100 dollar barrier. Today it activates a timid rebound that keeps its price above triple digits. The West Texas-type barrel, a reference in the United States, has more problems to keep the 100 dollars.

The downward pressure on oil does not come only from forecasts of a slowdown in economic growth. The rise of the dollar, the currency that monopolizes the commodity market, also plays against it. The recession alerts in Europe aggravated by the energy deficit and the more defensive profile of the dollar have deflated the price of the euro to 1.02 dollars, its lowest levels in 20 years, and one step away from parity. Losses are also gaining strength in the British pound after the resignation of two ministers from Boris Johnson's government, including Finance Minister Rishi Sunak. The pound falls to $1.19.

The expected macro deterioration and the brake on inflationary pressures from oil have accelerated the decline in interest on the debt. Investors have reactivated purchases of one of the most defensive assets, public debt, and this resurgence of investor appetite deflates returns. The interest rate on the German bund falls to 1.2%, far from the 1.76% it reached just a couple of weeks ago, and the required return on the ten-year Spanish bond cools to around 2.3%. In the US, the interest on its ten-year debt continues to decline, and is already trading at 2.8%, compared to its recent maximum of 3.49%.

The rise in the dollar has led to another corrective to the price of gold. The precious metal, far from emerging strengthened from yesterday's downward spiral in the markets, has accelerated its falls to around 1,760 dollars an ounce, new lows for the year. More stability presents the price of bitcoin, anchored one day closer to 20,000 dollars.