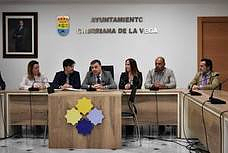 Antonio Narvaez (mayor of Churriana de la Vega) received Francisco Fuentes, sub-delegate of the Government of Granada, at the City Council. This institutional visit included a review of the various actions outlined in the Program for the Promotion of Agricultural Employment ( PFEA ) for the fiscal years 2016/2017.

After meeting in the Plenary Hall, the City Council signed the signature book. The mayor and deputy delegate then toured various locations where these actions are being done at no cost to the funds. The green path for the Arabuleila diversion is being completed. This project has attracted a global investment from the PFEA of 86.225 euros and has resulted in the hiring of 43 people.

The PFEA involved a total investment of over 200,000 euro in Churriana between 2016 and 2017. More than 62% of this was contributed by the Government of Spain through the PFEA. The rest of the budget was contributed by The City Council, Provincial Council of Granada and the Junta de Andalucia. The remainder of the budget has been used to partially intubate the ditch that runs along the right bank of Churriana's Dilar River.

These actions led to the hiring 50 people, 41 of whom were laborers and nine of them officers. Francisco Fuentes highlighted the importance of this Program for the employment sector in the province. It encourages the hiring and supervision of local workers.

Churriana de la Vega, in addition to the PFEA funding, is also part of the Metropolitano Suroeste’ action. This has a total funding of 10 million Euros from the third call of aid from the European Regional Development Fund FEDER to co-finance strategies for Sustainable and Integrated Urban Development EDUSI.

Together with the Churriana government, the mayor and deputy delegate visited other infrastructures and potential projects for the municipality. They also attended to media members present at the meeting. Antonio Narvaez highlighted the "close collaboration of the Government of Spain and the municipalities, as well as its willingness to work for residents of Churriana".

For the 2017-2018 financial years, the PFEA had a budget of almost 21 million euros in the province. This program is intended to provide an income supplement, preferably for the group possible agrarian beneficiaries under the Special Agrarian Regime's unemployment subsidy, as well as beneficiaries of the Agricultural Income through their participation at the execution of projects in general interest and municipal jurisdiction.

‹ ›
Keywords:
PfeaFacilitaContratacionPersonasChurriana
Your comment has been forwarded to the administrator for approval.×
Warning! Will constitute a criminal offense, illegal, threatening, offensive, insulting and swearing, derogatory, defamatory, vulgar, pornographic, indecent, personality rights, damaging or similar nature in the nature of all kinds of financial content, legal, criminal and administrative responsibility for the content of the sender member / members are belong.
Related News