The Granada supermarket robber, who entered prison when he was 20 years old, is still in prison at 51 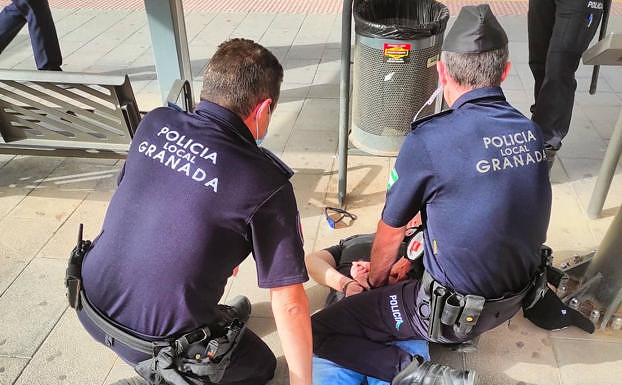 Two agents of the GOAD group – operational group for attention and diversity - of Granada Local Police arrested a 51-year old robber. He was wanted for committing different robberies at gas stations in the Metropolitan Belt of Granada. The uniformed officers knew that the suspect was on his way from Chauchina to Granada yesterday morning. They waited at the La Caleta stop for him and tried to restrain him. He refused and fled. The two officers quickly caught up to him and tied him. Due to the resistance of this person, minor injuries have occurred to the two officers. They have been taken to a hospital for treatment.

Fuente Vaqueros is where the man was arrested. He had not returned from December's prison permit and was now on the streets. During his escape, he allegedly committed numerous robberies of gas stations in the Metropolitan Belt of Granada as well as other robberies of the capital of Granada. He had different arrest warrants. He was sought by the National Police and Civil Guard. A Granada criminal court had not yet committed him to prison following his second prison permit. This was from a conviction for 27 robberies in restaurants and cafeterias in 2017.

Because they knew he needed to get off at La Caleta, the GOAD agents waited for him. The agents saw the man get out of the bus and approached him. It took them very little time to catch up to him. He was not armed at the time of his arrest.

Sources close to him say that he was a young criminal who began robbery in supermarkets using firearms at an early age. He began going in and out prison at twenty-five, a practice he still maintains today at 51. He did not use guns in his last robberies but rather knives and razors.

The criminal known as 'Berrillo,' escaped prison in December. They say he was hiding in a farmhouse during this time. He then began to commit robberies and returned to his old ways.

The Civil Guard dismantled a criminal gang that was very active between February and May 2017. They attributed the robbery of 27 catering establishments in the Province of Granada, between February and May 2017. Five people were part of the gang, who used weekend prison permits to steal. Yesterday's robber, the 'Berrillo,' was among the five people arrested by the Civil Guard. They operated in a similar way. Using weekend prison permits, they stole a car. On Saturday and Sunday night, they toured the Loja, Alpujarra, and Granada Metropolitan Areas. Each time they visited a bar they would break into and steal cash registers and machine boxes. Then they smashed them with an axe. After forcing the blinds open with a shear, they entered the establishments.

Although he is not a blood criminal, this individual is considered to be a very dangerous criminal. He has been involved in numerous robberies, robberies using force, and crimes for illegally possessing weapons. Two agents of the GOAD of Granada were treated at a hospital for injuries, while the detainee was taken to the National Police cells in preparation to be taken to court.

In the next few hours, the 'Berrillo’ will be released from prison.

‹ ›
Keywords:
AtracadorSupermercadosComenzoEntrarPrisionAnosSigueCarcel
Your comment has been forwarded to the administrator for approval.×
Warning! Will constitute a criminal offense, illegal, threatening, offensive, insulting and swearing, derogatory, defamatory, vulgar, pornographic, indecent, personality rights, damaging or similar nature in the nature of all kinds of financial content, legal, criminal and administrative responsibility for the content of the sender member / members are belong.
Related News