The high court, firmly rooted in conservatism, seems ready to make a historic U-turn, as it did in June by overturning its "Roe v. 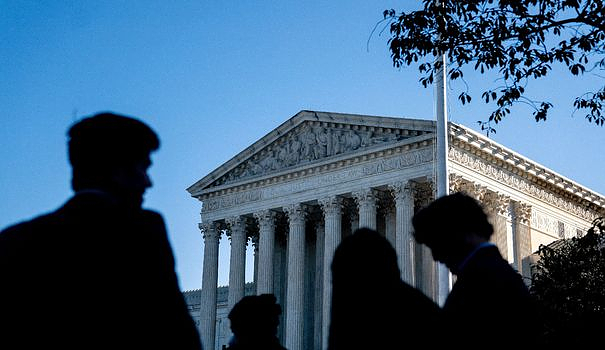 The high court, firmly rooted in conservatism, seems ready to make a historic U-turn, as it did in June by overturning its "Roe v. Wade" judgment, which for half a century had guaranteed the right of American women to abort.

Concretely, its nine sages will examine for two hours the selection mechanisms within the universities of Harvard and North Carolina, respectively the oldest private and public higher education establishments in the country.

These universities, like many others in the United States, take into account ethnic criteria to ensure the diversity of their students and correct the under-representation of young blacks and Hispanics.

These so-called “positive discrimination” programs, set up in the late 1960s, “aim to correct the systemic inequalities inherited from the past”, underlined Yasmin Cader, of the powerful civil rights organization ACLU, during a recent press conference.

They have always been fiercely contested on the right. White students, claiming to be victims of "reverse discrimination", have regularly filed complaints against these mechanisms deemed opaque and ineffective by their detractors.

Nine states have already banned them, including California after a popular initiative referendum.

But so far, the Supreme Court has always validated them.

In a series of rulings, the first of which dates back to 1978, it prohibited the use of quotas, but ruled that universities could take into account the skin color or ethnic origin of applicants, among other things. criteria, in order to promote diversity on their campuses.

The association "Students for Fair admission", created by Edward Blum, a neoconservative activist and ferocious detractor of positive discrimination, has taken a new angle of attack to return to the charge.

In 2014, she filed two complaints to denounce "discrimination" against students of Asian origin at Harvard and the University of North Carolina. These students are proportionally under-represented in these establishments given their academic results, which are above average, she argued.

After losing in several courts, the association turned to the Supreme Court and asked it to take advantage of these cases to declare that the Constitution prohibits all forms of discrimination, including positive ones.

By accepting his appeal when it rejects the vast majority of the cases addressed to him, the high court suggested that it could agree with him, which would have immense repercussions, in the educational sector, but also 'use.

With such stakes, major players intervened in the procedure.

"The future of our country depends on its ability to have leaders with varied profiles, capable of leading an increasingly diverse society", pleaded in particular the government of Democratic President Joe Biden, who defends the status quo.

In the same vein, large companies, including Apple, General Motors, Accenture or Starbucks have pointed out that having "a diverse workforce improves their performance" and that they "depend on schools across the country to train their future employees" .

“I think that, like Roe, the Court will reconsider its jurisprudence,” said jurist Ilya Shapiro of the conservative think tank Manhattan Institute, recently, predicting that the six conservative magistrates would unite against their three progressive colleagues.

Three have already expressed their hostility to the programs in question. "If we want to put an end to racial discrimination, we must stop discriminating on racial grounds", wrote in particular in 2007 the head of the Court, John Roberts.

The other three were chosen by ex-President Donald Trump, who had tried to unravel these policies during his tenure.

The progressive camp is also weakened: the black judge Ketanji Brown Jackson recused herself in the Harvard file because she was part of the supervisory board of the establishment.

“We face the threat that the generation behind us will have less rights than us,” concludes Yasmin Cader of the ACLU. "And I say that as an African-American who was able to go to law school because of the case law of the Court..."