The Frontiers of Knowledge award winners are presented to the Guggenheim

The Guggenheim Museum hosted the inaugural event with which the BBVA Foundation Frontiers of Knowledge Awards were presented. 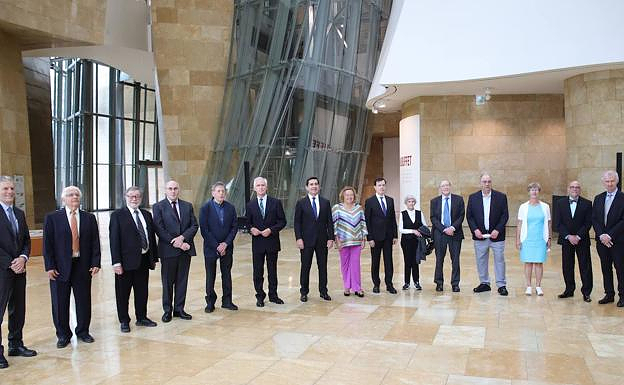 The Guggenheim Museum hosted the inaugural event with which the BBVA Foundation Frontiers of Knowledge Awards were presented. The atrium at the Abandoibarra Museum has served as the stage for a family photograph of the winners, just like it was done in Bilbao, which became the permanent venue for this year's awards. The museum's permanent collection was visited by the winners, as well as the temporary exhibition "Motion". Cars, Art, Architecture'.

After three years, the Frontiers of Knowledge acts return to normal. The delivery of the Frontiers of Knowledge was suspended in 2020. There was also a double celebration in 2021. 11 of the 35 winners of the twelfth edition and the thirteenth edition could not attend because of restrictions imposed by the pandemic. Only one of the 14 winners this year, Charles Fefferman from the United States, was unable to travel to Biscayan capital due to health reasons. All the rest of the winners have been to the Guggenheim's welcome and are already walking through Bilbao's main streets, which have banners with their faces.

The Frontiers of Knowledge, which are endowed with 400,000 euro in each of eight categories, is one of the most important prizes in world. They also include the Nobel, Kavli and Kyoto, as well as the Wolf. Twenty recipients of the award have received the Nobel since its inception in 2008. This gives you an idea of its quality. Five scientists already honoured by the BBVA Foundation were recognized by the Swedish Academy last year. David Julius and Ardem Patoputian were among them. They won the Nobel Prize in Medicine for "discovering receptors for temperature and contact" just weeks after they received the Frontiers of Biology and Biomedicine in Bilbao.

It is likely that many of this year's winners will follow the same path. Katalin Kariko and Robert Langer, as well as Drew Weissman, are very well placed. They have been developing the technology since the 1970s, which has allowed us to develop messenger RNA-based vaccines for covid. On Thursday, they will be joined by Lonnie Thompson and Ellen Mosley Thompson, glaciologists who have demonstrated that climate change has been occurring at an unprecedented rate. Other thinkers and creators like Philip Glass have also made it possible to explore uncharted paths in the human mind, such as Lonnie Thompson and Lonnie Thompson. There are thirteen people who have made Bilbao the capital of world knowledge.

‹ ›
Keywords:
GuggenheimRecibeGalardonadosPremiosFronterasConocimiento
Your comment has been forwarded to the administrator for approval.×
Warning! Will constitute a criminal offense, illegal, threatening, offensive, insulting and swearing, derogatory, defamatory, vulgar, pornographic, indecent, personality rights, damaging or similar nature in the nature of all kinds of financial content, legal, criminal and administrative responsibility for the content of the sender member / members are belong.
Related News