The Friends of British Royalty bid farewell to the Queen

The sun was already low in the late summer evening when the eight members of the Friends of British Royalty got together. 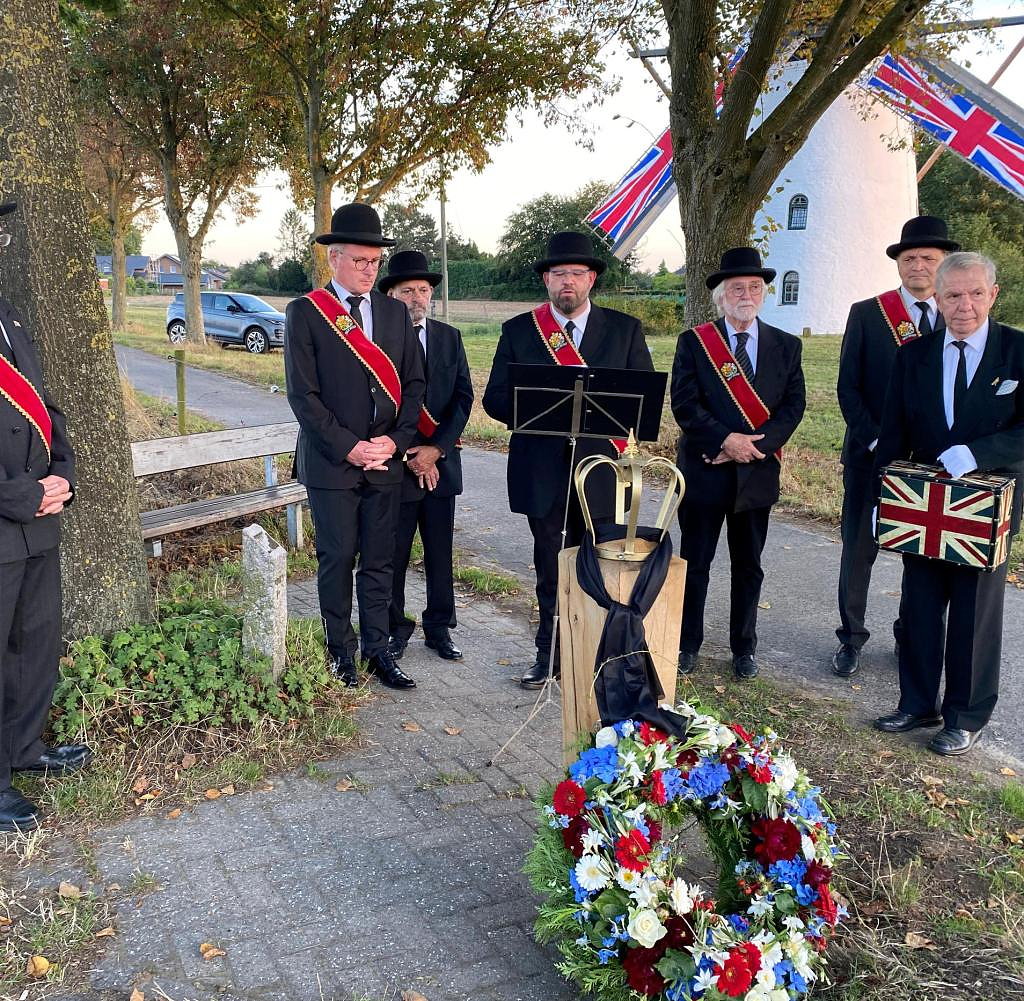 The sun was already low in the late summer evening when the eight members of the Friends of British Royalty got together. They wore bowlers, black suits and red sashes. A bagpiper in a kilt played sad melodies. The small group silently marched up a hill to a windmill whose blades were emblazoned with the British flag. The Gentlemen, as they call themselves, bid farewell to the Queen with their own ceremony.

The Stammenmühle in Nettetal-Hinsbeck is the seat of this small club, whose members firstly take care of the old mill and secondly are dedicated to worshiping the British royal family. Because there is a real connection there: on June 2, 1953, the mill served as a relay station for Northwest German Radio for a television broadcast of the coronation ceremony, because this district, 88 meters above sea level, is the highest elevation between London and Cologne.

Arrived at a wooden steele, which the club erected for the Queen's 70th jubilee, the gentlemen laid a wreath. Bastian Rütten, chairman of the Mühlenverein, gave a short speech, recalling the club's trips to Great Britain – and that the Queen's life was full of challenges. "She was everybody's grandmother." The Queen once said, "We shouldn't take ourselves too seriously. None of us has a monopoly on wisdom." This sentence stands for a lot of what made up her style and humor.

At the end of his speech, Rütten quoted the bear Paddington, the fictional character with whom the Queen appeared together in a video on the occasion of her 70th jubilee. After the Queen and Bear noted in the clip that they both always had a sandwich with them for emergencies, Paddington looked at them wide-eyed and said, "Thank you Ma'am, for everything." Thank you, for everything.

The Friends of British Royalty will continue under King Charles, assures club founder Bernhard Zanders. “We are dedicated to promoting the style of British gentlemen. And they stand for reliability, courtesy and openness.”

‹ ›
Keywords:
TexttospeechQueenNordrheinWestfalenQueen Elizabeth II.MusikSchottenrock
Your comment has been forwarded to the administrator for approval.×
Warning! Will constitute a criminal offense, illegal, threatening, offensive, insulting and swearing, derogatory, defamatory, vulgar, pornographic, indecent, personality rights, damaging or similar nature in the nature of all kinds of financial content, legal, criminal and administrative responsibility for the content of the sender member / members are belong.
Related News