The first Frenchman engaged in Ukraine says: "I met idealists and criminals"

In early March, Florent Coury was one of the first French people to cross half of Europe to reach Ukraine, with the idea of ​​fighting the Russian invasion alongside Ukrainian soldiers and civilians. 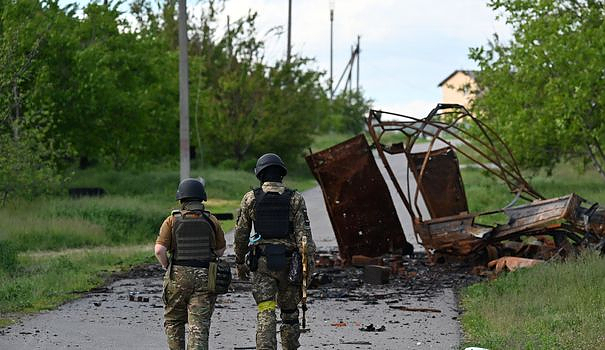 In early March, Florent Coury was one of the first French people to cross half of Europe to reach Ukraine, with the idea of ​​fighting the Russian invasion alongside Ukrainian soldiers and civilians. Committed to the Georgian Legion in Ukraine, where he was quickly appointed responsible for the selection and training of Western volunteers, this father of a family will remain in the country for nearly two months. In his book Committed Voluntary (Flammarion, 2022), to be published this Wednesday, September 7, this former HRD from Renault recounts the common life of the base, in Lviv, describes the men and women with whom he shared his daily life, confides in the tense ties with his relatives who remained in France and shares, above all, his vision of democracy. Maintenance.

L'Express: You were one of the first French people to leave for Ukraine, just a few days after the Russian offensive of February 24. What did you expect to discover in the field?

Florent Coury: That's precisely the whole point: with the other volunteers, we had absolutely no idea what awaited us there. At each stage, we just said to ourselves that it was already incredible to have come to this, to have moved, dared, done something. It was already a victory in itself. Then, the missions have evolved over time, as you might expect when you leave without military experience in a country plunged in a few days into war and into the unknown. It's the messy picture of a struggling nation.

For my part, I was assigned to a foreign unit, the Georgian Legion, since the International Legion launched by Zelensky a few days later did not yet exist. At first, I took my place in an infantry platoon mostly made up of foreign civilians, near Lviv, under the command of the Ukrainian reserve units that were training us. After a week, I was assigned to press relations missions: I organized interviews with media from all over the world, I highlighted our Legion, and I communicated on the need for the West to help the 'Ukraine. I did not go to fight on the front. Finally, I was entrusted with the recruitment and selection of foreigners who arrived at the rear base to send them to the forward base. For weeks, we built up this army of foreigners, many left, it was very unstable.

Former HRD at Renault and father of a family, Florent Coury spent two months in the Georgian Legion in Ukraine.

From the first chapter of your book, and throughout your story, you paint a portrait of the people you met in the Georgian Legion in Ukraine. You thus speak of a "group of neophytes", describing the youth or the dubious psychological profile of some of them and underlining the inadequacy of volunteers with real military experience. Were you surprised to find so many atypical profiles on site?

Each has come to seek in this war something of its own. Some were looking for redemption, others for meaning in their daily lives. I met a 20-year-old kid who didn't have a very clear political vision, others who I later learned were ex-criminals, still others who were active soldiers in their country, which had deserted to prevent kyiv from falling and which precisely wanted to train these neophytes. I also met idealists, and despairing ones. Maybe we were all a mixture of that. I even shared meals or chatted for hours with people I probably wouldn't have another coffee with if I ran into them again on the street, simply because they were insane!

I'm trying to show in the book all the inner conflicts that I may have had concerning the people with whom I shared my daily life. So yes, it was a mess, with people coming from all walks of life, Trumpists, radicals and others, and yet they were all on the good side, in a way. To want to fight for democracy. Some, like the Balts, were there because they knew their country was next on the list. Others also came for no apparent reason: in my book, for example, I portray an Austrian entrepreneur of Polish origin, who was simply fed up with his life, the problems with his wife, and who wanted to something else.

You also intersperse your story with these different portraits of soldiers, civilians or traveling companions encountered during your trip. Why ?

To make it more dynamic from a narrative point of view, on the one hand. And because I am writing this book precisely for them: I wanted to bear witness to these women and men who are simply trying to adapt to the situation, whether they have chosen to be there or not. I wanted to share with the reader the feeling I had there, that is to say this feeling of being in symbiosis with an entire country, united for something bigger than us. It's very hard to describe, but it was very strong.

You describe in your book the daily meals, the training sessions, the round trips to the shelters... But also sometimes your feeling of happiness, of usefulness. What was the atmosphere on the base?

We were in the rear base, so relatively well off compared to the soldiers on the front. However, it was very Spartan: we slept in a dormitory, most often on the floor. There was a very particular rhythm of life, air alerts that prevented us from sleeping properly. We spent the days looking for ourselves as future fighters, we had training alone, with Ukrainian soldiers or our foreign instructors. And there were also houses on our base, which looks like a military block. So there was all this slightly unexpected side, a little lunar, where we rubbed shoulders with the civilians within the base.

I had the feeling that I was in my place, in the immediacy, on the side of good. When, for example, I saw an 18-month-old girl pass through a row of soldiers in a shelter, I immediately knew why I had come. I was where I needed to be. Moreover, war is mythologized as if everything were only tragedy, whereas in the end, people live: they are in the café terraces, they are in the street, there are scenes of joy, of happiness intense. I was also happy there.

You explain that you left with the idea that you could eventually end up on the front lines, fighting. You finally spent several months communicating on the rear base, and taking on recruitment missions. Have your expectations been disappointed?

Not really, I'm happy to have done without the front and fighting! The expectation that we all had, at the beginning, was obviously to have a weapon in our hands. This quest for weapons, for military equipment, runs through the whole book. Then more often than not, you realize that you just have to stand guard, stand there and peel potatoes while the others are fighting on the front.

I left with one clear expectation: to do what I can to help. Whether it engenders a combat presence or not. It's a very intimate, political step, to know how I could be useful in a conflict like this. I quickly understood that we had to protect our freedoms by being present on the ground, I wanted to do something for the ideal of our democracies. I obviously include this in a personal journey that I recount at length in the book, which echoes my desire for revolution, my childhood memories of the tanks in Sarajevo, my support for the Kurds... But it is also a collective approach. If we are not able in Europe to recognize a democratic regime, and to fight for it - no matter how - then we have, in my opinion, lost everything that makes up our identity. If, on the other hand, we believe in freedom, then we have to show that we are ready to pay the price, with a certain notion of sacrifice. We thought it was the end of history, but it's not. I wanted to lead by example.

Have you, at times, expressed doubts about the usefulness of your presence in Ukraine?

Of course, we have these kinds of doubts all the time. Am I a cannonball, am I up to it? This is also why everyone rushes to fight, and why there is this obsession with weapons: we have the impression that it is only through combat that we could be useful. I also wondered a lot when what I was doing could become unreasonable. Me, my limit was to go to kyiv for example. There are also, of course, the doubts linked to fatigue, to the simple "I'm fed up, I can no longer contribute".

Why did you decide to return to France in mid-April?

I have a political commitment, and at the time there were legislative deadlines: I wanted to be back for the second round of the presidential election. It turns out that it didn't work, so it freed up my time to write this testimonial. I'm making a contribution that others haven't yet been able to make, and it's certainly a better contribution than anything I could have done with a gun. I am also free to go back to Ukraine whenever I wish, we will see if it will happen.

At different times in your story, you describe a very tense bond with your family and loved ones who remained in France. Why have these relationships been so difficult in your opinion?

This link, I managed it badly, if not managed at all. I left in disaster: it is necessarily a violent act, which earned me violent returns. But failing to support me, I would have liked to be understood. That was not the case. It calmed down when we understood that I was not going to fight directly, but it was still very difficult to manage the world "before". It was heartbreaking, I lost a lot of people in my life.

When I got home, the reality of the in-between rounds of the presidential election hit me, just like the bright sun, the people who were celebrating as if nothing had happened. On a set, I even met a person of Ukrainian nationality, who said to me "But what got into you?". I wanted to answer "Shit!". Emotionally, the hardest part is certainly the people who have the feeling that it was "a whim". You feel like you are not understood. It's also, in a way, why I wrote the book. I made my choice, responding to my values, and I ask that we respect it.