The EU has made it a priority to rebuild a Ukraine that is "better than what existed before the war". 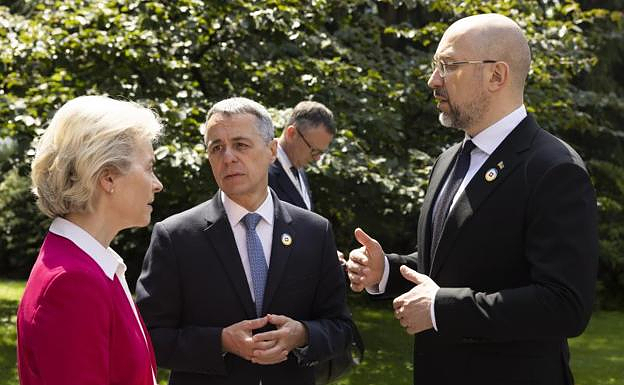 The EU has made it a priority to rebuild a Ukraine that is "better than what existed before the war". Ursula von der Leyen (President of the Commission), made this clear in a speech she delivered in Lugano, Switzerland, to address a crowd of 1,000 people from 40 States. These two days were used to lay the foundations for the recovery of the allied nation after the Russian invasion. Brussels will begin by creating a platform that can identify investment needs, coordinate actions, and channel resources.

This entity will unite countries, institutions and the private sector with civil society. It will also include international organizations like the European Bank for Reconstruction and Development and European Investment Bank. "Through this platform, the Commission will be able to offer its extensive experience in implementing programs that combine reforms with investments," stressed Von der Leyen during the Ukraine Recovery Conference. He also indicated that the Old Continent has a "special responsibility" and a "strategic interests" in supporting Ukraine against those seeking to "undermine" its existence.

Denys Shmyhal (the Ukrainian Prime Minister), was also present in Lugano with Ruslan Stefanchuk, the President of Parliament, and about one hundred others. They estimated the reconstruction cost at 750,000 million dollars or 720,000 million euros. He stated that the main source of recovery should be assets seized from Russia or the oligarchs. These funds are estimated to have a value of between $300 billion and 500 billion. He said, "They caused this huge destruction and should be held responsible."

The spiral of war in Ukraine means that the country has urgent needs and cannot wait. These are the exact demands the EU seeks out to meet with macro-financial aid of 1,000 million euros. This will be in addition to the 1,200,000,000 emergency loans that were granted during the first semester. Von der Leyen, supported by the Heads Of State and Government of Twenty-seven, had already predicted in May that the amount would reach 9,000 millions.

Volodimir Zeleski, the Ukrainian president, spoke via videoconference at the Lugano meeting and called the reconstruction of his country "the greatest contribution for world peace." He saved the speech he had given to his citizens Saturday. In it, he said that while "colossal investment, of billions", will be required, there will also "extraordinary opportunities for companies who decide to be part" of the recovery.

He said that Ukraine can emerge from all of this as a stronger, modernized country with stronger institutions and a stronger judiciary, and with more success in fighting corruption. But also with a greener and more digitally-oriented economy. The head of the Community Executive promised to strengthen Ukraine's position as a candidate for EU membership.

Von der Leyen's scenario looks a little distant with the Moscow troops on full offensive. After weeks of intense fighting, the Russian Army continued bombarding eastern Ukraine on Monday. It advanced in its plan for conquering all of Donbas. Two major towns to the west, Sloviansk (Kramatorsk) are under attack by the Kremlin.

‹ ›
Keywords:
CreaPlataformaReconstruccionUcrania
Your comment has been forwarded to the administrator for approval.×
Warning! Will constitute a criminal offense, illegal, threatening, offensive, insulting and swearing, derogatory, defamatory, vulgar, pornographic, indecent, personality rights, damaging or similar nature in the nature of all kinds of financial content, legal, criminal and administrative responsibility for the content of the sender member / members are belong.
Related News