It is between the walls of the Museum of the Future in Dubai, a building with an extraordinary ring-shaped architecture, that the wealthy Gulf emirate hosted hundreds of representatives of global tech giants for two days. 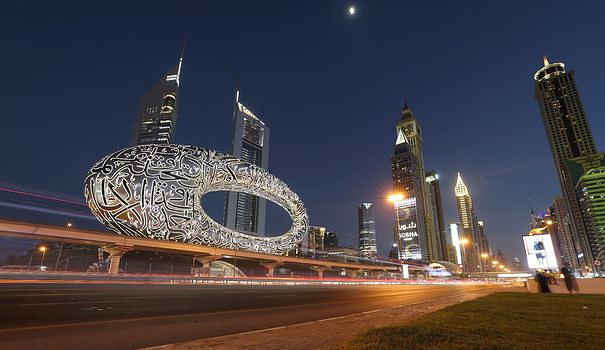 It is between the walls of the Museum of the Future in Dubai, a building with an extraordinary ring-shaped architecture, that the wealthy Gulf emirate hosted hundreds of representatives of global tech giants for two days. explore the potential of the metaverse.

Stated objective: to attract 1,000 companies specializing in blockchain and virtual technologies to make Dubai, known for its pharaonic real estate projects, "one of the ten largest metaverse economies in the world" by 2030. With, at the key , 4 billion dollars contribution to the GDP and the creation of 40,000 jobs.

Propelled to the front of the stage in the summer of 2021, the metaverse designates a digital and social universe, supposed to extend physical reality via augmented or virtual reality, and to move the internet from 2D to 3D.

For the time being, this immersive universe in which Internet users are supposed to be able to have fun, study or work, is still in the "test" phase, recognizes the Emirati Minister of Economy, Abdallah ben Touq Al-Marri, in an interview with AFP. But the pandemic has "accelerated" the trend, he said.

According to the minister, the Emirates, where more than 90% of the 10 million inhabitants are expatriates, have been attracting more and more "investments and new talents" for two years.

The country recently relaxed its residency requirements with a new visa in an effort to boost its economy by attracting highly skilled workers, such as doctors, engineers, scientists or artists.

It has also adopted a law on virtual assets, created a regulatory authority for cryptoassets, and hosted major cryptocurrency exchange platforms.

"Our employees have been trained so that they can immerse themselves in the metaverse and interact with Generation Z", very fond of online services, says Mr. Marri.

This generation, born after 1990 and fan of video games, is the object of all desires, especially in the Middle East, where nearly a third of the population is under thirty.

A global hub of finance, air travel and influencers, the now oil-poor Dubai has seen a spectacular rise by banking on luxury tourism, a hyperactive real estate sector and, more recently, new technologies.

A formula that appeals to entrepreneurs like Amin Al Zarouni, founder of Bedu ("Bedouins" in Arabic), one of the first Emirati startups to launch into the metaverse with a project called 2117, inspired by the space ambitions of the emir of Dubai who wants to install the first colony on Mars within 100 years.

Metaverse users can thus buy a ticket to board a virtual shuttle transporting the first settlers to the red planet.

“Many of us will not live long enough to see this mission with our own eyes,” explains the young entrepreneur. “So we will try to reproduce this experience in the metaverse”.

If this immersive universe is still limited to a certain tech niche, the metaverse could inject 360 billion dollars into the GDP of the countries of the Middle East, North Africa and Turkey in 10 years, underlines Meta, house mother of Facebook and Instagram, in an email sent to AFP, citing Analysis Group, an economic consulting firm.

The US tech giant admits, however, that to get there, “a lot of infrastructure and technology still needs to be deployed.” But "we also know that when there are policies in place to encourage innovation" this accelerates investment by giving "a clear signal to the whole ecosystem".

This is what we see in Dubai, according to Meta, who claims that the Emirates have "a clear strategy to accelerate the adoption of the metaverse and attract investment" for its development.