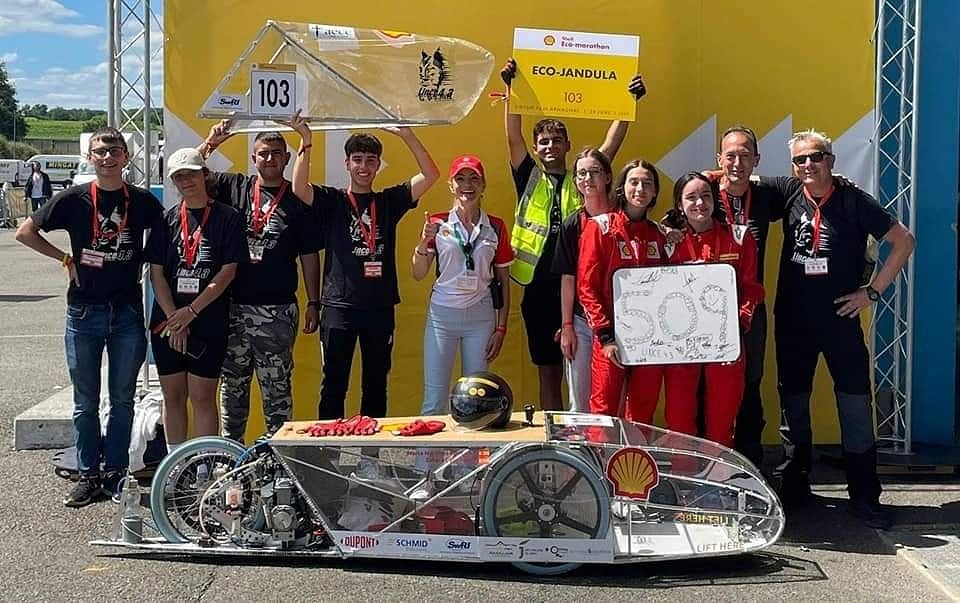 Manuel Barbero (professor at the institute's Technology) has led the team to its 12th place in the Shell Eco Marathon general classification. This was out of 50 teams that participated in the test.

Today's entourage arrived in Andujar by bus from Nogaro in France, where the annual test to find the world's most efficient vehicle was held. Andujar's expedition reached the mark of 509 km with one liter of gasoline at Circuit Paul Armagnac in France. "We are tired, but happy, with the experiences, which will surely never forget", confessed ANDUJAR ITAL Manuel Barbero as soon as he arrived to Andujar with the rest. After a 473 km first round, the Eco-Jandula team reached the final with a broken component. They were able to reach their goal of 509 km, surpassing universities, in the third and fourth rounds. and international engineering schools.

Eco-Jandula began its journey in this competition back in 2009, and has since earned the respect and admiration of its competitors. He was presented with the Andujar flag on May 22.

‹ ›
Keywords:
EquipoEcojandulaConsigueMejorPuestoShellMarathon
Your comment has been forwarded to the administrator for approval.×
Warning! Will constitute a criminal offense, illegal, threatening, offensive, insulting and swearing, derogatory, defamatory, vulgar, pornographic, indecent, personality rights, damaging or similar nature in the nature of all kinds of financial content, legal, criminal and administrative responsibility for the content of the sender member / members are belong.
Related News