The dog that dances with the sheep

The sheep have made themselves comfortable at the back of the pasture, in the shade of an old oak tree. 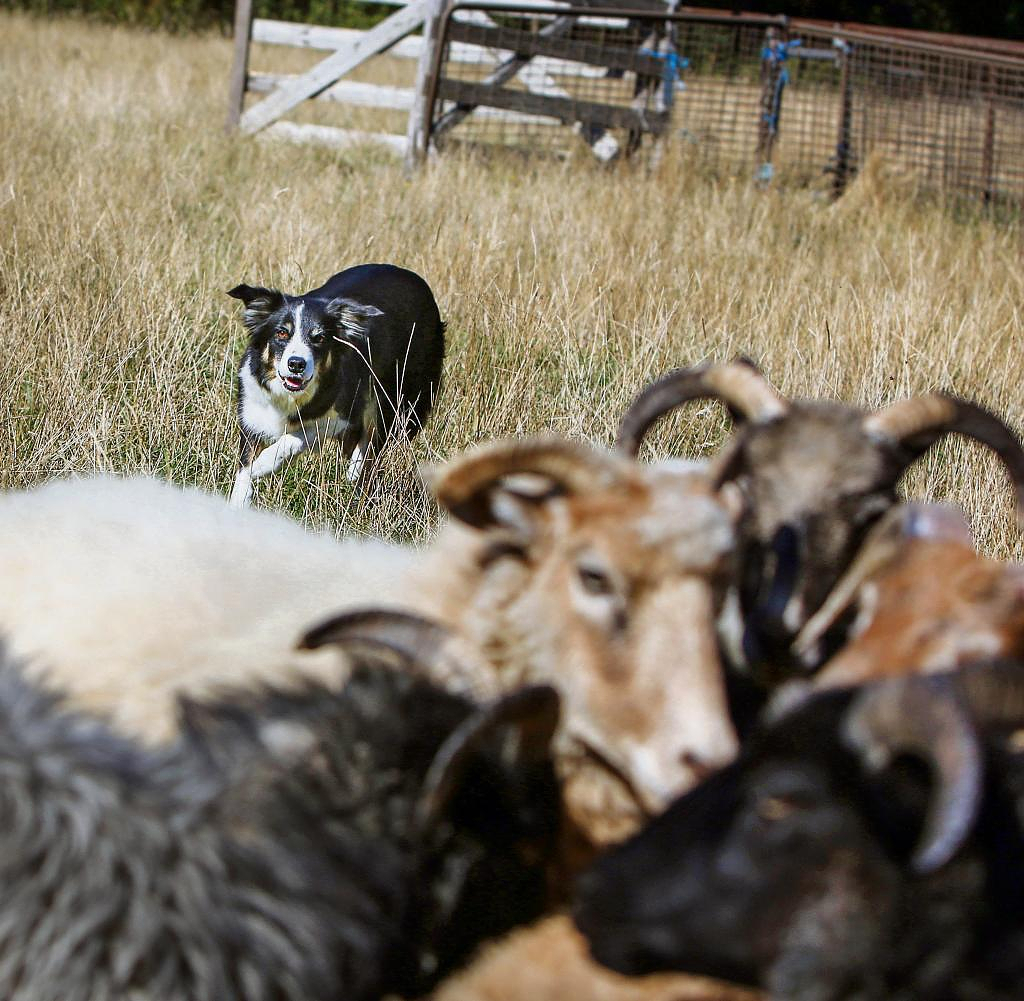 The sheep have made themselves comfortable at the back of the pasture, in the shade of an old oak tree. But then a black and white dog darts through the grass, and the sluggish troupe begins to move. First the sheep scuttle indecisively on the spot, then they start galloping. The dog circles the sheep in wide arcs, sometimes running to the left, sometimes to the right - and drives them unerringly to Sigrid Korth, who directs the action with a few shouts from afar.

Sigrid Korth from Wetter an der Ruhr, 61 years old, keeps sheep. She owns 150 so-called Drenther Heath Sheep, which she uses for various clients. She grazes on some dikes belonging to the Ruhrverband, areas of the botanical garden of the Ruhr University in Bochum and various orchards. The dogs are their most important helpers.

They are Border Collies, a breed of dog from Great Britain that specializes in working with sheep. This morning, Korth brought her two border collies, Femke and Darlyn, to the pasture. She wants to train with them today.

Korth will soon be going to the NRW championship for the so-called paddock dogs (see below). Femke and Darlyn are supposed to demonstrate that they have mastered the intricacies of dealing with sheep. Because simply driving the herd together is the easiest exercise. A paddock dog must also be able to drive the sheep so that they walk along a road in single file. He must also master the art of separating a specific sheep from the flock so that the shepherd only has to grab it.

Sigrid Korth has already taken part in these championships a few times and mostly occupied top places. However, she has never won. Is it because of the nervousness? she wonders. "If something doesn't work, it's usually the fault of the person and not the dog," she says.

Working with paddock dogs is the future of sheep farming, says Ulf Helming from East Westphalia, who keeps sheep and dogs himself and also directs the NRW championship. "In the past, when itinerant shepherds walked long distances with their animals, the classic shepherd dogs were in demand to patrol the herd," explains Helming.

Now there are mainly shepherds like Sigrid Korth, who bring their animals to mostly fenced-in areas in order to switch to the next place of action after a few days. "You need dogs with an enormously high level of comprehension for this," says Helming. "Without these dogs, a single shepherd could not do this job." In England, it is said that a single border collie replaces 20 employees.

Sigrid Korth bought her first Border Collie 17 years ago. Actually, she just wanted to do a bit of dog training with him. But then she got to know the amazing skills that Border Collies seem to love to live out on sheep pastures. And so an old childhood dream came to life in Korth. "I always wanted to have a farm when I was a girl," she says. It turned out differently. Korth studied social education and worked for a long time in a facility for the disabled. But now, with the dogs, she dared to take the first steps into a new life. "At first I just wanted a meadow for a few sheep," she says. Gradually, more and more orders came in. Korth also started training for other Shepherd Border Collies. For some time she has also been training dogs for rescue and search dog squadrons. In 2011 she quit her job.

In the meantime Femke has herded the little flock to a gate, the gate is open, but the sheep hesitate. The bitch seems to keep the sheep in check with her eyes alone. If an animal even tries to escape, Femke only shifts her body slightly and the sheep retreats. Almost like a dance. Or like two magnets that are pushed towards each other with the same pole. Inch by inch, Femke maneuvers the reluctant sheep forward. Finally they are in the gate. Sigrid Korth only needs to close the gate.

The program of the NRW Sheep Days: On Saturday and Sunday, August 20th and 21st, the NRW Sheep Days will take place at Haus Düsse near Soest, a kind of trade fair for sheep keepers. Different breeds are presented there, awards and auctions of individual animals take place. The state winner is honored by the NRW Agriculture Minister Silke Gorißen (CDU).

But there is also a supporting program and a market that makes the NRW Sheep Days interesting for non-sheep keepers. The paddock dogs competition starts on Sunday at 8 a.m., 15 dog owners are registered. At various stands there are tips and information about wool and wool processing. A spinning competition is held to determine who spins the longest thread. And another competition is about erecting the best pasture fence in the shortest possible time. Further information is available on the organizer's website.

‹ ›
Keywords:
TexttospeechNordrheinWestfalenSoestSchafeRuhrUniversität BochumHaus DüsseSigrid KorthKarriereSchafFemke
Your comment has been forwarded to the administrator for approval.×
Warning! Will constitute a criminal offense, illegal, threatening, offensive, insulting and swearing, derogatory, defamatory, vulgar, pornographic, indecent, personality rights, damaging or similar nature in the nature of all kinds of financial content, legal, criminal and administrative responsibility for the content of the sender member / members are belong.
Related News