The panel will not hear live witnesses this time but will present videos, including footage shot by a Danish crew for a documentary on Roger Stone, a longtime ally of the former Republican president. 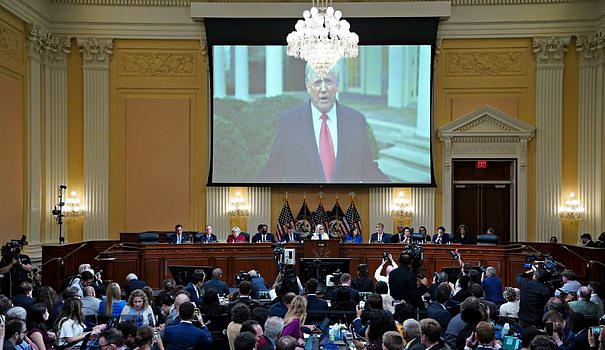 The panel will not hear live witnesses this time but will present videos, including footage shot by a Danish crew for a documentary on Roger Stone, a longtime ally of the former Republican president.

“We are going to emphasize the state of mind of the former president and his involvement in these events as they unfolded,” explained a parliamentary source.

The commission is trying to shed light on Donald Trump's behavior before, during and after the Capitol attack, which shocked the world.

On that day, January 6, 2021, Republican supporters stormed the seat of Congress to try to prevent elected officials from certifying the victory of his Democratic rival, Joe Biden, in the 2020 presidential election. Donald Trump continues today to maintain that this ballot was "stolen" from him.

Since its creation, the commission has questioned more than a thousand witnesses, including two children of Donald Trump, and peeled tens of thousands of documents.

Thursday's hearing, which may be the last before the final investigative report, will address "new things that we uncovered through our work this summer. What the president's intentions were, what he knew, what he did, what others did," commissioner Zoe Lofgren told CNN.

And these new elements are "quite surprising", she assured.

The commission is examining, among other things, the links between Mr. Trump's former adviser, Roger Stone, and far-right groups like the Proud Boys and the Oath Keepers, whose members are being prosecuted for their participation in the storming of the Capitol. .

In videos shot by the Danish team just before the 2020 presidential election, Roger Stone can be heard saying that he doesn't care about the vote.

"Fuck the vote, let's go straight to violence," he said. "If you see an antifa, (you have to) shoot to kill," he adds.

Mr Stone, who has not been charged in connection with January 6, disputed the authenticity of the videos, saying they had been manipulated.

The conservative political adviser, known for his sulphurous style and his tattoo of Richard Nixon on the back, describes himself as "a regular in dirty tricks". He was sentenced to 40 months in prison as part of the investigation into Russian interference during the 2016 presidential campaign, before seeing his sentence commuted by Donald Trump.

The commission also intends to reveal elements from the "hundreds of thousands of pages" provided by the Secret Service, according to the parliamentary source. The elected officials want to understand why certain SMS from agents sent on the day of the assault have been deleted.

The investigative report is due to be made public by the end of the year, but likely not before the November 8 parliamentary elections that will determine which party will control Congress for the remainder of President Biden's term. A preliminary text could however be published before the vote.

Members of the panel have openly suggested that Justice Secretary Merrick Garland should indict Donald Trump in connection with the attack on the Capitol. The commission itself has not officially said whether it will recommend referrals to justice.