Together with the Andalusian Irrigation Association, (Areda), the City Council of Cazorla has urged Guadalquivir Hydrographic Confederation to regulate the files of large parts of the Cazorla irrigation communities. 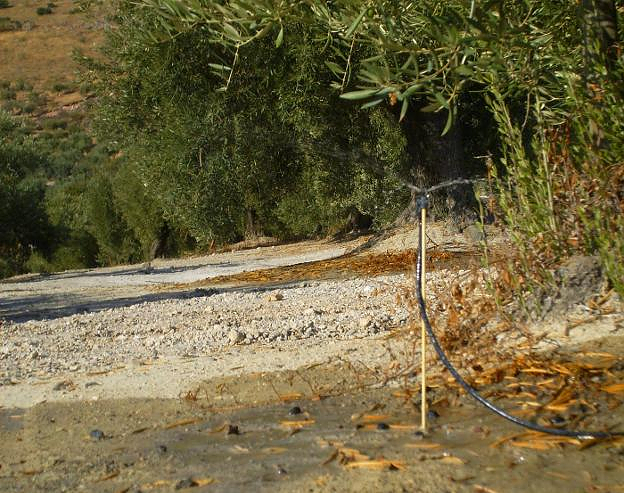 Together with the Andalusian Irrigation Association, (Areda), the City Council of Cazorla has urged Guadalquivir Hydrographic Confederation to regulate the files of large parts of the Cazorla irrigation communities. They have also expressed their concern about the suppression of extraordinary risk that could affect 1,800 hectares of Cazorla's irrigated land.

After the meeting between Antonio Jose Rodriguez, the mayor of Cazorla; Agustin Rodriguez, the vice-president at the Areda; and representatives from the directives for irrigation communities in Cazorla that are integrated in the association, CR El Molar and CR Santisimo Cristo del Consuelo, they expressed concern about the 2019 irrigation season. These affect over 1,800 hectares olive groves within the municipality.

It is a problem that the mayor expressed concern about, as it makes it difficult for the irrigators in his municipality to access public money and to call for assistance from the Junta de Andalucia to modernize farms and facilities, or to be able co-finance agriculture machinery. He explained that the CHG concession file>> does not allow the farmer to withdraw the European funds in the event of inspections.

According to the mayor, "there are many irrigation communities in the municipality who have been processing legalization documents for decades, and that for the second year consecutively they are denied the ability of irrigating because of changes in the requirements imposed during the last two campaigns." He urged Guadalquivir Hydrographic Confederation, in this spirit, to "resolve the situation and legalize irrigation files, which is a situation that is particularly concerning to the community members." Agustin Rodriguez (Vice President of Areda) stated that this type of extraordinary risk has been taken because they are under the regulatory process to be granted a concession. Rodriguez stated that these are not new irrigation files, but that they obey irrigation communities that have been irrigating since decades.

Rodriguez stated that water concessions were granted in other provinces like Cordoba and Seville with rice and olive trees, or that they have positive planning reports. He has also demanded more sensitivity from the irrigators in Jaen, and Cazorla, as they continue to be precarious 20 years after they have presented their files.

Areda's vice-president noted that this problem is not the only one. The CHG criteria are "restrictive" for olive groves as they warn that water cannot be drawn until the issue has been resolved. Authorizations have not been communicated by the agency and it is in these instances that we ask for sensitivity in authorizing.

‹ ›
Keywords:
AyuntamientoInstaLegalizarComunidadesRegantes
Your comment has been forwarded to the administrator for approval.×
Warning! Will constitute a criminal offense, illegal, threatening, offensive, insulting and swearing, derogatory, defamatory, vulgar, pornographic, indecent, personality rights, damaging or similar nature in the nature of all kinds of financial content, legal, criminal and administrative responsibility for the content of the sender member / members are belong.
Related News