The CCTV images of the Nice attack projected at the trial

From the first images of the truck, all lights off, rushing into the crowd, a cry rips the silence of the courtroom of the special assize court in Paris. 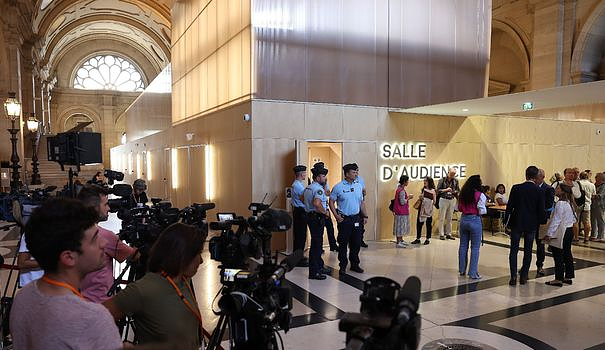 From the first images of the truck, all lights off, rushing into the crowd, a cry rips the silence of the courtroom of the special assize court in Paris. A woman comes out. We hear him cry out in pain as soon as he walks through the doors.

On the screens, we follow the continuation of the deadly race of the truck. The images are violent. A veiled woman, plaintiff, bursts into tears and hurriedly leaves the room while the cameras show the truck swerving from right to left to hit as many people as possible.

From time to time, muffled cries echo in the room. Seven psychologists, volunteer firefighters and gendarmes are there to provide assistance.

Exceptional security measures were taken during the viewing. "At the time of the broadcast of the video, all telephones must be put away, and laptops closed, including those of journalists", had warned the president of the special assize court Laurent Raviot at the opening of the hearing.

The images were broadcast simultaneously in Paris and in the retransmission room in Nice.

The attack, which lasted four minutes and seventeen seconds, killed 86 people, including several children, and injured more than 400. The images of the 19-tonne truck deliberately driving into the crowd were collected by around twenty video surveillance cameras in the city of Nice.

These "extremely violent images" are indeed "likely to enlighten the court" on the criminal act committed by Mohamed Lahouaiej-Bouhlel, President Laurent Raviot estimated on Wednesday when announcing his decision to broadcast them.

The court and several lawyers viewed these images, under seal, on Tuesday evening. "There will be no other broadcast," warned Mr. Raviot Thursday morning. Once viewed in court, the images will again be placed under seal.