In the east of the Kharkiv region (north-east), the railway network converges at one point towards the Kupyansk Vouzloviï station, then descends south towards Svatové, in the Lugansk region, annexed by Russia. 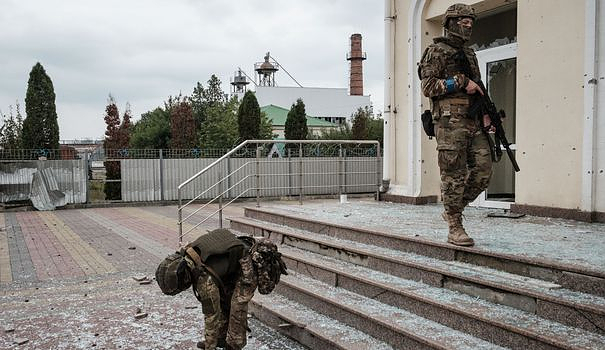 In the east of the Kharkiv region (north-east), the railway network converges at one point towards the Kupyansk Vouzloviï station, then descends south towards Svatové, in the Lugansk region, annexed by Russia.

But the situation has changed in recent days. The Ukrainian counter-offensive enabled kyiv to retake large swaths of territory in the region, forcing the Russians to withdraw.

The station, although heavily damaged, is now in the hands of the Ukrainian army.

"This site has always been an important strategic point. It is a crossroads for freight and for trains", explains "Rosomakha", a Ukrainian soldier whose nom de guerre translates as "Glutton".

Behind him, the windows of the station are shattered and the hall deserted.

During the visit of the "Rosomakha" unit to the station on Sunday, Ukrainian President Volodymyr Zelensky officially announced the capture of Lyman, on the front, in the Donetsk region, yet annexed by Moscow on Friday.

The city is "completely rid" of the Russian army, he hailed in a video, marking an important victory for kyiv, two days after Moscow formalized the annexation of Ukrainian territories that its army fully controls or controls. part.

Kupyansk Vouzloviï is located 90 km north of Lyman, along the Oskil River, not far from Kupyansk, a city taken over by the Ukrainians last week.

Faced with its failures, the Russian army had to retreat in haste in the direction of Svatové, halfway to the important cities of Severodonetsk and Lysychansk, which it had had such difficulty in taking from the Ukrainians before the summer.

Not enough to worry "Rosomakha" and his brothers in arms, determined to continue their march forward to liberate the occupied territories.

"They fled in panic and they had already redeployed their troops to other places in the middle of the summer," says the soldier, who adds that the capture of several Russian prisoners gives the Ukrainian army a good knowledge of the shots of Moscow on the ground.

According to him, the Russian army has already been reinforced by reservists, called by hundreds of thousands hastily less than ten days ago by Russian President Vladimir Putin, to stem the dynamics of kyiv.

The soldier wants to be confident and recalls that "according to Ukrainian law, these territories are part of Ukraine", he said about the regions annexed by Moscow, attachments widely condemned by kyiv and its Western allies.

"This is our land," he adds, standing a few meters from a large crater formed following a bombardment by the Russian army during its withdrawal.

"I come from the Lugansk region", still largely under Russian control, he says. "That's why I won't stop until the last Russian leaves these lands."