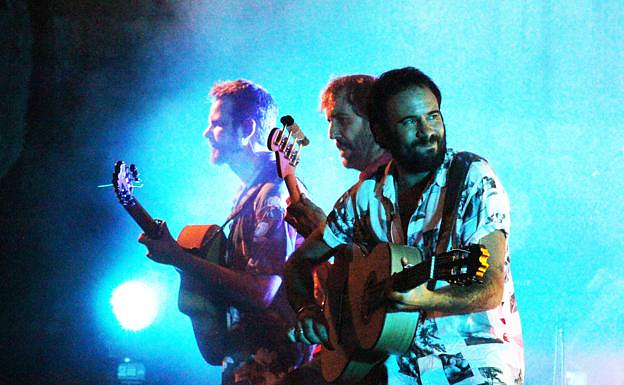 It started at 10:10 p.m. on Aug 17, and ended at the beginning of the next day, August 18. The Ruinas de Santa Mara de Cazorla was treated to a performance by 'Canijo de Jerez' that will remain indelible. This is likely that the organizers of the Cazorla Flamante' didn't consider this coincidence. That last date is significant because it marks the anniversary of Federico Garcia-Lorca's assassination, which occurred 83 years ago.

The thing is, there's so much in common between this Jerez poet and the poet from Granada, who flew without wings over the Cazorla night. Fly and fly and fly, and fly again and again without wings>>. -Fly without wings>. Both Andalusians are attached to their land, but both are free: Like the grass without the wind/ Like a stone beneath the Sun/ Burn your heart/Like the grass that grows out of the earth/Like the moon on your balcony/Free your heart>>

Canijo is a great Andalusian musician. He makes you jump, dance, laugh, and cry with joy. He is so positive that anyone who listens to him has the feeling that he can achieve what he desires: "You can get whatever you want" / Let everyone know. "It is time to leave the cave. / Join us, liberate the beast>>. -Free the beast.

The public had a wonderful time. / J.C.G.

The large crowd gathered at the Ruinas stage area released the beast. The beast was free and joyful, but also docile, respectful, and polite. There were hundreds of people on the festive bridge, from all over Andalusia as well as the rest of Spain. The mixture of accents heard was a good indicator. They were able to identify the lyrics of all the songs Canijo sang and enjoyed singing them as they watched the lights play on the walls of this magnificent historic building. They asked each Cazorleno and Cazorlena they saw: "Is this like this all year ?>>.?"

‹ ›
Keywords:
CanijoJerezVuelaSobreCazorlaMúsicaFlamenco
Your comment has been forwarded to the administrator for approval.×
Warning! Will constitute a criminal offense, illegal, threatening, offensive, insulting and swearing, derogatory, defamatory, vulgar, pornographic, indecent, personality rights, damaging or similar nature in the nature of all kinds of financial content, legal, criminal and administrative responsibility for the content of the sender member / members are belong.
Related News