The brain is more hot than we thought!

We didn't know until a few days ago that certain areas of our brain are hotter than we thought. 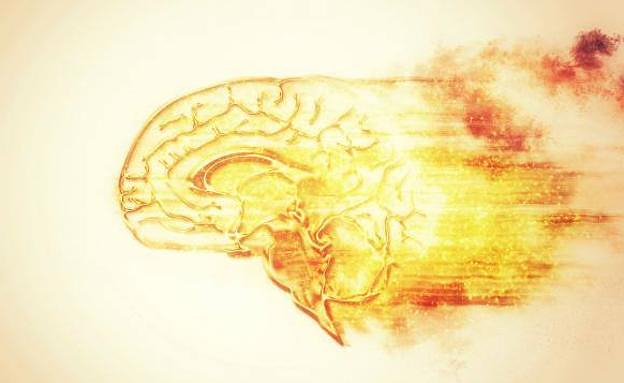 We didn't know until a few days ago that certain areas of our brain are hotter than we thought. According to Brain magazine, they can reach 41 and 42 degrees Celsius every day.

The brain doesn't burn at these levels 24/7. Temperature fluctuates throughout the day depending on neuronal activity. The brain temperature of healthy volunteers who were used as controls in the study ranged from 36 to 41 degrees with an average 38.5 degrees. However, patients with brain trauma suffered temperatures ranging from 32.6 to 42.3 degrees without any significant change in the mean.

It is evident that the brain temperature exceeds the temperature normally recorded in the mouth and armpits (around 36.5 degrees) by more then two degrees. Now the question is, "Why?"

The activity of the organelles responsible for generating energy in our cells, the mitochondria, is almost entirely what determines the temperature of our body.

A lot of heat is generated by the intense activity of these cellular power plant to produce ATP - the joker molecule that is necessary for everything to function - This heat is what maintains our body temperature. The mitochondria also contain a number of proteins that help to dissipate heat. These proteins are known as UCP (or uncoupling protein) and are abundant in fatty tissue, particularly brown.

The neuron and the glia, which are their companion cells (known collectively as glia), consume large amounts of energy and have high mitochondrial activity. Even though it accounts for only 2% in adult weight, the brain consumes 20% of all energy consumed throughout the day. It can even reach 80% in newborns.

It is therefore not surprising that high levels of heat are generated by such consumption. As with our muscles, when we exercise them, the more energy we consume, the greater the amount of heat.

In fact, brain cells contain UCP-rich mitochondria. Because they decrease cell damage due to changes in metabolism activity, these proteins are associated with cell survival.

This is not the first study to show that brain and body temperatures can fluctuate throughout the day.

The morning is when brain temperature is at its highest, while it drops in the afternoon and then drops to the evening. It is lowest at night. The activities we do also affect brain temperature fluctuations. The deepest areas, which include those that contain memory, show the greatest variation, as well as the hypothalamus.

The study revealed that patients with traumatic brain injuries lose some of their ability to vary in temperature. This has been linked to an increase in death risk, possibly because of dysfunctions in mitochondrial function.

However, older people have experienced an increase in temperature in certain areas of their brains, particularly those that are related to memory. Other studies also showed that temperature drops in other areas of the brain, possibly due to problems in blood circulation and cerebrospinal liquid.

The brain and body's temperature are controlled by blood circulation. The reason we become pale when the temperature drops is because our circulation shrinks and heat is not lost. In fact, when it's hot, the circulation in our skin is more active to help us sweat out excess heat.

This is an controversial topic, but some studies have shown neuronal damage following hyperthermia phenomena.

The study of brain temperature opens up the possibility to address in a more effective way the phenomena associated mitochondrial dysfunction, the accumulation damaged proteins, and neurodegenerative diseases (Parkinson's or Alzheimer's). These findings will allow for a faster and more accurate diagnosis.

‹ ›
Keywords:
CerebroCalientePensaba
Your comment has been forwarded to the administrator for approval.×
Warning! Will constitute a criminal offense, illegal, threatening, offensive, insulting and swearing, derogatory, defamatory, vulgar, pornographic, indecent, personality rights, damaging or similar nature in the nature of all kinds of financial content, legal, criminal and administrative responsibility for the content of the sender member / members are belong.
Related News