The boundless passion of "One Piece" manga fans in Japan

Since his childhood, Mr. 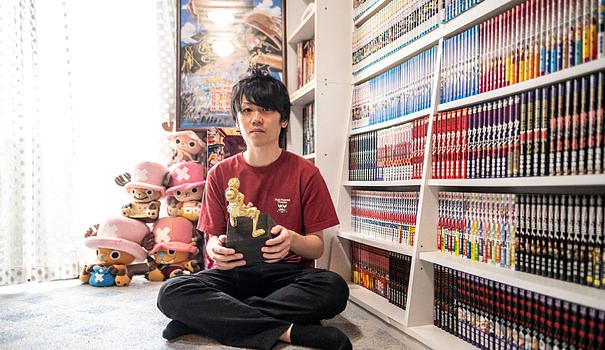 Since his childhood, Mr. Sato, 29, estimates that he has spent "well over 10 million yen (68,000 euros), if not 20 million", to collect products derived from this manga featuring the adventures of the Straw Hat Pirate Luffy and scouring Japan for "One Piece" rallies.

His friends and colleagues were therefore not surprised by the pirate ship-like cake with which he celebrated his wedding in July, then posing with his wife Junna in front of a giant poster of Luffy and his crew.

"I have always lived with One Piece and I wanted my marriage to pay homage to it", explains Mr. Sato to AFP at his Tokyo home where stuffed animals of Chopper, a half-reindeer half-human character, are enthroned near bookshelves loaded with volumes of the manga that have sold over 500 million copies worldwide.

"One Piece Film: Red", the fifteenth animated film adapted from the series in theaters since this summer, is the theatrical release that has attracted the most viewers this year in Japan. Shohei Sato has seen it 21 times.

The success was global, with the feature making one of the best starts for a Japanese animated film in France and attracting crowds of costumed fans in New York.

Fans often attribute their love for "One Piece" to its uplifting dialogue and endearing characters, so much so that author Eiichiro Oda would shed tears when he drew them crying.

The work is so abundant that its publisher Shueisha organizes a quiz on its universe every year where tens of thousands of fans compete to become the "king of knowledge". One year, Shohei Sato placed tenth.

"The world of One Piece is so meticulously thought out that I sometimes wonder if it doesn't actually exist somewhere," thinks Arimo (a pseudonym), another fan who once won fifteenth place in the same contest.

Every evening, once his son is asleep, this 32-year-old system engineer takes refuge in his office to read the manga.

This aficionado decorated the room and the rest of the house, including the toilets, with illustrations from "One Piece", and even made a terrestrial globe representing the oceans where his favorite pirates sail.

"One Piece" is published in the weekly Shonen Jump, aimed primarily at an audience of teenage boys, but its schoolboy humor, its panoply of colorful protagonists and its muscular action scenes attract a much wider readership.

“It resonates with all generations,” thinks Natsumi Takezawa, a 34-year-old Japanese woman who likes to relax with manga after picking up her 5-year-old daughter from daycare, cooking her dinner and bathing her.

Without this manga, "I would probably be too exhausted from household chores to do anything else," she says. It is "my energy".

Ms. Takezawa explains that thinking back to the scene where the hero Luffy manages to get over his brother's death thanks to his friends also helped her when she lost a close friend this year.

“What experience do you have to have to be able to draw such a powerful scene?” she wonders.

The narrative arc supposed to be the last of this work has been published since July, after its author said in 2019 that he wanted to conclude it "within five years". But for Shohei Sato, it could continue for another "seven to eight years".

“One Piece is part of my life now and I want to read it to the end,” he says. "I refuse to die before".