The Board will install a new roundabout for Churriana de la Vega on Cristobal Colon avenue.

The Ministry of Development, Infrastructure and Territory Planning of Junta de Andalucia put out a tender for the construction of a turn-around on Cristobal Colon avenue, Churriana de la Vega. 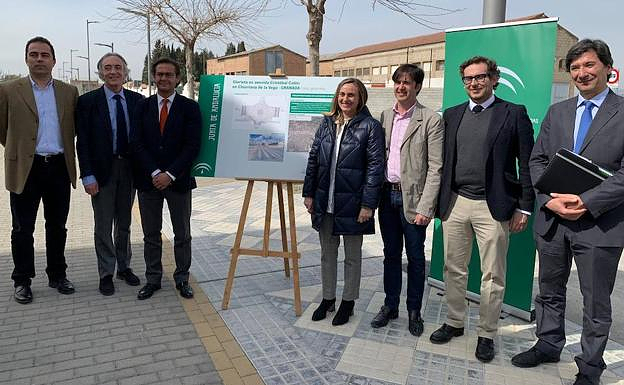 Marifran Carazo (Minister of Public Works) met with Antonio Narvaez, Churrian mayor. They also met with other Ministry officials to discuss details of the execution project. The meeting was concluded with municipal technicians. Participating companies may submit offers until March 22nd, the deadline for tender submissions. The execution period for the work contract will be approximately two and a quarter months after it has been signed and inked.

The Consistory is constantly requesting this work to improve communication and roads networks in the municipality of Granada and the Metropolitan Area. Since the agreement was signed, the action was still pending execution. Due to the construction of the metro in the capital, and in neighboring cities, it was necessary to create a new traffic route that would allow vehicles to pass through many streets within the municipality. This led to an increase in vehicle movement and deterioration on the sidewalks and roadways.

The Board's representatives have considered this necessary. The institution explained that the increase in traffic on Cristobal Colon avenue and Banos street, to join the Granada ring roads, requires a solution that improves road safety and fluidity. This roundabout is composed of two lanes, a central island measuring 8 meters in diameter and a curb measuring 2.55 meters wide to allow heavy vehicles to turn. The outer diameter will be more than 27 meters.

This includes replacing pipes for water, electricity, and lighting, as well as the roundabout drainage network and paving with bituminous mix. It also involves the implementation of pedestrian crossings. Eight lampposts, as well as horizontal and vertical signage, will be installed to enhance the lighting network. This work will be of benefit to all the residents of Churriana de la Vega, Las Gabias, and Cullar Vega as they travel by car through it on their way to Armilla and Granada.

‹ ›
Keywords:
ChurrianaVegaContaraNuevaGlorietaAvenidaCristobalColonLicitadaJunta
Your comment has been forwarded to the administrator for approval.×
Warning! Will constitute a criminal offense, illegal, threatening, offensive, insulting and swearing, derogatory, defamatory, vulgar, pornographic, indecent, personality rights, damaging or similar nature in the nature of all kinds of financial content, legal, criminal and administrative responsibility for the content of the sender member / members are belong.
Related News