The Board supports Poniente judges in their request to be made magistrates.

Through the General Secretariat for Justice of Ministry of Tourism, Regeneration and Justice, the Junta de Andalucia has written to the Ministry of Justice in support of the request of 12 judges from El Ejido and Roquetas de Mar to raise their professional categories to that of magistrates to curb mobility and stop the high rate of litigation. 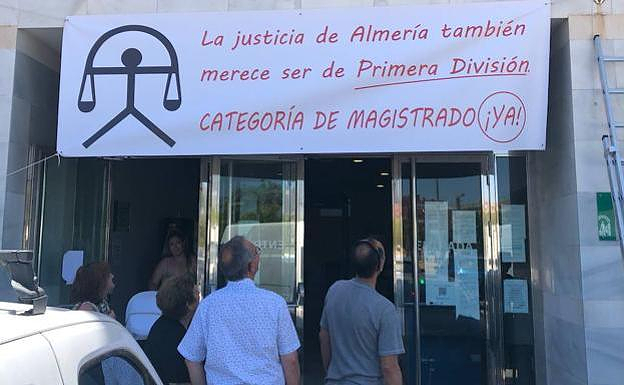 Through the General Secretariat for Justice of Ministry of Tourism, Regeneration and Justice, the Junta de Andalucia has written to the Ministry of Justice in support of the request of 12 judges from El Ejido and Roquetas de Mar to raise their professional categories to that of magistrates to curb mobility and stop the high rate of litigation.

As IDEAL reported, the judges met last week and agreed, among other things to request the elevation of this category, request information form the Government, and start protest actions. These actions have so far been focused on banners being placed at the doors of courts. However, it is possible that strikes could be initiated if the government doesn't heed the request.

Sources within the Andalusian government have confirmed their support for Poniente's request through a letter to the end of May. They understand that an elevation of the category could stop "mass flight" and disproportionate mobility, which is what the judges themselves explain when explaining their court's situation.

Senior judges from both judicial parties issued media demands in reports that did not only affect the elevation of this category dependent on Spain but also affected human and material resources which are dependent on the Junta de Andalucia. Roquetas, for instance, requests that all court staff be equated. Since three of six officials in Roquetas have had one less, this means that there is a need for at minimum four additional people in the Common Notification Service, and one more at the Civil Registry Office.

Roquetas' situation is most perilous, considering that it has courts that not only handle a higher volume of work than usual, but also operate in rented premises as they wait for a new courthouse such as El Ejido which has been paralysed for over a decade. A planned reform of the premises was halted by the announcement of the establishment of the seventh court. The space that was to be rented for expansion will now be used to support the seventh court.

Judges and LAJ of El Ejido's judicial districts of Roquetas, Mar, and El Ejido stated that the Ministry of Justice would create a seventh court in Roquetas. However, they believe the best solution is to implement magistrate positions and a subsequent increase in civil servants in both.

Roquetas' and El Ejido's judicial bodies demanded that they take the necessary measures to solve "to a large degree" the parties' needs. They have already defended themselves before the Ministry of Justice of the Andalusian Administration where they have shown their capability to assume the personnel and material resources that are required in the event of adoption of the requested measures.

Remember that the Tourism, Regeneration, Justice and Local Administration Commission (Andalusian Parliament) approved in December 2019 a Non-Law Proposal (PNL), to request an elevation of category in the aforementioned judiciar parties. The Council was asked by Government to press the central Executive to create positions for magistrates.

‹ ›
Keywords:
JuntaRespaldaJuecesPonientePeticionesElevarCategoriasMagistrados
Your comment has been forwarded to the administrator for approval.×
Warning! Will constitute a criminal offense, illegal, threatening, offensive, insulting and swearing, derogatory, defamatory, vulgar, pornographic, indecent, personality rights, damaging or similar nature in the nature of all kinds of financial content, legal, criminal and administrative responsibility for the content of the sender member / members are belong.
Related News