The Board defends the Environment staff's work in caring for 'La Pena' de Seron.

Raquel Espin was the delegate for Sustainable Development and participated in the Provincial Environment Council. 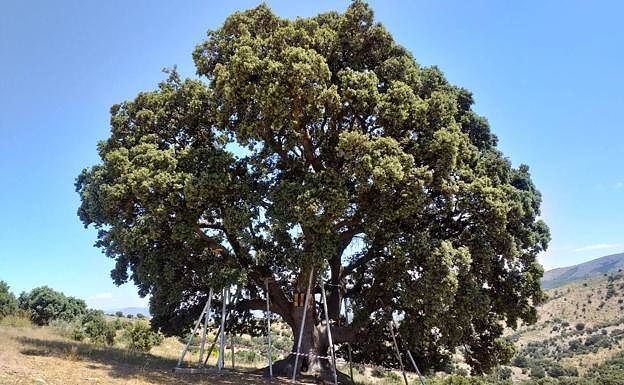 Raquel Espin was the delegate for Sustainable Development and participated in the Provincial Environment Council. It was held at Francisco Villaespesa Library, the capital. The meeting discussed issues related to biodiversity and natural heritage conservation. It also highlighted the possibility of approving a restoration project for La Peana, located in Seron.

The current status of this Natural Monument was presented to the Council. Staff from the Junta de Andalucia have been alerted "at all times", carrying out evolution and monitoring actions as well as verifying that crack stability is maintained. Delegate said that "in just days a first, more specific emergency action was taken and then a second, more precise one with the collaboration of Ministry of Agriculture, Livestock and Fisheries and Sustainable Development, through their Health laboratory Vegetal, which has carried out all the analyses necessary to analyze the state of the largest tree of Andalusia.

The Board highlighted the valuable work of the Environment workers in conserving and caring for 'La Peana. They have confirmed that the crack is approximately 4 meters in length and 8 cm wide. It runs from the base to one the main branches.

A restoration project, promoted by Encina La Peana Natural Monument Association, was also presented. The Council members have decided that the Territorial Delegation technicians should review the project. This is due to the fact that it involves 19 to 29 concrete foundations measuring one meter by one meters up to one meter deep.

The landowners of 'La Peana,' as well the local environmental groups, congratulated Junta de Andalucia on their work. They also praised the Junta de Andalucia, for fulfilling its promises with fencing and signage installation, which will be installed shortly, and all the tasks that the REMTA service is performing.

Maria Algaba (head of the Protected Natural Areas Service) presented the Annual Report of activities and results in Protected Areas of Natura 2000 Network. This report corresponds to 2021. Vicky Schwarzer, from the AMAYA agency, also announced the flora conservation activities carried out by Network of Botanical Gardens of Almeria.

Emilio Retamosa (head of the Hunting Department) presented the draft of the "order approbating the methods for controlling hunting predators and establishing accreditation of those who control them in the Autonomous Community of Andalusia". Both environmentalists as well as members of the Andalusian Hunter Federation agreed that hunters are important for protecting the environment from poachers.

‹ ›
Keywords:
JuntaDefiendeLaborPersonalMedioAmbienteCuidadoPeanaSeron
Your comment has been forwarded to the administrator for approval.×
Warning! Will constitute a criminal offense, illegal, threatening, offensive, insulting and swearing, derogatory, defamatory, vulgar, pornographic, indecent, personality rights, damaging or similar nature in the nature of all kinds of financial content, legal, criminal and administrative responsibility for the content of the sender member / members are belong.
Related News