The Board approves the repair of the company in the eleven-kilometers of the A-334 that runs between Purchena & Fines.

The Ministry of Public Works, Infrastructure and Territory Planning awarded 886,253 euro to the joint venture of CHM and Padelsa, for the complete repair of the A-334 road's surface between the districts of Purchena, Olula del Rio and Fines in the province of Almeria. 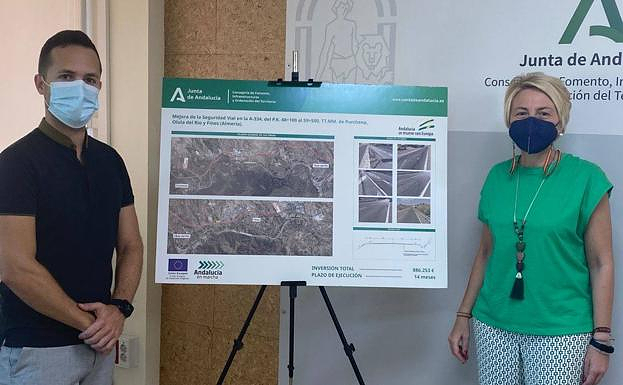 The Ministry of Public Works, Infrastructure and Territory Planning awarded 886,253 euro to the joint venture of CHM and Padelsa, for the complete repair of the A-334 road's surface between the districts of Purchena, Olula del Rio and Fines in the province of Almeria. Eloisa Cabrera (territorial delegate for development in Almeria) highlighted the importance and "substantial improvement in traffic on a segment of track where no comprehensive action was taken since its commissioning, 30 years ago."

These works are 80 percent co-financed by European Feder funds and focus on the section of A-334 highway which runs from the Purchena version, at km 48, to the beginning of its conversion from an Almanzora motorway to a conventional road, at km 59.

Although the road has seen a lot of traffic since its inception in 1990s, there have been no palliative conservation efforts. It is a road that sees nearly 12,000 vehicles per day and 5% trucks. This section has suffered a significant decrease in its structural capacity due to the lack of major maintenance.

The intervention will include the application of a hot bituminous mixture to the roadway. The pavement will also be milled in sections if necessary to maintain its grade. The milling and subsequent paving will take place between the road edges, so it won't affect the existing safety barrier. In the opposite, if the existing road course has not been milled and there is a safety bar, that barrier will be removed and replaced with current regulations. Road markings will also be replaced.

The road safety improvements on the A-334 are in addition to the investment that the current Andalusian government has made since day one to improve communication in the Valle del Almanzora. Nearly 50 million euros has been spent on the Almanzora Highway (A-334) in the last two decades. These works started 15 years ago. To date, traffic has been restricted to 22 km between Fines, El Cucador, and Fines.

El Cucador–La Concepcion is close to completion. Its construction began in September 2019, costing 25.6 million euro. The project was completed six months ahead of schedule. With a budget of 24 millions euros, work began on the section connecting the new motorway to the Autovia del Mediterraneo. It will provide a solution not only for the Almanzora residents, but also for the marble sector, which has been waiting for many years for a direct route to transport its goods to the Mediterranean coast.

‹ ›
Keywords:
JuntaAdjudicaFirmeKilometrosPurchenaReparacionA334OnceFines
Your comment has been forwarded to the administrator for approval.×
Warning! Will constitute a criminal offense, illegal, threatening, offensive, insulting and swearing, derogatory, defamatory, vulgar, pornographic, indecent, personality rights, damaging or similar nature in the nature of all kinds of financial content, legal, criminal and administrative responsibility for the content of the sender member / members are belong.
Related News